Store Page
Transport Fever>  Workshop > Co-Chief Scrub's Workshop
This item has been removed from the community because it violates Steam Community & Content Guidelines. It is only visible to you. If you believe your item has been removed by mistake, please contact Steam Support.
This item is incompatible with Transport Fever. Please see the instructions page for reasons why this item might not work within Transport Fever.
Current visibility: Hidden
This item will only be visible to you, admins, and anyone marked as a creator.
Current visibility: Friends-only
This item will only be visible in searches to you, your friends, and admins. 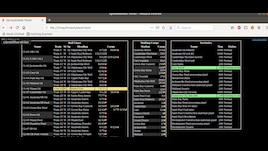 This item has been added to your Subscriptions. Some games will require you to relaunch them before the item will be downloaded.
Description
*Spreadsheet Fever*

Spreadsheet Fever is Transport Fever UI mod that bypasses the game's internal UI. We do this mostly for performance, but also to declutter the game's window. The mod updates a log of stopped trains on every frame, and generates an html overview of rail and factory activity once per second. Note: this mod uses TF's mission infrastructure, and therefore can only be used in free-play mode, not campaign mode.

Before this UI, I kept a vehicle overview window opened for every train, so that I could see when train became blocked, unable to find a path the the destination in the first place, or otherwise bothered, as well as to eyeball each line's source factory outputs. This slowed the game to a crawl. With vehicle and ka-ching icons disabled in the central HUD menu, I was able to get about 4fps running below 1x speed with 55 train windows opened. (I had to close half the windows to avoid severe lag when laying out track while paused.) After the mod, with train windows eliminated, I can get around 40fps at a smooth 4x speed.

I haven't tried to measure the impact of this mod's lua code on the TF engine, but it feels minimal. As for the increased CPU load from the web browser reloading a small page every second, it shouldn't be an issue. I've never seen TF fully utilize 2 cores on Linux (it consistently stays around 1.5), while my 9 year old CPU has 4 cores and 8 threads.

Alpha: So far, this mod is confirmed to work on Ubuntu 18.04 with firefox. I don't expect problems from other browsers, other UNIX variants, or MacOS, but I do expect problems with Windows. scripts\\init.bat probably contains errors right now, so Windows users might want to try this script manually before enabling the mod in TF.

When the game starts, follow the directions in the Observer dialog box:

This dialog box is the only native UI element in Spreadsheet Fever. To see the rest, point your browser at file:///tmp/tf-dash/dash.html, and run tail -f /tmp/tf-dash/stop-log.txt in a terminal. (In windows, these paths are relative to the drive where Steam is installed.

There are a few config options, which you can control by adding a .tfdashrc or tfdask.rc file to your home directory based on the following template (which you can find in mods/settings.lua relative to your TF install path):

If you have trouble loading your config in Windows, set %HOME% or both %HOMEDRIVE% and %HOMEPATH% appropriately.

Relative to the TF mods/urbanspreadsheets_webdash_1 directory, we have a few interesting files:

I've scribbled my thoughts on where to go from here in wishlist.md.

The Spreadsheet Fever dashboard is very much limited by TF's lua api:

No view into train "waiting for path"/"unable to find path" status, we just complain when a train's speed drops to zero when not at a station.

No breakdown of cargo or people waiting at a station by line or even by terminal.

No way to see the advertised production rate of a factory. We see some stats, but nothing corresponding to the rate shown in in-game overview windows.

Time is weird. With the default settings, each day of Calendar time equals 2 seconds of vehicle time. We get them both through a single function game.interface.gameTime() merge both into a single number, then disentangle them when generating stop-log messages.

All source files are copyright by their respective authors, while images in the www/ dir are copyright Urban Games. If you download this mod without buying Transport Fever, you are pirating icons! Icons, I tell you!

VacuumTube Sep 1, 2019 @ 3:27am
About the performance... I just tried it on my old savegame with a lot of trains. I had 7 fps with the mod and 25 fps without. So with a little vehicles the impact might be little but not with a lot because I think the data about all the trains, lines and industries is calculated every frame.

Co-Chief Scrub  [author] Aug 23, 2019 @ 8:01pm
@VacuumTube Thanks for all the feedback. Despite my laziness, I do appreciate it. @canophone has a fix for the time format just after you in the comments. I'll apply fixes and take a look at the rest real soon now. As for the <drive>:\tmp question, the docs already talk about the steam drive, but a concrete example as you suggested would probably stand out more.

It looks like my eu4 campaign can end in a world conquest (my first), but these last few decades are taking forever. My people have no war exhaustion, but I have plenty on their behalf.

VacuumTube Aug 23, 2019 @ 2:52pm
Ok I finally found the log file and html on windows (the root dir of steam, for example D:\tmp\tf-dash). Another problem was that you assume, the script is in mods/urbanspreadsheets_webdash_1/... but I had a different folder name (how is this even gonna work in the workshop folder?)

VacuumTube Aug 23, 2019 @ 2:24pm
Why are you asserting if there is content in lines? There is always after running the batch script.

VacuumTube Aug 23, 2019 @ 1:53pm
To the bat file on windows:
-there is no deltree
-the copy commands and the mkdir maybe dont work because of the directory relations
< >