Greenlight > Games > WisKids's Workshop
Greenlight is being retired. For more information on how to submit games to steam, refer to this blog post.
This item has been removed from the community because it violates Steam Community & Content Guidelines. It is only visible to you. If you believe your item has been removed by mistake, please contact Steam Support.
This item is incompatible with Greenlight. Please see the instructions page for reasons why this item might not work within Greenlight.
Current visibility: Hidden
This item will only be visible to you, admins, and anyone marked as a creator.
Current visibility: Friends-only
This item will only be visible in searches to you, your friends, and admins.
Toy Wars Invasion
Description Discussions3 Announcements6 Comments131 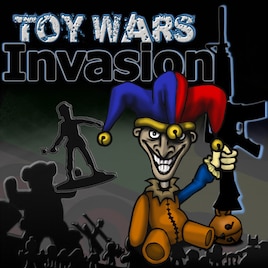 WisKids
Offline
See all 21 collections (some may be hidden)

Thanks for the support, the game has been released on Steam and can be purchased from the store.

Here's the direct address to the store page:
store.steampowered.com/app/346490

We just wanted to say thanks for the votes and to let you know we are working on updating the game in readiness for a Steam specific release in April 2015.

Inspired by the first Toy Story movie and Sid the evil boy next door who hacked and abused his toys, we have you playing as a toy where you must fight off the abused and unwanted toys of the world.

Originally posted by Developers_Accomplice :
I’ve played the Beta and found it enjoyable. I think it’s a great concept and one which I’ve not come across before. - www.developersaccomplice.co.uk

Environment
Because you play as a toy, this gives you an opportunity to view the world in a new perspective as everyday objects that people take for granted are large for a toy.

The world is interactive and at times you can use objects to your advantage such as shoot a basket off a table to disable attackers.

Objectives
The various maps have differing objectives, with some maps having multiple objectives.

... and with random path selections you’ll never know what to expect.

Enemy
There are 21 enemy classes that attack, all with varying skills and attacking prowess.

For example there are the Wizards, Jack-in-the-Boxes who are full of surprises (sometimes good) and the plastic tan soldiers who may launch an attack from their choppas. Of course, no unwanted and abused toy collection would be complete without some old, scraggy and deformed bears … beware the Cyborg Bear with his attached jet pack and nerf gun arm.

Vehicles
We also have vehicles with attached pirate cannons and MG’s, not to mention some slot cars which you can take for a spin around the slot car tracks or the model trains which you get to drive around the toy shop.

Weapons
There are multiple weapons available for purchase from the Toy Box. The Toy Box appears at various times enabling you to upgrade your weapons and purchase health packs (useful especially when the wizards are about !). All weapons are based on toys or an item that could be modified to become a toy weapon.

Some of these weapons include:

Repeatable
Maps have random enemy spawns and a difficulty scaling that adjusts as more people join the battle plus random path selections that enable maps to vary between play.
Popular Discussions View All (3)

Toy Wars Invasion has been Greenlit and is now listed in the Steam store. For the latest information, purchase options, and discussions for Toy Wars Invasion, please see it on the Steam Store or in the Steam Community.
Visit Store Page
For more details Visit Community Hub
For latest discussions
If you really, really want to, you can continue to the Greenlight page. Information on this page may be out of date, since all the action has moved to the areas noted above.