Store Page
Left 4 Dead 2>  Workshop > CrazyRabbit's Workshop
This item has been removed from the community because it violates Steam Community & Content Guidelines. It is only visible to you. If you believe your item has been removed by mistake, please contact Steam Support.
This item is incompatible with Left 4 Dead 2. Please see the instructions page for reasons why this item might not work within Left 4 Dead 2.
Current visibility: Hidden
This item will only be visible to you, admins, and anyone marked as a creator.
Current visibility: Friends-only
This item will only be visible in searches to you, your friends, and admins. 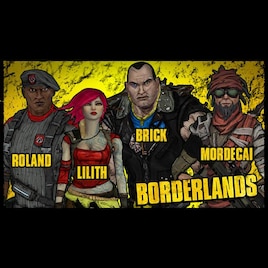 CrazyRabbit
Offline
See all 499 collections (some may be hidden)

This item has been added to your Subscriptions. Some games will require you to relaunch them before the item will be downloaded.
Description
Brick, replaces Coach. "Brick's here, ♥♥♥♥♥♥♥!"

TRIVIA
Brick's name and appearance may be a reference to that of the character Brick Bazooka from the film Small Soldiers, who wore similar clothing, was proficient in artillery, and was similarly psychotic. http://goo.gl/DJ6MDk

Lilith, replaces Rochelle. "With me around, you might actually get somewhere."

TRIVIA
Lilith is a name with origins in Judeo-Christian mythology spanning thousands of years. The name has been associated with demonic and elemental entities, often portrayed as a seductress redhead woman.

Mordecai, replaces Ellis. "Sure I'll join ya, just leave the big game to me."

TRIVIA
The name Mordecai may be a reference to a pet falcon named Mordecai (seeing as Mordecai has a bloodwing which is similar to a pet falcon) in the movie "The Royal Tenenbaums" By Wes Anderson.

Roland, replaces Nick. "Your chances of winning just got better"

TRIVIA
Early concept art of Roland depicted him as a caucasian male with dark and graying hair. Though his design has since been changed, these early concepts show a very strong resemblance to Dr. Zed- meaning that it is possible that these early designs were recycled and used for the doctor.

CrazyRabbit  [author] Jul 30, 2017 @ 3:54pm
I know, I deleted that because it messed things up with other mods. I'll update the credits if that's what you're referring too.