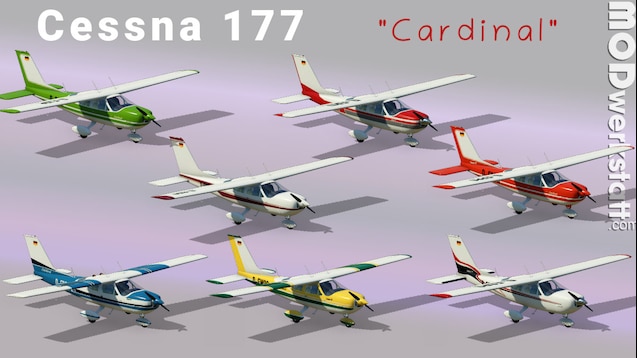 Bandion
Offline
See all 53 collections (some may be hidden)

This item has been added to your Subscriptions. Some games will require you to relaunch them before the item will be downloaded.
Description
The Cessna 177 Cardinal is a light single-engine, high-wing general aviation aircraft that was intended to replace Cessna's 172 Skyhawk. First announced in 1967, it was produced from 1968 to 1978. The Cessna 177 was designed in the mid-1960s when the engineers at Cessna were asked to create a futuristic 1970s successor to the Cessna 172. The resulting aircraft featured newer technology such as a cantilever wing lacking the lift struts of previous models, and a new laminar flow airfoil. The 177 is the only production high-wing single-engined Cessna since the Cessna 190 & 195 series to have both fixed landing gear and a cantilever wing without strut bracing.

RolandBP Sep 18, 2019 @ 5:40am
Another Excellent aircraft for the short hops.
I love having one of each of your aircraft, with different speeds, so I can watch a faster one overtake a slower one just ahead.