Store Page
Age of Wonders III >  Workshop > Gladen's Workshop
This item has been removed from the community because it violates Steam Community & Content Guidelines. It is only visible to you. If you believe your item has been removed by mistake, please contact Steam Support.
This item is incompatible with Age of Wonders III. Please see the instructions page for reasons why this item might not work within Age of Wonders III.
Current visibility: Hidden
This item will only be visible to you, admins, and anyone marked as a creator.
Current visibility: Friends-only
This item will only be visible in searches to you, your friends, and admins. 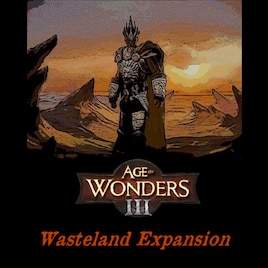 Gladen
Offline
See all 52 collections created by Gladen and other people (some may be hidden)
You need DLC to use this item.

This item has been added to your Subscriptions. Some games will require you to relaunch them before the item will be downloaded.
In 1 collection by Gladen
A minor collection of mods

12 items
Description
The Wasteland Expansion
This expansion will feature the return of the Nomads as its own race in the world of Athla. Nomads as a race have been finally included in the project in what began as a campaign project only where I finally took the decision to expand the content further with a new race. Most of the planned nomadic content around race has been included and integrated into the campaign so they are playable and fully set up.

So far players will encounter bugs and traces of what could be remains of the Human race. There could be abilities and requisites that can be leftovers from other races. The Nomad race strives to be balanced in comparison to the other 9 vanilla races available in the game. So any inconsistencies that may seem inappropriate should be reported.

The Wasteland Campaign
This is the campaign following the after story of what happened to the outlaw faction Nomads. You will progress the campaign with two different leaders and move on Athla’s world map together at the same time with the characters. The Wasteland Chapters storyline follows Sundrens and Edwards campaigns in the background explaining a story point from a different view. You will encounter familiar characters and new faces as you progress with either hero. The Wasteland alliance is the main faction in the story and, on the world map, your colour will be orange.

I’m developing a series of scenarios that are taking the original campaigns of Elven Court and Commonwealth a bit further. This by adding a third story branch that is following the same timeline as Edward and Sundren stories. Reynald and Tanner will be the main leader of the story and you will intervene with both characters on almost all scenarios.

Mission 4d – Tale of the firstborns
Mission 5a – Sundren’s revenge

Regarding campaign and mods
Each scenario utilizes new things and progresses differently with scripts. The player can only use one leader at time and progress with fewer heroes on each main story branch.

The campaign only uses base content available from the original game and DLC. This is to ensure compatibility and not force players to use other mods only to play this campaign or depend on other mods to receive updates.

New custom content
To further establish the content of this campaign I also intend to add custom things. I will make this out time, but priority is to finish the campaign with its story while the new content will be secondary and included as a bonus.

Things needed to be done for later:
Balancing the Nomad racial lineup
Tuning some icons and models
Altering, balancing and improving the racial governance tree
Updating the campaign content with Nomads
Finishing the Horn of Kesh mission
Adding more and new abilities
Revising text and grammers

Bugs & feedback
The English language is not quite the best currently and there should be plenty of mistakes grammatically. If you find a mistake, I would be happy to apply changes if you discover something quirky during your playthrough that is either by the quests, story or dialogues.

If you get stuck on a scenario where you cannot press a button or cannot continue at any given moment, please report this and I will do whatever I can to fix it quickly.

Regarding balance for the campaign difficulty, it is set to be around intermediate for Reynald’s story and hard for Tanner’s story.

Other
Did you enjoy this campaign? Consider trying my other campaign of the Shadow Realm Community Expansion!

Also available in a wiki.

Legal stuff
This mod reuse story content from the original campaigns of Triumph Studios such as screens, maps, characters and background content. World maps were made using the psd* template provided by Triumph Studios for custom campaign creation.

Custom characters are all part of this campaign and in scenarios provided for a fun experience towards the AOW III universe and community.

Gladen  [author] 21 hours ago
You could essentially try steam workshop subscribing. A few times. I don't see a problem really. At some point I could share files through Dropbox if necessary.

But I'm gone for 1 months from tomorrow. So I don't got time. In August/September I plan to update content fully. I just need to create alot of stuff.

kaanis07 21 hours ago
Ok thanks for the help ill be looking on here to see if theres any updates i can do to get this working, have a safe vacation

Gladen  [author] 22 hours ago
So you're missing about roughly 32 files..

Hmm.. I might split of the campaign to make it separate from the content at some point. But I'm unable to do this in a short time frame. Due to vacation and I cannot update the content at the moment on steam workshop.

So far your are quite unique as being the only one having taf files not able to unpack properly even...from Nexus which should fix steam workshop problems

Gladen  [author] 22 hours ago
And how many files? I get it to 88 files/2 folders from the latest rar package "Wasteland 1.14 Expansion" containing the taf.

kaanis07 23 hours ago
no the taf isnt there, the wastelanders folder in the usercontent is showing 164mb

Gladen  [author] 23 hours ago
Should be 195 mb. Is the taf still there? I'm user content and the folder?

Gladen  [author] 23 hours ago
How big is the folder now?

kaanis07 23 hours ago
the size of the folder is 164 mb, its only the wastelanders campaign folder thats in the usercontent file no other mods or taf

kaanis07 23 hours ago
So i put in the latest taf compressed it then mounted with Daemon tools into the usercontent file, now the wasteland mod is showing up in the launcher and when i start the game i see a different character than i did before which i believe is the character for the wasteland campaign, its still just stopping at preparing game and wont let me start it, i tried running it on low graphics but its still just sitting there at preparing game and wont start the actual campaign
< >