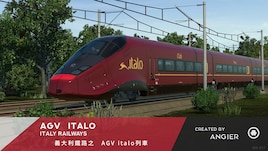 angier023
Offline
See all 104 collections (some may be hidden)

This item has been added to your Subscriptions. Some games will require you to relaunch them before the item will be downloaded.
Description
AGV italo is a high-speed train in Italy operated by NTV. This train was designed and built by Alstom.

Note. About the Headlights & Taillights
There is a limitation to this game. It's unable to make the light shine when the light is placed behind the glass. The only way is to remove the glass but I consider it to be destruction to the bullet train's frontal shape. Therefore I chose to not do it.

For those who has the interest toward my future production, Currently I have two goal. First, I intended to make a High-speed train of the world series. Since most of the High-speed train in the workshop are from Germany, France and China. So I decided to start making High-speed train from other countries such as say Japan and Italy, Second, I also going to make a series of trains of my country, Taiwan.

https://www.paypal.me/angier023
P.S. Of course. It's under the premise of you are not struggling with your life, I won't die if you are unable to feed me! Haha~ So don't feel compelled to do that and I will continue to release mods in the future. Have a good day!

GT2308 Jul 25, 2019 @ 7:51am
I love the Model, its awesome. However I believe the perfomance stats are a bit off (im not refering to capacity). According to the Italian Wiki page, which specifies the exact performance figures for the Italo model:

Which gives a p/w ratio of 20.43 rather than 17.39. Which explains why its much slower than the TGV models you just released.

Actually, I put in the realistic seat number in the coding file. It's automatically divided by 4 by the game. You will get roughly the real train capacity if you multiplied the current number by 4. And yes, those trains have low capacity in the real world as well.

Also, I have no intention to tailored those figures to suit individual needs. I don't have the time to do all those variants. You must understand that.

Mobius_22 Jul 24, 2019 @ 2:13pm
I agree with ItsBurn2016, I find the passenger capacity rather low on some of your mods. I know they need to be reduced from real life for balance reasons, but it should probably be comparable to how they are balanced in the base game. The base game TGV of similar length to this train can fit 150-ish people I think (I cannot remember off the top of my head). I think most people divide the real passenger number by 4 or something like that.