Store Page
RimWorld>  Workshop > Kikohi's Workshop
This item has been removed from the community because it violates Steam Community & Content Guidelines. It is only visible to you. If you believe your item has been removed by mistake, please contact Steam Support.
This item is incompatible with RimWorld. Please see the instructions page for reasons why this item might not work within RimWorld.
Current visibility: Hidden
This item will only be visible to you, admins, and anyone marked as a creator.
Current visibility: Friends-only
This item will only be visible in searches to you, your friends, and admins. 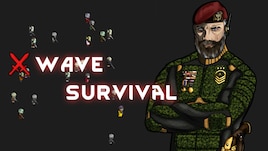 This item has been added to your Subscriptions. Some games will require you to relaunch them before the item will be downloaded.
In 1 collection by Kikohi
All my mods

This mode is designed to be more fast-paced and combat-focused than the standard game mode. It allows you to skip most of the tedious early game resource grinding and slow buildup of vanilla RimWorld. Build your base quickly and then defend it from wave after wave of raiders until your colony inevitably collapses spectacularly.

Features
Fast Buildup
- When you start the game, you will have 5 1/2 days to build up your base before the first wave hits. Use this time to bunker-down and make sure you are in a location that you can defend from invaders.

Waves of Raiders
- Once the raids begin, you will be raided every 48 in-game hours.
- Raids start out small and grow at a steady pace with each wave. The raid sizes are determined by the number of waves you have survived, as well as the wealth of your colony.
- A timer counts down the exact time until the next wave, so you always know exactly how long you have to prepare.
- Every 4th wave will be a special raid, which can be either sappers, siegers, drop pod raider (and their variants), psychic/poison ship part crash, manhunter pack wave.
- Each 30 waves, a tremendous raid happen. Raiders from one faction gather to attack you! Usually, at the start it's 2 times harder than normal raids.

Resource Drops and Reinforcements
- Resource drops happen every 24 in-game hours. These resource drops bring you random amounts of building materials, enough food to keep your colonists and prisoners fed, silver, and occasional medicine, weapons, armors.
You will also start to get prosthetic after the wave number 60.
- Hostile people might sneak in your supply, be safe! (low chance).
- Warning! The beacon need to be totally outside, or it might break your roof (no worries for inside beacons it will choose an outside one).
- New colonists will join on occasion to help you out. The lower your population is, the more likely you are to get reinforcements.
- Traders happen frequently, both orbital and caravans.

Note
- To play the game mode, make sure you select the Wave Survival storyteller (not replaceable).
- The included Wave Survival Mode Default Scenario gives you the technology for turrets and for the Orbital Trade Beacon that is needed in order to receive the daily resource drops. You need to use this scenario, or any other if you add as a permanent game condition "Wave Survival Mode".

- Not yet compatible with already started save game (don't try to change the storyteller).

- Join us on discord: https://discord.gg/sT4zdXt
I'm accepting mod request and will consider each one of them! (in #request or private message)

Special Thanks
This is basically a remake of the Justin C mod, idea goes to him as well as some part of code. Updated to work with 1.0, added a lot of other features.
Special thanks to Redfog, who tested the mod wich helped me make it stable, and to Mehni who helped me with some stuff.
Special thanks to Philbro for the awesome Storyteller artwork. To see more of Philbro's work you can check out his DeviantArt page:
http://philbro.deviantart.com/
Popular Discussions View All (2)

Kikohi  [author] Sep 30 @ 4:14am
If you have a comm-console, it will swith to orbital trader instead of caravan traider. Another solution is to disable the "More traider" option in settings.

Dillon Pocce Sep 27 @ 11:06am
i get traders every day which sounds nice but is really annoying since they get in the way of my defenses. Is there a way i can change their rate on a current save?