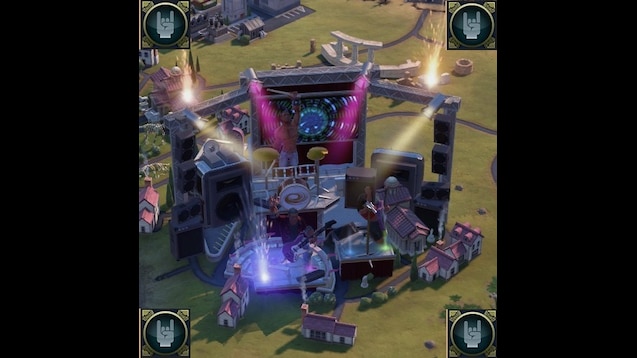 Nerevatar
Offline
See all 92 collections (some may be hidden)

This item has been added to your Subscriptions. Some games will require you to relaunch them before the item will be downloaded.
Description
Overview
Rebalances Rock Bands in several ways to make them more fun to use, and less about being lucky.

1) They will die less, but their tourism output has been greatly reduced.
2) Their cost has been greatly increased since they will now live a lot longer and thus be able to produce more tourism for you during their expected lifetime.
3) Promotion selection have been improved, to make them more equal and viable. Now the decision will depend a lot more on who you want to use that particular unit on.
4) Makes Rock Bands slightly less explosive to make the rest of the Culture game more relevant.
5) Rock Bands will be more about smart play than luck.

Details
The current setup makes it very binary: Either your Rock Bands die right away and do nothing OR your Rock Bands become gods and win you the game singlehandedly. This mod attempts to rebalance Rock Bands, to make them 1) less dominant and 2) less dependent on luck.

First of, lets take a look at why Rock Bands are dominant. The formula for tourism generation from rock bands are as follows:

As can be seen from the above, Rock Bands in vanilla GS is extremely powerful, to the point of making many other parts of the culture game inconsequential. This is especially true, since you just need to use rock bands on the leading culture civ, and not on all civs, since cultural victory technically only requires you to beat the opponent with most culture.

Lets then have a look at the luck aspects of Rock Bands. Without going into the math behind it (have a look in the civfanatics thread if you are interested), I'll post the original changes for Rock Bands survival rate, and promotions. Note that this mod caps the level of Rock Bands at 3 instead of 4, to reduce the "immortal-ness" at high levels.

Moving on to the scaling aspect - Album Sales. These makes a HUGE difference. In the example from the formula, try to replace album sales of 500 with 0. It turns 8000 tourism into 3000. Same logic applies: Since Rock Bands now live longer, the scaling Album Sales needs to be tuned down to not make Rock Bands even more dominant then they already are.

Check out my other mods
Rebalanced Secret Societies mod: https://steamcommunity.com/sharedfiles/filedetails/?id=2406253078 rebalances the Secret Societies to reduce power creep, enhance flavor. Includes malus to give some hard choices and rework of Voidsingers!

Inland Flooding mod: https://steamcommunity.com/sharedfiles/filedetails/?id=1690507099 if you want climate change to be 1) more impactful 2) more fair so it affect both coast and inland cities.

Cosmic Fox Jun 1, 2020 @ 3:30pm
good job. Now if someone would get rid of the silly religion I would be happy. I am a very spiritual person mind you, but the units they put into div are not anything but annoying. Granted you can get a few buffs from religion. Overall like real life, organized religion is just a headache. lol Thanks for the effort