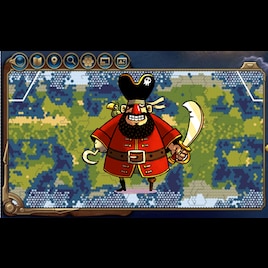 Nerevatar
Offline
See all 15 collections (some may be hidden)

This item has been added to your Subscriptions. Some games will require you to relaunch them before the item will be downloaded.
Description
Puts the SEA back into Seven Seas. Increases the number of water tiles, to make the seas more relevant to gameplay (most civs will have access to each sea) and increase the chance of amazing Canal spots. As requested from Civ Fanatics.

There is comparison shots using my (as of writing) current map and game seed (1983178027, large). I have also added an annotated version. Red numbers is canal spots - canal 2 uses a natural wonder which does not show as a lake in the minimap. Yellow numbers are for the seas.

Civs by sea list:
Note that all except Sea 6 can be connected easily using canals.

In comparison to the same setup but without the mod:
Summed up, Sea 4, 5, 6 and 7 is pretty much just isolated lakes with very little significance, while sea 1-3 is still important but with less interesting geography and with only the possiblity to connect sea 1 and 2 (Panama Canal not withstanding).

I also recommend checking out my other mods
Better World Congress : https://steamcommunity.com/sharedfiles/filedetails/?id=2429588635 Improves the World Congress by reworking most Resolutions. Generally, if you pick the right side (A vs B) you will get some part of the effect, while the actually winner will get an even more powerful effect. Upping the stakes also helps to make WC feel more interesting and impactful.

Inland Flooding : https://steamcommunity.com/sharedfiles/filedetails/?id=1690507099 if you want climate change to be 1) more impactful 2) more fair so it affect both coast and inland cities.

Rebalanced Rock Bands : https://steamcommunity.com/sharedfiles/filedetails/?id=1780021591 rebalances the Rock Band unit to be more about smart play then just being lucky. Also makes it slightly less explosive / win-y to make the rest of the Culture Victory relevant.
< >
8 Comments

Pliny the Gamer Jul 16, 2019 @ 7:43am
Sorry for not being clear. I'm generally seeing very few spots where a canal or GG Bridge could be built... too much water. Perhaps two or three within a viable distance from my start location and maybe eight or nine over the whole map.

Of course, this could simply be bad luck on my part with the map seeds, if others are not seeing the same thing.

Pliny the Gamer Jul 10, 2019 @ 9:54pm
I'm liking the map script (as well as your other mods) but using random map seeds, I'm generally seeing mostly larger bodies of water, too big for building connections. Would it be possible to tweak the script a bit further or potentially add in the sea level parameter?

One thing I do like about the script is that I'm seeing more continguous (and bigger) deserts. Makes Petra all the more valuable! :)

Nerevatar  [author] Jun 26, 2019 @ 11:12am
Thanks for up-rate :) I hope you find them enjoyable. I'm always open to feedback on any of my mods, so please leave a comment if you have some suggestions/feedback. That goes for everyone of course.

Nerevatar  [author] Jun 25, 2019 @ 11:57am
Good point :-) I have added comparisons from the same game seed, map seed, and civ selection to make them as comparable as possible. I added both a "clean" version with just the minimap, and also an annotated versions where I point of things of interest.

The posted seed is the one I'm currently playing personally - it's great ;-)