Greenlight > Games > SUPERHOT's Workshop
Greenlight is being retired. For more information on how to submit games to steam, refer to this blog post.
This item has been removed from the community because it violates Steam Community & Content Guidelines. It is only visible to you. If you believe your item has been removed by mistake, please contact Steam Support.
This item is incompatible with Greenlight. Please see the instructions page for reasons why this item might not work within Greenlight.
Current visibility: Hidden
This item will only be visible to you, admins, and anyone marked as a creator.
Current visibility: Friends-only
This item will only be visible in searches to you, your friends, and admins.
SUPERHOT
Description Discussions211 Announcements3 Comments3984

SUPERHOT
Offline
See all 1043 collections (some may be hidden)
Kickstarter

View SUPERHOT in the store

Our Kickstarter campaign is slowly coming towards an end - with mere two days left we want to make one final push and try to get past the $300,000 mark! 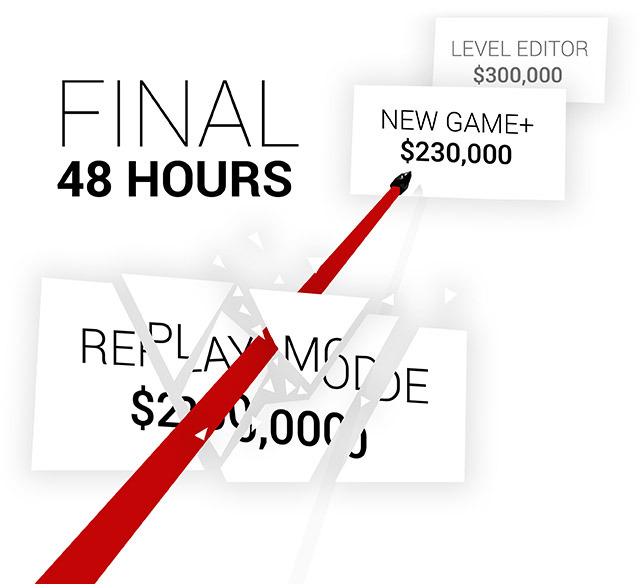 This is it - we need your help to make the SUPERHOT level editor a reality! Tell your friend, tell your parents, tell your grandparents, neighbors, and everyone else you can find. Don’t get discouraged if you don’t have a credit/debit card - as of yesterday, you can pre-order the game using PayPal.

Finally, a big 'thank you' to everyone who has backed the game already - our entire team is really grateful for your support.

SUPERHOT and Oculus VR at E3!
For the last two weeks we had the opportunity to work with the amazing guys at Oculus VR. The result of our work was an all-new SUPERHOT demo designed especially for the Oculus Rift DK2, which is being showcased at E3 in Los Angeles.

While we couldn’t go there ourselves (wild mountains of paperwork appeared out of nowhere), we’re really glad that the people who tried out the new demo had fun playing and dodging bullets. You can read more about it on GameInformer[www.gameinformer.com], The Verge[www.theverge.com], Mashable[mashable.com], Destructoid and IGN!

Cliff Bleszinski will design an arena for the game!
That's right! Cliff Bleszinski - the legendary designer behind Jazz Jackrabbit, Unreal and Gears of War is going to design one of the stages for the Arena Mode in SUPERHOT!

"Grand Prix" and "Best Gameplay" at Pixel Heaven!
At the end of May we went to Warsaw for Pixel Heaven 2014 - an event focused on retro consoles, indie gaming and pinball. We gave a short talk about the development process...

… and we also won in the “Grand Prix” and “Best Gameplay” categories at the Indie Basement awards! The competition was fierce and we're really happy that the judges liked our prototype so much :)

SUPERHOT FAQ
By the way, if you have some unanswered questions be sure to check out our FAQ Update on Kickstarter - it features a lot of info about the game, the campaign and more!

And that's it for today! Thanks for reading, and see you when the Kickstarter campaign ends!

After a while of experimenting with new features, pushing the artwork forward and adding new content, we are ready to enter the next stage of making SUPERHOT an amazing game! We just started a campaign on Kickstarter to fund the full production and we need your support!.

Read More
Description
SUPERHOT. IT'S ABOUT TIME.
"Brilliant. FPS where time moves only when YOU move. Slick, clean, even the tutorials don't f&#k around."
Cliff Bleszinski, Co-creator Jazz Jackrabbit, Unreal, Gears of War.

"Like you're playing through Quentin Tarantino's version of the Mad Men opening credits."
Philippa Warr, Wired

"Imagine a FPS where time only moves when you do? Oh, it's been done. #superhotgame"
@PeterMolydeux

SUPERHOT is an FPS game where time moves only when you move. The innovative time control mechanics create gameplay never seen before. TAKE YOUR TIME! Get rid of aggressive enemies with grace, style and the intense satisfaction. Watch them fall while you're dancing in a hail of bullets. With limited ammunition and unforgiving foes every level of SUPERHOT becomes a deadly puzzle.

YOUR SUPPORT CAN TAKE IT FURTHER.

Think about falling into a ballroom full of enemies. Through a glass ceiling. With shatters of glass everywhere and enemies firing at you. As you fall, everything moves fast and suddenly STOPS when you land. With debris and bullets roaring slowly all around, you plan your dance - killing your foes WITH STYLE.

Fight enemies that dodge your bullets like you dodge theirs. FINALLY WORTHY ADVERSARIES. Predict their moves, outsmart and CHECKMATE THEM INTO A CORNER, storming with bullets. Prove your MASTERY OVER TIME itself.

Witness explosions in glorious SUPERHOT slow motion. Fragments of concrete flying around... while YOU WALK. Not even looking at the explosion. Cool guys don't do it. SUPERHOT guys don't even think about it. GRAB THE GUN and throw yourself into this condensed hell where YOU MAKE THE RULES. You decide WHEN IT'S TIME.

Make Steam go SUPERHOT. (It would be physically accurate!).

Steveskeleton Jan 17 @ 1:53am
I love how greenlight is still up. There's at least two threads I know of that are still somewhat active

FatedSpaceAcorn Jan 16 @ 5:02pm
It is weird that this comment section still exists, but man am I glad I voted for this to be greenlit back then.

Steveskeleton Dec 30, 2016 @ 12:45am
you can play the beta/demo from 2013 for free at www.superhotgame.com , but you will need the unity webplayer, but i forgot where i got it so you will need to do a bit of googling.

SUPERHOT has been Greenlit and is now listed in the Steam store. For the latest information, purchase options, and discussions for SUPERHOT, please see it on the Steam Store or in the Steam Community.
Visit Store Page
For more details Visit Community Hub
For latest discussions
If you really, really want to, you can continue to the Greenlight page. Information on this page may be out of date, since all the action has moved to the areas noted above.