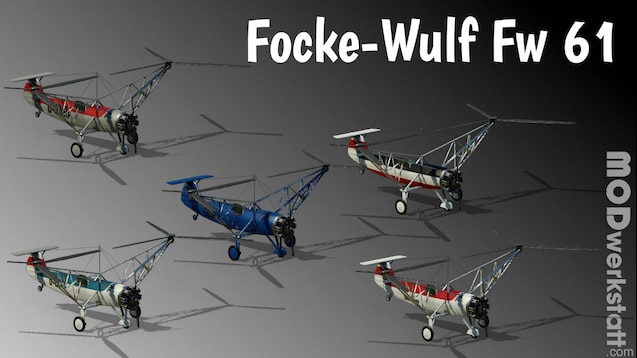 Bandion
Offline
See all 36 collections (some may be hidden)

This item has been added to your Subscriptions. Some games will require you to relaunch them before the item will be downloaded.
Description
The Focke-Wulf Fw 61 is often considered the first practical, functional helicopter, first flown in 1936. It was also known as the Fa 61, as Focke began a new company—Focke-Achgelis—after development had begun.

Professor Henrich Focke, through his development of the Fw 186, and through his work on the C.19 and licence-built C.30 autogyros, came to the conclusion that the limitations of autogyros could be eliminated only by an aircraft capable of vertical flight, the helicopter. He and engineer Gerd Achgelis started the design for this helicopter in 1932. A free-flying model, built in 1934 and propelled by a small two-stroke engine, brought the promise of success. Today, the model can be seen in the Deutsches Museum in Munich.

On 9 February 1935, Focke received an order for the building of a prototype, which was designated the Fw 61; Focke referred to it as the F 61. Roluf Lucht of the technical office of the RLM extended the order for a second aircraft on 19 December 1935. The airframe was based on that of a well-tried training aircraft, the Focke-Wulf Fw 44 Stieglitz.

Using rotor technology licensed from the Cierva Autogiro Company, a single radial engine drove twin rotors, set on tubular steel outriggers to the left and right of the fuselage.[2] Each main rotor consisted of three articulated and tapered blades, driven by the engine through gears and shafts. Longitudinal and directional control was achieved using cyclic pitch and asymmetric rotor lift.[3] The counter-rotation of the two rotors solved the problem of torque-reaction as also shown by Louis Bréguet. The small horizontal-axis propeller directly driven by the engine was purely to provide the necessary airflow to cool the engine during low speed or hovering flight and provided negligible forward thrust.

Only two aircraft were produced.[1] The first prototype, the V 1 D-EBVU, had its first free flight on 26 June 1936 with Ewald Rohlfs at the controls. By early 1937, the second prototype, V 2 D-EKRA, was completed and flown for its first flight. On 10 May 1937, it accomplished its first autorotation landing with the engine turned off.

Focke-Achgelis began work on a two-seat sports version of the Fw 61, the Fa 224, which would have used an Argus As 10C engine and had greater performance. However, the Fa 224 never left the drawing board at the outbreak of WW2.

Bandion  [author] Aug 4, 2019 @ 8:25am
Well its general aviation ^^
I build the planes for "Schönbau" (there is no good translation. Maybe "nice landscaping").
I realy would love it if there would be private planes for TPF. Like AI traffic. That would be the role for my planes. But it is how it is :/ Maybe i build a cessna caravan or citation for more passangers in future. Also a Junkers G33 would be a good option in my opinion.

REXGOLD31 Aug 4, 2019 @ 3:19am
Bandion: The best airplane I've ever liked from your collection! This Is Focke Wolf 61! Just do with a large passenger compartment. At least for 10 people!

Bandion  [author] Jul 14, 2019 @ 10:07am
I think only a Ospray is an possible idea. If the planes wouldnt Pitch the nose up while takeoff i could modell any helicopter with gear as its possible to taxi in reality with them. So there will be not many possibilitys at the moment :/

REXGOLD31 Jul 14, 2019 @ 9:49am
Bandion I liked your helicopter mod! It is a pity that the cabin is open and the number of passengers 1! Could you make a more spacious helicopter! Let it take off a bit like a plane! In reality, so the helicopters take off. This is when there are no runways. They sit down and take off vertically!

REXGOLD31 Jun 24, 2019 @ 8:30am
Bandion Good day! I liked your helicopter! Only now I want to ask why? passengers 1 and not 10 at least! Give a helicopter could be made at least MI-8 Soviet-built! or any other larger passenger helicopter! USA Germany France!
< >