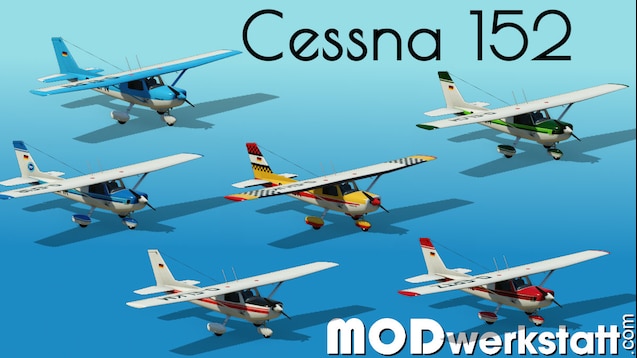 Bandion
Offline
See all 78 collections (some may be hidden)

This item has been added to your Subscriptions. Some games will require you to relaunch them before the item will be downloaded.
Description
The Cessna 150 is a two-seat tricycle gear general aviation airplane that was designed for flight training, touring and personal use.

First delivered in 1977 as the 1978 model year, the 152 was a modernization of the proven Cessna 150 design. The 152 was intended to compete with the new Beechcraft Skipper and Piper Tomahawk, both of which were introduced the same year. Additional design goals were to improve useful load through a gross weight increase to 1670 lbs (757 kg), decrease internal and external noise levels and run better on the then newly introduced 100LL fuel.

As with the 150, the great majority of 152s were built at the Cessna factory in Wichita, Kansas. A number of aircraft were also built by Reims Aviation of France and given the designation F152/FA152.

Production of the 152 was ended in 1985 when Cessna ended production of all of their light aircraft; by that time, a total of 7,584 examples of the 152, including A152 and FA152 Aerobat aerobatic variants, had been built worldwide.

In 2007 Cessna announced that it would build a light sport successor, designated the Model 162 Skycatcher, although production ended in 2013.

Bandion  [author] Jun 28, 2019 @ 1:28pm
@DIY Miracle Its easy to edit. Most Mods use a avial.. to and from. That can easy be editet in the .mdl of the mod. So just enter the modfolder_1 > res > models > vehicle > plane . In the last Folder named plane you can find every .mdl of the cessna. Open it with a texteditor and scroll to the end. You find there these settings:

If you change the "year To = 0" then the plane is availible alltime.
Otherwise i can make the Edit für you at the Modwerkstatt. then you only need to install the mod manually.

DIY Miracle Jun 28, 2019 @ 7:14am
Could you get rid of the ending availibility date? I want this as a late game means to assess small passenger capacity route viabillity.