Store Page
Transport Fever>  Workshop > Werkstatt's Workshop
This item has been removed from the community because it violates Steam Community & Content Guidelines. It is only visible to you. If you believe your item has been removed by mistake, please contact Steam Support.
This item is incompatible with Transport Fever. Please see the instructions page for reasons why this item might not work within Transport Fever.
Current visibility: Hidden
This item will only be visible to you, admins, and anyone marked as a creator.
Current visibility: Friends-only
This item will only be visible in searches to you, your friends, and admins. 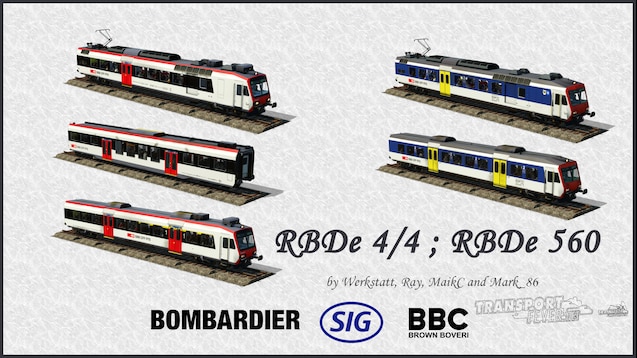 Werkstatt
Offline
See all 71 collections (some may be hidden)

This item has been added to your Subscriptions. Some games will require you to relaunch them before the item will be downloaded.
Description
Developed in the early 80's of the last century, are the back then 'NPZ' called
trains on the move until today. They were built in severals series from
1983 to 1997 of the swiss industry. The first 4 were prototypes and were shown in various liveries. The decision was made
to the design called 'kolibri', which is contained in this pakage.

They are used since ever in the local passenger services. From 2008 to 2013, they were subjected to a big revision.
After the half of the lifecycle, a big revision is essential. The climates, interior, big parts of the technique and the
paint were replaced. The trains are now ready for services until in 20 years.
As an addition, Bombardier Transportation has built some new passenger cars, they were called INOVA. As a result of the technical alignment, all rototypes were sold ore scrapped.

As standard, there are only a few variations aviable. The rest could be set active with the TPFMM or directly in the settings.lua.
Warning: the purchase menu will be flooded!

Disclaimer:
Please take consultation with me and the original developer if you want to do some repaints.
I take no liability for damage on hard or software. The mod survived an extensive testing phase without any problems.

Maering Jun 25, 2019 @ 9:47am
Thank you very much for porting/remodeling this train to/for Transport Fever.