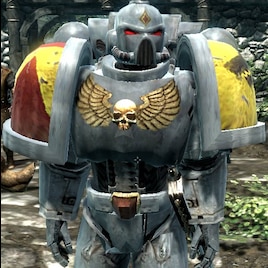 TheycallmeQ
Offline
See all 318 collections (some may be hidden)

This item has been added to your Subscriptions. Some games will require you to relaunch them before the item will be downloaded.
Description
40k in Skyrim - Space Marine Armor (WIP)

(The first two of many chapter and specialist oriented options. Space Wolves benefit from the Canis Helix, & Grey Knights have psychic abilities

(Videos are of OLD versions)

Like the new look? - reschu0 has been working hard to create vastly improved versions of the Black Templars, Blood Angels, Blood Ravens, Dark Angels, Deathwatch, Salamanders, Soul Drinkers, Space Wolves, and Ultramarines plus the Iron Snakes texture, and more that will be featured soon.


Space Marine playable races added, with abilities for 15 of the 19 Implants - FOR TESTING ONLY
(1 disabled, 2 are still in progress, 1 has no game-relevant effect)
Neuroglottis (clairvoyence) uses spell effects, but no Magicka, and does not level skill
Custom Occulobe (Nighteye) effects by Tessai that actually portrays what it is like to see better in the dark naturally.
# Other abilities are always on - subject to change and balancing - currently quite OP
Ability details - http://skyrim-40000.wikispaces.com/Implant+Abilities

For best results, delete mod in mod loader, and re-download if you experience any issues. (The mod is quite large, so the potential for an overwrite error is slightly greater than others.)

% Known issues: Races do not have stored face-gen data (if you shift to one mid-game, you will retain your appearance if a human race.)
Modeling errors (armors disappear if dropped, gauntles do not display in inventory unless spun, Armor shows over text) Nothing that hampers 1st or 3rd person use, however it will be corrected.

Acey/Pirate has granted the use of his awesome Dwemer Autoblade, now modified and included (In the Weapon Pack, not here.)

reschu0 has been working hard to create vastly improved versions of the Black Templars, Blood Angels, Blood Ravens, Dark Angels, Deathwatch, Salamanders, Soul Drinkers, Space Wolves, and Ultramarines plus the Iron Snakes texture, and more that will be featured soon.

For even more:
http://forums.bethsoft.com/topic/1343653-creation-kit-video-tutorials-merged/
(This last is a frequently updated repository of quality tutorial videos, like the ones above)

v3.3 - Texture updates for 7 chapters, 2 new Chapters, improved normal maps, Chaos armor moved to separate expansion, new perk to mimic Cushioned so as not to affect the base perk.

v3.2 - Weapon Pack compatibility, Shiny Chaos armor fix, and integration of races with Quest DB09 "To Kill an Empire" (The chef will recognize marines as Imperials)

This web site is completely unofficial and in no way endorsed by Games Workshop Limited and all associated marks, names, races, race insignia, characters, vehicles, locations, units, illustrations and images from the Warhammer 40,000 universe are either ®, TM and/or © Copyright Games Workshop Ltd 2000-2012, variably registered in the UK and other countries around the world. Used without permission. No challenge to their status intended. All Rights Reserved to their respective owners. (<- Official required disclaimer wording for completely UNOFFICIAL mod use)
< >
1,061 Comments

methodhigh Apr 2, 2019 @ 2:35pm
races don't seem to work anymore sadly, i re-installed the mod as it has been some years since i last played skyrim, but neither the commands nor the race menu works

Mr.stealyourlife Jun 10, 2018 @ 12:43am
i should be like what the fuck its not ork gunz or mounts but come on space marines are cool not as much as orks