Store Page
Hearts of Iron IV>  Workshop > lemonporn's Workshop
This item has been removed from the community because it violates Steam Community & Content Guidelines. It is only visible to you. If you believe your item has been removed by mistake, please contact Steam Support.
This item is incompatible with Hearts of Iron IV. Please see the instructions page for reasons why this item might not work within Hearts of Iron IV.
Current visibility: Hidden
This item will only be visible to you, admins, and anyone marked as a creator.
Current visibility: Friends-only
This item will only be visible in searches to you, your friends, and admins. 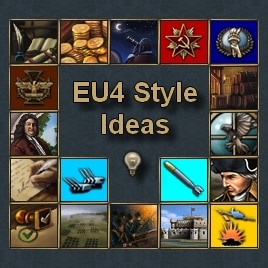 This item has been added to your Subscriptions. Some games will require you to relaunch them before the item will be downloaded.
In 1 collection by lemonporn
EU4 Style Ideas

Features
This mod adds 27 idea groups with 7 ideas each as well as 64 policies that you can buy in exchange for Political Power.

The idea groups are split into 3 categories:

Each idea group has at least 5 policies that requires the idea group itself as well as another idea group to be fully unlocked.

All countries have 8 idea group slots which are unlocked by date, from 1937 to 1944 (or 1911 to 1918 if playing with Hearts of Iron IV: The Great War, or 1008 to 1015 if playing with Equestria at War) one per year. A game rule allows to extend it from being able to take 8 idea groups up to 16, the additional ones are as well unlocked yearly. An idea group can be chosen for each slot allowing to unlock its ideas and thus gaining their specific bonuses.
Furthermore, countries have 7 national ideas, 2 traditions and 1 ambition, which are unlocked by completing ideas. To unlock all national ideas and thus gaining the ambition, at least 21 ideas have to be unlocked.

Compatibility
Localisations
Most of the ideas don't have descriptions yet, but those will be added in later updates.

Other
If you find any bugs or have any suggestions, please let us know in the comments.

Also, feel free to join us on our Discord[discord.gg].
Popular Discussions View All (3)

初雪 6 hours ago
This mod can't be used in ver 1.10.2 beta. Specifically, releasing the idea slot only consumes political power and does not reflect any effect.
Perhaps some of the elements added in ver 1.10.1 will be removed in the next update.

Kürfurst Oct 22 @ 10:36pm
im not that good with moding or manual mod installing

lemonporn  [author] Oct 18 @ 8:41pm
@Kürfurst: Ah, yeah. They added something in 1.10 which seemed better and easier for me to create the tooltips for ideas etc, so I changed it to that. But that won't work with 1.9. You can use the direct download link below tho for the 1.9 version. That should work.

Kürfurst Oct 18 @ 8:38pm
@lemonporn it kinda doesn't work in 1.9.3 version after you updated it. it shows error messages on everything. so i was hoping it to have 1.9.3 version sorry for misunderstanding

lemonporn  [author] Oct 18 @ 12:06pm
@Oberführer Cinnamon: You can download the 1.9 version here (remove the brackets around the dot): http://www.mediafire(.)com/file/d27o58iiy2ouyts/EU4_Style_Ideas_Direct_Download.zip/file

lemonporn  [author] Oct 13 @ 12:42pm
@Pelmen: Hm, I see. I won't make a KR specific version of the mod tho, but someone else could make a sub mod technically, just like the OWB one. But I'll see what I can do with the AI ignoring ideas for X years as a game rule.
< >