Store Page
Don't Starve>  Workshop > pinyaps's Workshop
This item has been removed from the community because it violates Steam Community & Content Guidelines. It is only visible to you. If you believe your item has been removed by mistake, please contact Steam Support.
This item is incompatible with Don't Starve. Please see the instructions page for reasons why this item might not work within Don't Starve.
Current visibility: Hidden
This item will only be visible to you, admins, and anyone marked as a creator.
Current visibility: Friends-only
This item will only be visible in searches to you, your friends, and admins. 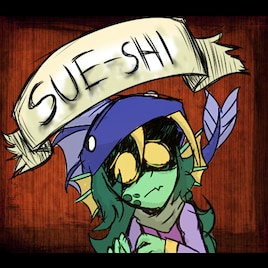 pinyaps
Online
See all 31 collections (some may be hidden)
You need DLC to use this item.

This item has been added to your Subscriptions. Some games will require you to relaunch them before the item will be downloaded.
Description
Adds my character Sue-Shi to Don't Starve.

Compatible with Reign of Giants, Shipwrecked and Hamlet.

Sue-Shi spends a majority of her life underwater in oceans or rivers but that doesn't mean she can't live on land. But why is she in The Constant? Not even she knows.
All she can remember is being brought there under mysterious circumstances.

Has a nice hat
Where she's from, it's tradition to wear the first thing you hunt as a trophy.
-She spawns with her hat in her inventory.
-Costs 1 Fish and 1 Tentacle Spot to craft.
- For Shipwrecked and Hamlet worlds, she can craft her cap using bone shards.
-It spoils after 8 days and gradually gives the wearer wetness which caps at 45%.

Is a fish.
She's a fish.
-Merms ignore her unless provoked.
-Since she thinks she can just "swim" she's pretty bad at making boats so they take more damage from waves and the boats have less HP.

When she reaches a temperature over 55°C she starts to get debuffs.
The debuffs include:
-Slower walking speed.
-Weaker attack.
-Sanity loss.

Big thanks to Neutral/Neu7ral for help with the coding.
< >
48 Comments

EnderPacman Aug 17 @ 12:00pm
ok,Looks great and fits in with don't starve very much!

EnderPacman Aug 16 @ 2:29am
Hey,this mod looks great so far! It looks like a character Klei Would actually add but maybe there could be some reworks. 1:Pig people Attack her,she is a monster character like Webber. 2:She could Swim and Maybe make new tools,weapons and armor for the water to Increase Damage at water. Other than those Idea's,This is a very Balanced character.