Store Page
Europa Universalis IV>  Workshop > Worlds Smuggest Detective's Workshop
This item has been removed from the community because it violates Steam Community & Content Guidelines. It is only visible to you. If you believe your item has been removed by mistake, please contact Steam Support.
This item is incompatible with Europa Universalis IV. Please see the instructions page for reasons why this item might not work within Europa Universalis IV.
Current visibility: Hidden
This item will only be visible to you, admins, and anyone marked as a creator.
Current visibility: Friends-only
This item will only be visible in searches to you, your friends, and admins. 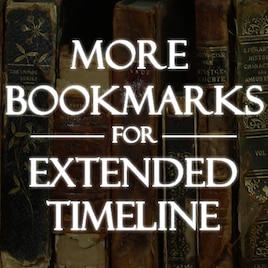 This item has been added to your Subscriptions. Some games will require you to relaunch them before the item will be downloaded.
In 1 collection by Worlds Smuggest Detective
Flavortown Universalis

13 items
Description
This mod adds 37 more bookmarks for the Extended Timeline mod, along with some additional historical wars, events and modifiers that trigger when playing a specific bookmark.

Do you want your start menu to be unnecessarily crowded with bookmarks? Do you like scrolling through a bunch of start dates you'll probably never play? If you answered "yes," then you're in luck.

The intention of this mod is to provide the player with interesting nations that would not be available through the base mod's bookmarks, and for those who don't want to spend the time manually scrolling through the dates in the start menu. (Also because I wasted time making this for myself... might as well share it.)

Certain bookmarks will trigger special wars, truces, alliances, etc. at the start of the game as well. Certain historical modifiers also trigger, but only when starting from a bookmark.

These modifiers are used for historical accuracy and balancing. For example, in the Goguryeo-Sui War, Sui has a modifier that represents their logisticial setbacks, nerfing them for the duration of the war while still posing a great challenge to Goguryeo.

**Note: This must be used with the main Extended Timeline mod. It should be compatible with any other mod, as the bookmarks will still be selectable even if history files are overwritten.

***Also Note: There is a bug (at least I think it's a bug) in which wars in bookmarks sometimes end right when the game starts. I was not able to solve this, so unfortunately some wars will not trigger upon game start, and it is beyond my control.

This mod also serves as a good companion for my other mod, More Missions: Extended Timeline, as many of the mission trees in that mod are for countries not in the base ET's bookmarks:
https://steamcommunity.com/sharedfiles/filedetails/?id=1671760362

Since Extended Timeline covers so many centuries of world history, feel free to recommend any historical bookmarks that you would like to see in the comments.
Popular Discussions View All (1)

Worlds Smuggest Detective  [author] Jun 16 @ 10:50pm
@Rouca I've just updated this mod and a few others, some other ones need a bit more tweaking but they'll be updated soon

Worlds Smuggest Detective  [author] Jun 8 @ 1:59pm
I've actually made Sassanid and Western Roman focus trees (and many more) in my other mod, More Missions: Extended Timeline, if you're interested:
https://steamcommunity.com/sharedfiles/filedetails/?id=1671760362

My Name Is Skinny Penis Jun 6 @ 5:44am
This mod is amazing bro but it would be nice if you gave focus tress for the west and east roman empire sassaind empire and others but you don't have not but keep up the good work.

hierro.matthew Mar 28 @ 6:26am
hey a mistake for the hundred days because its not Napoleon but Emperor Louis XVIII for me ... ; also i have a problem with the french flag who is bicolore (white at the left, blue at the right) with a sort of red bird between ... ?

OogaBooga Feb 19 @ 2:46am
For some reason when extended timeline and this are loaded at the same time it crashes. It happens when I try to click the arrows to set the date numbers