Greenlight > Concepts > HoldenTB's Workshop
Greenlight is being retired. For more information on how to submit games to steam, refer to this blog post.
This item has been removed from the community because it violates Steam Community & Content Guidelines. It is only visible to you. If you believe your item has been removed by mistake, please contact Steam Support.
This item is incompatible with Greenlight. Please see the instructions page for reasons why this item might not work within Greenlight.
Current visibility: Hidden
This item will only be visible to you, admins, and anyone marked as a creator.
Current visibility: Friends-only
This item will only be visible in searches to you, your friends, and admins.
SMS Racing
Description Discussions0 Announcements3 Comments30 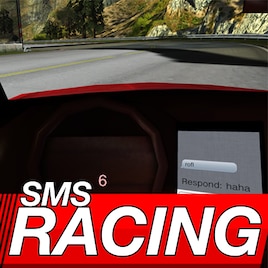 I've been working on a new version of the game, and have a little teaser to share. More coming soon (hopefully with less time between updates)!

Since I posted SMS Racing on Greenlight at the beginning of the weekend, it's risen up to the number three most popular game in the concept category. You guys are awesome! Keep the feedback coming. I'd love to hear more about what you like or don't like about the proposed feature set, and I'll hopefully be able to share a bit more of my work on the game in the coming weeks.

A ton of SMS Racing "Let's Play" videos have popped up on YouTube, and I got a chance to go through some of them to share with you.

NerdCubed's "Free Game Friday"
http://www.youtube.com/watch?feature=player_detailpage&v=Afgz6cwq0jA#t=476
This already has more views than the original viral video. NerdCubed plays through the game and has a lot of laughs.

Dandy DLC's Speedrun (76.52548 sec)
http://www.youtube.com/watch?v=tcVoseM8k9c
Dandy found a way to optimize the game's rules and get fewer texts by not responding to them until the very last second. Pretty awesome speedrun!

Kyoto-Moto's Speedrun (74.634 sec)
http://www.youtube.com/watch?v=BF55sskd8bI
Another really impressive speedrun, beating the previous one by just a notch. This is the fastest time I'm aware of.

LNG Gaming's SMS Racing playthrough
http://www.youtube.com/watch?v=E9uBT4PUOB4
This one is in Chinese, and I'm gleefully ignorant as to what they're saying most of the time, but I can certainly pick out the laughter. Texting and driving is (unfortunately) a universal nuisance, so the language barrier hasn't applied much to its enjoyment.

and last but certainly not least...
Chilled Chaos' Machinima / Gameplay
http://www.youtube.com/watch?v=VEzyRI01EYg
Chilled Chaos' video is absolutely hilarious, and features a well-produced lead-in to the game with machinima from Halo, GTA, and more. They point out a lot of the game jam version's flaws, and I agree with most of them. Hopefully the full version would fix a bunch of the problems!
Read More
Description
SMS Racing is a time trial arcade racer that captures the thrill of texting and driving.

You can play a demo of the game here: {LINK REMOVED}http://holdenlink.com/project/sms-racing/

The current version of the game (as shown in the video, screenshots, and the demo) uses assets from the Unity racing tutorial, which you can get for free from the Unity Asset Store. It's a great demo you can use to prototype something or learn about Unity, but I obviously plan on creating original content to replace it if I take the game through the full Greenlight process.

Proposed Features
I'd aim for it to be some combination of the compulsions of Spaceteam and Mario Kart - fun to play with friends, somewhat unpredictable, and completely absurd. The time trial mode would still exist, and I think it could benefit from the addition of obstacles.

Keeping the Message
One of the things a lot of people like about the game is its obvious message against texting and driving. I love that people are having fun with the game, and think that the message can continue to be present even when focusing more on the game part. I'd evaluate every feature against that goal. Things like a hardcore mode with really unforgiving crashes could be an example of something that potentially fits a niche request and elevates the message.

Notes
Thanks so much for checking out the game!
< >
30 Comments

:^( Jun 28, 2014 @ 10:41pm
This game is actually a great concept, Think of all the possibilitys. Time Trial, Multiplayer, a creative campain kinda challegy thing. do it proud man

Agent Orange Oct 5, 2013 @ 12:13am
Seems like a funny idea. I like how they make it so you kinda are like a teenager (You know, they always text and drive) but your a grown man (or woman) driving on race tracks...

KillaKay Sep 29, 2013 @ 1:49am
This is a really neat idea. If you do the multiplayer, make the text messages the game chat feature.. also could maybe purchase upgrades to different phones (IE Android with Swype) to shave off precious seconds. I will definitely buy this game!
< >