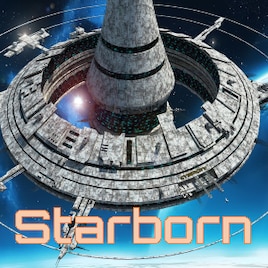 Draconas
Offline
See all 1063 collections (some may be hidden)
You need DLC to use this item.

This item has been added to your Subscriptions. Some games will require you to relaunch them before the item will be downloaded.
Description
Starborn: the Improved Voidtouched Habitat Start (3.4)
The Mod that did Voidtouched before PDX did.

Start on a unique habitat - the Orbital City, built above the ruins of your original homeworld. Build habitats almost anywhere that gain special bonuses and modifiers based on the planet and deposits they are around. Your species adapted to life on habitats now cannot live on planets anymore, not that you care, who needs to search for habitatable planets when all of the void is habitable to you?

Build habitats modulally - as you empire starts and resources are a premium you can start smaller and expand when you can, gaining additional decisions to take habitats to larger than anything the normal races can produce.

Create huge habitats that span solar systems - rather than manage 10 small habitats in 1 system, manage a single habitat that spreads across the available planets in the system.

Origin Features
There are lots of other effects for different types of planets and the different orbital deposits, you'll need to discover them in play or read the spoiler post in discussion

Federations DLC is not required as this is my own work that predates VoidTouched, it has been made voidtouched compatible for ease of playstyles.

Gameplay Notes
Remember that habitats cost alloys in maintenance! You get a small refund on size 4 habitats. It is cheaper to build habitats at max size using the edict menu than it is to build them at small size then scale up with the decision, that is by design.

I do not adjust normal habitats so you will have the ability to build normal habitats, you probably don't want to build them and this addon mod will disable them for starborn empires.

By using the Satellite Complex megastructure it is entirely possible to have a habitat that has too many district types to show on the default UI (with the right system you can easily have mining, energy, trade and research districts). I strongly recommend a UI mod that allows for more districts, I use UI Overhaul Dynamic

Compatibility
This mod makes changes to:

Credit and Thanks
The nature preserve and scavenger districts were inspired by similar ones from Gigastructures.
The building art for come from CGM Planets.
ViolentBeetle on Stellaris Modding Den discord gave me a great deal of help, without which I never would have been able to do the planet and habitat linking

If you would like to help translate into your language, the English language files are at
https://github.com/draconas1/starborn/tree/master/localisation/english if you are familiar with git then feel free to fork and create a pull request when you are done. If you have no idea how to use github the don't worry: download the file, and upload your localised version to pastebin or similar and let me know in the comments and I will handle the rest.

Troubleshooting
The starborn edicts, habitats and bonuses only apply if you take the Starborn Origin. If you take another origin they will be locked to you.

The Satellite habitat complex is available to everyone and unlocks with Tier 3 habitat tech.

Additionally non-starborn players will see 2 new habitat megastrucutre options when they unlock the right tech: advanced habitats and advanced habitat worlds. These are vanilla habitats built directly at size 6 and 8 respectively (and cost the same as if you had upgraded via decisions)
Popular Discussions View All (7)

Draconas  [author] May 30 @ 1:11am
Inny has dropped a new version of merger of rules, so this should now be fixed.

Nova Solarius May 29 @ 12:12pm
Noted. Glad you figured out the issue. I will just not build Relays in my main systems until it's fixed. Not a big loss.

Draconas  [author] May 29 @ 12:10pm
Ok I have looked at the code, it is totally merger of rules. It has a condition "has_any_megastructure = yes" in my placement code.

I will have a chat with inny about why and try to get it fixed.

Draconas  [author] May 29 @ 11:37am
@Nova Solarius that is extremely useful info thank you.

I strongly suspect it is Merger of Rules, as I have had related issues with that before. I will try and investigate further.

Nova Solarius May 28 @ 2:48pm
It says "cannot build due to existing Megastructure" in all systems with a Relay. My play set is as follows:

Draconas  [author] May 28 @ 3:23am
I have dropped a new version with specific compatibility for gigastructures Job Based Megastructure Cap and Tradition Overrides. Full details here: https://steamcommunity.com/workshop/filedetails/discussion/1743133825/1606022547910593658/

Draconas  [author] May 28 @ 2:11am
I managed to get some time to look at these today - I am completely unable to replicate them, either with merc enclaves, or with hyper relays. The habitats build fine in systems with them.

My best theory is that your mod failed to update from the workshop (it's happened before, and the big change I had to make this version is that the "placement_blocks_others" triggers were changed, so if you have an old version that may be causing it), can you try unsubbing and re-subbing and see if that fixes it?

If not can you tell me exactly how you are not able to build them (e.g. does the option to build them not appear at all, does it appear but greyed out, is there a tooltip saying why the game thinks you can't build them when you hover over the topion? Each of these is a separate bit of script code!)

and also what other mods you are running please?

Nova Solarius May 27 @ 5:50pm
The same applies to systems with hyper relays. Unfortunately.

Kanix May 19 @ 2:23pm
I am unable to build a starborn hab / sat complex in a system with an owned merc enclave, can build a regular hab though. Guess this isn't intended?
< >