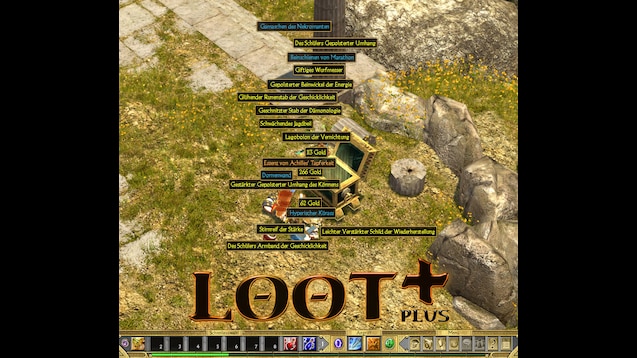 ミメミ
Offline
See all 65 collections (some may be hidden)

This item has been added to your Subscriptions. Some games will require you to relaunch them before the item will be downloaded.
Description
Loot Plus is a bounce mod that aims to make loot more rewarding and farming less tedious. It's made for the current game version 2.8a and affects all acts and difficulties, Ragnarök, and Atlantis. None of the DLC are (should be) required for this mod.


Features of this Mod:
- Increased amount of loot from all containers depending on quality (the better the chest, the more loot it has)
- Roughly quadrupled the chance for epic/legendary items from containers (increased chance and amount means it's about 10x more likely to get an epic/legendary item from bosses)
- More loot volume also means more relics and green items (but not that much)
- Roughly doubled the chance to get formulas from containers
- All Bosses have completely new repeat loot tables
- Normalized the weird distribution of unique throwing weapons (nor more Ladon's Maw by the dozen from bone piles)
- Increased chance to get weapons from boss chests/orbs
- Rectified the discrimination of spears (chance was lower than for other weapons, Typhon and Hydra couldn't drop spears at all)
- Most quest-relevant containers have improved loot tables
- Hades' Treasury now actually contains treasure
- Monster infrequents drop more often
- Some infrequents that couldn't drop before now drop correctly (except for the Jackalman Sling and Polyphemus' Tenderizer, because they break the monster's animation)
- Infrequents have a higher chance to have both a pre- and suffix
- Bosses that equip weapons have a higher chance to wield uniques
- Jewelry quest rewards (almost) always have pre- and suffix and a high chance for rare ones
- Most item quest rewards have a higher chance to be uniques
- A few monster charms (mainly in early game) have a higher drop chance
- The Gambler (Atlantis) uses custom improved loot tables
- Tartarus chests and boss orb will yield a lot more gold (enough to buy a gambler orb with 1-2 boss runs)

It does not change distribution of loot (with one single exception) or the items themselves, you just don't have to farm as much for the good stuff.


HOW BOUNCE MODS WORK:
After subscribing, start the game, select "custom game" in the game menu. Create a new dummy character if you don't have one already, then start the mod (you'll be bounced back to the regular character selection). You will get an "error" message, but this is perfectly normal and just means the game is aware you're using a bounce mod. Select your character and start the game. You'll have to repeat this every time you go back to the main menu.

If you want to use two or more bounce mods together, I've written a Guide on how to merge bounce mods here:
https://steamcommunity.com/sharedfiles/filedetails/?id=1746931699

If you want to use this mod together with Skill Reworks (my other mod), there's a readily merged version in the Skill Reworks download.

For a database-replacer version of the mod (or if you stumbled upon this mod and don't own the game on Steam), follow this link: https://pastebin.com/KyhsHRNZ
Popular Discussions View All (1)

ミメミ  [author] Mar 28 @ 4:38pm
@brabetele
From what I have heard, it does work in multiplayer if both the host and all participating players activate the mod before starting/joining the game.

brabetele Mar 28 @ 3:29pm
it works multiplayer? if yes, how? which are the steps? i am struggling to play with my friend

ミメミ  [author] Mar 28 @ 2:40pm
@Regan
Weird, I never heard of that happening. Did you give it enough time until you reached a boss in epic difficulty? In early epic you will mostly get items from Ragnarök by the way, and it can take some time before the first legendary drops at all.

Regan Mar 28 @ 4:34am
Great mod! Just have one question, It works perfect on normal but for some reason not on Epic :( I have tried switching difficulty for the first load but it doesn't change anything. Am i doing something wrong?

SpiderAUT Mar 22 @ 4:52pm
Mods working perfectly fine for me.
Thank you very much!
My surrounding thanks you as well, now they don't need to hear me cursing around for not getting any useable loot!

ミメミ  [author] Mar 20 @ 3:11am
@Afirlan
Could it be that you accidentally pressed the key to show/filter treasure (tab by default, I think)?

Afirlan Mar 19 @ 8:47am
Hi, I have a real problem here, it was all working fine until suddenly i couldnt see the nametags of the items on the floor, couldn´t pick them up, I tried not running the mod or creating a new charactr and it doesn´t work, it has stayed like that for every character even with the mod unsubscribed... please help!

ミメミ  [author] Mar 8 @ 12:43pm
@Gunther Ultrabolt Novacrunch
Fair enough, I played the game thousands of hours myself before I made the mod, but I wouldn't want to miss it now, as I prefer to play self-found.

Crunchasaurus Rex Mar 7 @ 5:10pm
Thanks. I wouldn't recommend this for anyone starting out as it kinds of cheapens the loot, however as a 1000+ hour player who had given up on finding many items this has come in really handy.