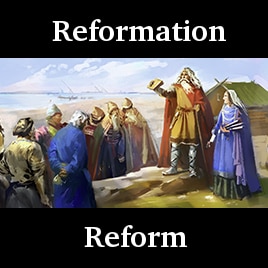 Dragatus
Offline
See all 268 collections created by Dragatus and other people (some may be hidden)
You need DLC to use this item.

This item has been added to your Subscriptions. Some games will require you to relaunch them before the item will be downloaded.
In 1 collection by Dragatus
Dragatus' Pagan Reformation Collection

INTRODUCTION
This started out as a simple balance mod for the various natures and doctrines, but grew over time into an overhaul of the reformation system and a comprehensive rebalance of most of the game's religions. It's not finished, but it's sufficiently developed to release it to the public. If you have any constructive criticism or suggestions you wish to share feel free to do so.

MAIN FEATURES
1) In the new reformation interface natures and doctrines have been merged into a single category called doctrines and you get to pick three of them. Basic features previously determined by nature (such as whether AI characters will convert provinces they own) are now inherent in the reformed religions themselves.
2) Instead of having a unique doctrine pagan faiths now have 1 inherent doctrine that is built into the reformed religion itself and you get it for free when you reform (Sea-Bound for reformed Norse, Ancestor Veneration for reformed Romuva, etc.)
3) Rebalanced existing doctrines and leadership types and added 13 new doctrines and 1 new leadership for a total of 36 doctrines and 5 leadership types to choose from.
4) Reformed pagan religions lose raiding and concubines to make them balanced, but both can be re-enabled with new doctrines. Reformation is intended to allow you to customize the religion to match your needs rather than to be a straight upgrade and unreformed pagan religions should be more viable in the long term. They can now also subjugate non-pagans of lower tier (so an unreformed pagan emperor could subjugate a Catholic king).
5) Added features to bland heresies and rebalanced religions in general.
6) Localized into French, German, and Spanish. I know German so it should be fine, but French and Spanish translation was done with Google translate and is likely pretty bad. If you speak either language and wish to help I would be grateful.

COMPATIBILITY
This mod is not ironman compatible and will not allow you to get achievements.

The mod modifies religions, reformation features, the reformation interface (this includes mods that give you more doctrines), succession laws, voting rules, government forms, societies, and several decisions (from the dynasty, minor, and realm decision files). Any other mod that changes any of these things is almost certainly going to be incompatible. Mods that add entirely new societies should be fine though.

This means the mod is not compatible with HIP, CK2+, AGOT, After the End, or any other major overhaul mod along those lines.

worldmerger Mar 14, 2021 @ 10:12am
Ahh, i had a mod that gave me more reformation slots. I thought i uninstalled said mod but it was still enabled. Thank you again for the speedy responses, and thank you for a great mod.

worldmerger Mar 14, 2021 @ 10:09am
i don't believe so, no overhauls, no other reformation mods. I'm going to do some mod configuration. See if i can identity the problem.

Dragatus  [author] Mar 14, 2021 @ 9:28am
That's strange. I tried reproducing the bug, but everything worked fine on my end. Are you using any other mods that might affect reformation?

Dragatus  [author] Mar 14, 2021 @ 6:37am
I don't see any obvious causes in that screenshot. I'll reinstall the game and look at the files. Are you using the Steam Workshop version of the mod or the manual download? The manual download is outdated.

worldmerger Mar 13, 2021 @ 3:26pm
the first one has a different leadership type, still the same issue occurs. The second one is the desired docs.
< >