Store Page
Ravenfield >  Workshop > Sofa's Workshop
This item has been removed from the community because it violates Steam Community & Content Guidelines. It is only visible to you. If you believe your item has been removed by mistake, please contact Steam Support.
This item is incompatible with Ravenfield. Please see the instructions page for reasons why this item might not work within Ravenfield.
Current visibility: Hidden
This item will only be visible to you, admins, and anyone marked as a creator.
Current visibility: Friends-only
This item will only be visible in searches to you, your friends, and admins. 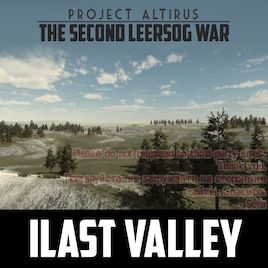 This item has been added to your Subscriptions. Some games will require you to relaunch them before the item will be downloaded.
In 1 collection by Sofa
[DISCONTINUED] Project Altirus

Snowy version of this map can be found here:
https://steamcommunity.com/sharedfiles/filedetails/?id=1739933449

The Kingdom of Hetland is in dire straits. The Royal Family has fled the country. The Central Staff is at each-other's throats. Lines are being drawn even among the men and women of the Home Army, as the front lines are ripped apart by differences in loyalty, personal agendas, or a desire to just go home and let the nightmare end. However, Hetland's fate may hinge upon one factor: The merging of Syrvania's northern and southern fronts. Despite taking heavy losses through Radetziy Pass, Syrvanian armored units are preparing to surge south toward Tába, breaking out from the highlands. Though the Ilast Valley region is not well fortified, it may prove to be the stage for a decisive spoiling attack by Hetland's own armored forces. Though victory here may not save Hetland from defeat, it may just serve to reunite her fractured armies in the King's absence.

This map has been released to preview and debut updates to Project Altirus vehicles. These include using new features in the vehicle scripts, more detailed models (without going too high-poly), and assorted new visual effects such as tracks, muzzle flashes, and animations. All this stuff will be added to the vehicles in the standalone packs and previous maps when any technical issues or balance problems have been resolved in this map.

Катюша Aug 6 @ 4:34pm
this map is actually really fun when using ww1-ww2 era light machine guns such as the bren, the lewis gun, the chauchat, and the BAR

Crome Jun 26 @ 9:28am
defunct or not, still the best tank/trench battle map on the workshop

Kon Apr 16 @ 5:28pm
I know this is defunct and totally respect that. But I would like to inform you that the Syrvanian tank destroyer now sends you to outer space when fired. But it gave me nostalgia for old ravenfield atv's so whatever

deadshot20044 Sep 2, 2019 @ 10:28am
,,If you're reading this,it means my leave time was shortened like the rest of the guys and got sent to this...this hell once again. I don't expect to be here for long,though,everyone pretty much knows that the war will soon be over for us Hetlanders. Our situation here isn't any better than other fronts,low supplies,demoratised troops from young to old,paranoid offcers and worst of all,the fear of being attacked my Syrvania,of course. Some of us even killed ourselves to escape all of this. I always hoped that this will be the war to end all wars,but I highly doubt it. Most of us are just asking for a small non-lethal wound,hoping it will finally put us on a train back home,away from this....we had enough. If I don't make it back,my sweat Antolia,know that I did everything I could to do it. Your dear husband,Karl from the 262nd Rifle Regiment,Hetland Home Army,Ilast Valley.

FredTheFlipin'PufferFish Aug 18, 2019 @ 5:54pm
Why are there no vehicles? Are you supposed to use the config?

conanmonan91 Aug 11, 2019 @ 10:14am
you can by going into volume manager by holding the volume button on the bottom of your desktop. Make sure the bird sound is playing when you do it so it appears. works for windows
< >