Store Page
Garry's Mod>  Workshop > Kryptonite's Workshop
This item has been removed from the community because it violates Steam Community & Content Guidelines. It is only visible to you. If you believe your item has been removed by mistake, please contact Steam Support.
This item is incompatible with Garry's Mod. Please see the instructions page for reasons why this item might not work within Garry's Mod.
Current visibility: Hidden
This item will only be visible to you, admins, and anyone marked as a creator.
Current visibility: Friends-only
This item will only be visible in searches to you, your friends, and admins. 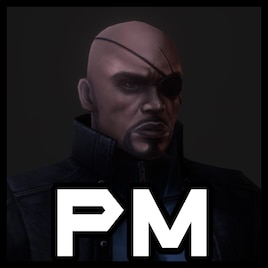 This item has been added to your Subscriptions. Some games will require you to relaunch them before the item will be downloaded.
In 1 collection by Kryptonite
Kryptonite's Published Models

86 items
Description
"Nicholas "Nick" Joseph Fury is a former Colonel who had served with the United States Army and an espionage veteran of the CIA during the Cold War. Continuing to serve the world, Fury joined S.H.I.E.L.D., a covert international peacekeeping organization which operates as humanity's first line of defense against Earth's most dangerous enemies.Later promoted to Director of S.H.I.E.L.D., Fury refocused his efforts to organize the Avengers Initiative, which had been named after Danvers' own former codename, with Fury's true intentions being to bring together any other super-powered individuals assist S.H.I.E.L.D. with protecting the Earth from extraterrestrial threats, which he had only learned of following his encounters with the Kree and Skrulls. Despite some more considerable reluctance from World Security Council who had not believed in his theories, Fury had still continued his efforts and eventually managed to recruit both Iron Man and Captain America into their Initiative, ready for an incoming invasion."

All rights reserved to Disney, Marvel.