Store Page
Garry's Mod>  Workshop > ϟLightning Boltϟ's Workshop
This item has been removed from the community because it violates Steam Community & Content Guidelines. It is only visible to you. If you believe your item has been removed by mistake, please contact Steam Support.
This item is incompatible with Garry's Mod. Please see the instructions page for reasons why this item might not work within Garry's Mod.
Current visibility: Hidden
This item will only be visible to you, admins, and anyone marked as a creator.
Current visibility: Friends-only
This item will only be visible in searches to you, your friends, and admins. 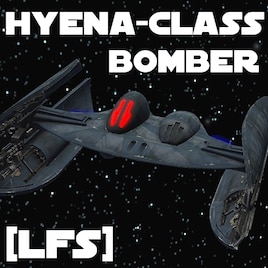 See all 4588 collections (some may be hidden)

This item has been added to your Subscriptions. Some games will require you to relaunch them before the item will be downloaded.
Description
"Send the Hyena Bombers... That should draw those cowards out..."
The Separatists have now begun to produce Hyena Bombers to draw out those Republic cowards, and to keep them on alert... Either take part as an escort for these Hyena Bombers, or become the Hyena Bomber and wipe out your designated targets.

Gordon Freeman The Annoyance Mar 21 @ 10:19pm
but what happens if the clones get to the droid first and pilot it?

fellout man Jun 10, 2019 @ 1:14pm
Hello Talented Creator (Lighting Bolt) If You Can Could You Make War Of Rights Models?Im Asking This Because Theirs No Good Civil War Models On This Damn Workshop,And Also Because The Civil War Models Have Beards, Moustaches Ect And Also Because Of The Patches,Flags,Uniforms,Hats,And Everything About Them So Please Could You Make War Of Rights Models It Would Be So Good For Scenebuilding For You Guys And Us.