Greenlight > Games > DigitalDNA Games's Workshop
Greenlight is being retired. For more information on how to submit games to steam, refer to this blog post.
This item has been removed from the community because it violates Steam Community & Content Guidelines. It is only visible to you. If you believe your item has been removed by mistake, please contact Steam Support.
This item is incompatible with Greenlight. Please see the instructions page for reasons why this item might not work within Greenlight.
Current visibility: Hidden
This item will only be visible to you, admins, and anyone marked as a creator.
Current visibility: Friends-only
This item will only be visible in searches to you, your friends, and admins.
CastleMiner Z
Description Discussions72 Announcements18 Comments2158 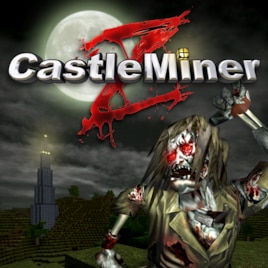 DigitalDNA Games
Offline
See all 265 collections (some may be hidden)

View CastleMiner Z in the store

Thank you everyone for getting us there.

Okay I am finally able to confirm it. If you bought the game on our website you will get a steam key.

Note.. This only applies to people that actually purchased the game. Not got it free though a promotion.

CastleMiner Z is an online coop survival horror game in a block based environment. Travel with your friends in a infinite spanning and ever-changing world while defending yourself from the zombie horde. Mine the world for resources, to craft the weapons that you will need to survive.

Try it yourself right now!
You can play the beta of CastleMiner Z right now on the PC here.

You can also play the Xbox version of the game by getting it here.

Features
The game has gotten Greenlit!! Thank you Steam community, we are excited to bring you this game!

Thank you for your support.

THE-LAST-SAINT Mar 31, 2015 @ 10:07am
my opinion about this game: i like the idea! looks nice but it's not orginal!! it's simply based off other people's idear's and copyed to be able to use gun's in it! i own a copy of minecraft you can mod that to have weapons like gun's even tanks and planes now!! so why bother getting this. if you people left out the bits like copying the dragen and the skaletons and suqare blocks! it would not be a copy! nuf said,

CastleMiner Z has been Greenlit and is now listed in the Steam store. For the latest information, purchase options, and discussions for CastleMiner Z, please see it on the Steam Store or in the Steam Community.
Visit Store Page
For more details Visit Community Hub
For latest discussions
If you really, really want to, you can continue to the Greenlight page. Information on this page may be out of date, since all the action has moved to the areas noted above.