Store Page
RimWorld>  Workshop > SineSwiper's Workshop
This item has been removed from the community because it violates Steam Community & Content Guidelines. It is only visible to you. If you believe your item has been removed by mistake, please contact Steam Support.
This item is incompatible with RimWorld. Please see the instructions page for reasons why this item might not work within RimWorld.
Current visibility: Hidden
This item will only be visible to you, admins, and anyone marked as a creator.
Current visibility: Friends-only
This item will only be visible in searches to you, your friends, and admins. 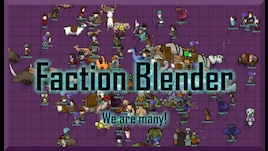 SineSwiper
Offline
See all 2378 collections (some may be hidden)

This item has been added to your Subscriptions. Some games will require you to relaunch them before the item will be downloaded.
Description
About
Are you annoyed that you downloaded all of these different races and animal mods, but they come with some boring homogeneous faction to show them off? Wouldn't it be more realistic if there were a faction that brought these races together?

Faction Blender fixes this problem by introducing a new faction that takes in refugees and wanderers from all races and walks of life to form a civil coalition!

Hobbits, Dwarves, and Elves from Lord of the Rim? Check. Elder Things? Check. Asari from RimEffect? Got them. Federation soldiers and their creations? GlitterTech commandos? Tanks? Dinosaurs? Mechanoids? Genetic Rim monstrosities? Eldritch horrors? Some race mod you just created? Yep, all of them.

Just have vanilla pawns in your game? Now you have a faction with outlanders, tribals, mechanoids, and thrumbos.

Pirates aren't left out, either. An amalgam pirate band will come stomping with their own unified gang of pawns to terrorize your town, too.

Features
Got a question or issue? Read the wonderful FAQ![github.com]
Other Resources
Popular Discussions View All (13)

Papa Wraith 11 hours ago
so i added a copied error report for a trader issue, the trader is from ratkin+ the faction is from blender, can't add info in the report now as its pending review ? hop e you see this, if there anything there in the report you see that i can change fix that be awesome , thank you!

OLDPancakes 22 hours ago
Conflict with MOD: multiplayer
Exception Description: unable to trade at other sites

UntouchedWagons Nov 15 @ 9:03am
Can we get a blended tribal faction?

TurtleShroom Oct 23 @ 2:31pm
There exists a Mod that adds a Xeno-Diversity Precept, which determines how much a Faction values creatures unlike its founding Faction Species (so, say, a Human Faction with Onis in its membership).

If you have time, please consider making a Patch for each of your Factions, using the FORBIDPRECEPTS command, that forces the Faction to ALWAYS employ the Exalted Xeno-Diversity Precept. This is done by forbidding every Precept in that category except the highest one.

megabot Oct 5 @ 7:13am
hey umm, could it by chance be done that faction bases do not spawn with manneable turrets? because the enemy pawns do not use them to be honest

SetArk <Nyanverick 07> Oct 4 @ 12:04pm
I love the concept, and love the factions it introduce.
But, the apparent lack of support for dozens and dozens of bugs and incompatibilities ppl reporting, will have to put it back into the freezer until the author have free time to take a look on the problems.
Great mod! Hope in the future the issues ppl have been bringing up can be cleaned, or if the author can't\don't want to keep updating the mod, they may be able to pass it on to another team.
Till them, see yah folks later!
And for those using RimWar, saddly, this mod F* up RimWar map generated unities a lot and you won't be able to assault traders or settlers some(most) times.

tylwythtegs Sep 18 @ 7:10pm
Have had some strange issues with caravans since subscribing; one caravan helped themselves to meals out of my fridge, another caravan did not release the goods when I traded with them (ie. they took my silver but kept the stuff). Not looking for a solution but thought it might interest.

TurtleShroom Sep 17 @ 8:08am
Good news! I tested the Mod and found that all the problems with Factions besides yours not spawning has been FIXED! Thank you so much!
< >