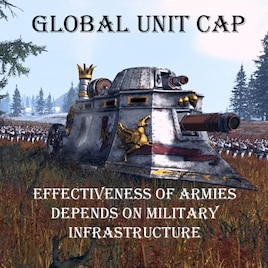 This item has been added to your Subscriptions. Some games will require you to relaunch them before the item will be downloaded.
In 1 collection by Jadawin
List of mods I use in my campaigns - rebalanced & more challenging

30 items
Description
Adds a global unit cap for the player faction. It does not limit any specific unit type, instead there is a global cap to how many total units you can have. The limit is raised by building more military recruitment buildings in your regions. Having more units in your armies than your military infrastructure can effectively support is possible, but will cause increasingly severe penalties. Having better infrastructure than required will provide extra benefits to your armies.

The goal is to encourage the player to use all or most provinces for recruitment and army support, instead of having only one or two recruitment provinces and using all other regions just to increase income, which is the optimal strategy in the vanilla game.

To play with a higher or lower starting amount of free units, or change how many points a buildings adds, you need the Mod Configuration Tool: Reborn (MCT2)
https://steamcommunity.com/workshop/filedetails/?id=2136347705

AI factions are not affected by this mod. The AI does not build a sufficient number of recruitment buildings, and most AI factions will not have enough territory anyway. Also the AI has no idea about the limits and there is no way to teach it, so applying the system to the AI would just totally cripple it. That said, the AI already builds in every province as if it were its only province, so it does not exploit the game the same way the player usually does, by maximizing gold production in most regions. Basically this mod just levels the playing field.


KNOWN ISSUES:
-when playing the Empire, you'll occasionally get an event where an Elector Count is attacked by some spawned enemy force like Norsca or Greenskins, and you have to choose whether or how to help them, with sending a military force being one of the options. This force counts towards your unit count for that turn... and oddly enough, it is created even if you do not actually pick that option! Apparently the game creates the force at the beginning of that turn, and if you don't pick that option, it is destroyed again, but your unit count for that turn was already done by then. So you'll have to live with a penalty for that one turn whenever that event occurs.
< >
123 Comments

Sunset Sarsaparilla Aug 19 @ 1:15pm
@Jadawin
Enjoying this mod so far. The income buildings spam was geting quite dull wihtout it. But while i was playing with this mod and Cost-based army caps, i had an idea. What about another mod, simmilar to this one, but instead of each unit costing 1 point and buldings giving 3, the amount of points the unit costs will be simmilar to how much it costs in MP/Cost-based caps mod, and the millitary buildings generate something like 2000/3000/5000(just an example) per building. So there is "better" synergy with your caps mod and no "bad feelings" when the player have to pay the same cost(in slots) for both trash and luxury unit

Maal Jul 21 @ 2:20am
@Ultramarine
A bit of a month late answer, but that's just for my sfo version. SFO is designed to keep the stronger unit much rarer than in vanilla, so I made their cost scale instead of being the same. Jadawin favor simplity which is perfectly cool, but me linking them to their MP cost was an easy way to make it unit-mod compatible (I use way too many), specially for "trash" expandable unit which usually cost less than 300 so I didn't need to add each one manually to the script.

cybvep Jul 16 @ 4:07pm
I think that Savage Orc Camp building chain (the which Wurrzag gets by default) is not included in the military building list, because it doesn't seem to increase the recruitment cap.

Jadawin  [author] Jun 28 @ 12:33am
I overwrite the tooltip of that UI element. So if the other mod does the same and uses the same element, it is to be expected that they overwrite each other. The location of the element is irrelevant.

cybvep Jun 27 @ 10:38pm
There is a mod called Supply Lines Rework which changes how supply lines work and adds own tooltips during unit recruitment (showing their supply cost) and when mousing over the treasury button panel. The mod even moves the treasury tooltip to a different part of the screen when Global Caps are installed. However, most of the time the newly added tooltips just disappear when using Global Caps as well. This includes recruitment tooltips, even though Global Caps don't touch them. Any idea why? Is there a chance for full compatibility? The mechanics of both mods seem to work fine, it's just about the tooltips.

Jadawin  [author] Jun 20 @ 2:13pm
It was like that in the past, but that just automatically gave the player a huge cap in the mid and late game when all the buildings are upgraded. So instead of making the game harder it just gave free bonuses to recruitment costs.

Reanimator Jun 20 @ 12:53pm
and by def every mil building gives +3 points (lvl 1, upgrading doesnt change) but you can set it up at the start of campaign any way you like - I guess best is between 3 to 5

And @Jadawin, I know we can set this ourselves via mod config but it would be really cool if each building tier/upgrade would grant additional +1 supply, so a lvl 3 barracks a total of 5 supply

dunno just m ysuggestion, maybe at least having an option for taht would be cool?

Jadawin  [author] Jun 20 @ 12:25pm
It's just the count of units, with the only exceptions being Zombies, Skavenslaves and Peasant Mobs which count as half a unit. Otherwise, every unit in the game is one point.