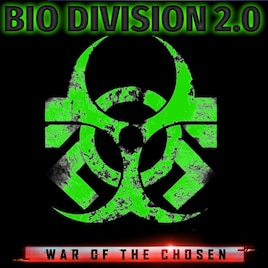 XCOM 2: War of the Chosen - Tactical Legacy Pack
Required items
This item requires all of the following other items
Reward Decks Refresher
Created by

MrShadowCX
Offline
See all 2364 collections created by MrShadowCX and other people (some may be hidden)
You need DLC to use this item.

BIG THANK YOU to Claus and Musashi for the base mod code for the shields.

3.
Q) Do I need the other Bio mods to use this?
A) No, this is an all in one mod and if using this mod, you'll need to unsub to any of the other 4 Bio mods and clean your config before starting a new game.

4.
Q) Clean my config? But why?
A) The older Bio mod files may still linger in your config folder and cause conflicts once you sub to this mod. If you want to use this mod, go to Documents\My Games\XCOM2 War of the Chosen\XComGame\Config
delete the whole config folder. Start your game to the main screen, exit back to desktop and then restart.
you need to start the game twice for it to rebuild a clean config folder.

*1) Bio Captain. Same as in the other past mod, just got a newer updated look.

*2) Bio Trooper. Same as in the other past mod, just got a newer updated look.

*3) Bio Assault Trooper. Same as in the past Bio mod, just got a newer updated look.

*4) Bio Assault Trooper with shield. Updated look and still has the high cover bonus for himself but no longer grants high cover to allies. Now they have a % chance to deflect incoming ranged and melee attacks. Can also use the shield as a melee weapon to bash with.

*5) Bio Rocket Trooper. Same as past Bio mod but has gotten some tweaks in AI to better allow for standing off.

*6) Bio Generals. There were 2 Bio Generals with slightly different helmets and one had an SMG, the other a rifle. One could call in Bio Reinforcements, the other Orbital Gas Strikes. Those 2 are still in but have also gotten upgraded looks. But there are now 2 additional Bio General types. Again, same general look but slightly different helmets. These 2 carry a shotgun and rifle the rifle wielder also has a Bio Rocket Launcher on one arm. They too can call in support and Orbital Gas Strikes. These 4 Generals will still get some added fine tuning over time.

*7) Bio Mec. Has gotten a color update but for the most part has stayed the same. Its spawn weight has been lowered as well.

*8) Bio Faceless. The only unit that has not changed. We like the look and what it does. May get some added love soon though.

*9) BioZerker. Has stayed the same in abilities but has gotten some minor updating to its helmet and Bio Tubes on its back and small skin texture update.

*10) Bio Lost. Yes we went there! There are now 2 types of Bio Lost. Bio Division has taken Lost and put control collars on them. Turned them into "living" bombs. If they get close, they MIGHT set the collar off. Of which their head will explode doing explosive damage to the adjacent tiles around them. the blast radius is not large but will toss acid onto those caught in the blast. The second unit is the Lost Bleeder. Same as the basic Bio Lost but you guessed it... it bleeds acid as it moves. The Bleeder can also howl. Like the Lost Howler in our World War Lost mod, this howl will attract the "other" Lost If on a mission that the Lost are present. However, this howl is also used as a call in for more Bio Lost as well. This could be very dangerous in missions where both Bio Lost and base game Lost are present. These Bio Lost can also be head shot!!

*11) Bio Mec Trooper. The Bio Mec Trooper uses the body of the old XCom EW MecToid. Bio Division has taken it fallen Bio Troops who's brains are still good and the advent control chips in their heads still work, and transplanted the head into a new Bio Mec Trooper. They still contribute even after death, Why waste that battlefield experience right?
The Bio Mec Trooper can be hacked as its a robotic unit. Can not me mind controlled as its encased in its own personal mind shield. Has 3 weapons, a Heavy Tactical Plasma Rifle pf which it can use rapid fire with. A Heavy Tactical Plasma Shotgun. Does the same damage as the rifle but shreds more armor and is a much closes ranged weapon. And a Plasmathrower (Flamethrower). This Flamethrower does damage on contact as the Bio Mec Trooper is discharging built up plasma heat to keep its core cool. This Plasma fueled fire will continue to burn after as well.
It has a decent amount of armor, blast padding and can call in Mec support if it has to.

*12) Bio Viper. Has gotten an updated look and its poison/blind spit has been downgraded to just the poison spit. Still bleeds acid and explodes like an acid bomb if killed.

*13) Elite Bio Viper. A slightly tougher version and more late game. She now has the poison/blind spit and has an upgraded viper rifle that is no longer the beam rifle but now discharges plasma that deals more damage.

SPECIAL NOTES>>> PLEASE READ!!!!!!!!!!!!!!!!
This has been in this mod for some time and I had this info in the original Bio Mod but in my editing of that mods description I failed to add the info back in. IN THIS MOD... Medikits NO LONGER give a magic immunity to poison. You CAN STILL heal poison but the person with the Medikit, no longer has an immunity to poison. You will get that immunity back once and only once you complete the base game Viper Autopsy and gain NanoMedikits. From this point on, Nano and BioMedikits will give the poison immunity. TO balance the base game Medikit no longer giving the poison immunity, I made it so all vipers using the Viper Spit ability can miss with the poison. The Target area will still be covered in poison but not all soldiers in the area will be hit. Some may be but others might be missed.

NEW ADDITION
Bio Division will now have their own Avatar Research Facilities that can show up in the pool of facility missions. There are 3 types. A mixed Bio Facility, where any number of any type of Bio units can show up. A Bio Mec Facility that is 90% Bio Mecs and Bio Mec Troopers with some standard Bio Troopers as facility guards. And Bio Beast Testing Facilities where you guessed it... you'll run into lots of Bio Beasts. Like all facilities, these are tough so you should always plan to bring your A-Team.

4rrakis Jan 23 @ 3:41pm
I can see why you read it that way. To clear it up: This mod is a combination of those four mentioned mods, with some changes to them that are listed under point five.

EX0stasis Jan 23 @ 3:32pm
But the wording implies that those included mods are only what is "new" in the latest update of this mod compilation. How am I do know that there is no other included mods that weren't mentioned? The ones listed there are only the "new" mods that were added.

EX0stasis Jan 23 @ 2:48pm
Sooo... Nowhere in that entire gigantic description does it say what this mod actually is but only what is new.

hamed91211173 Jan 11 @ 3:34am
just a little warning if you install the mod min campaign it's better you not unequip your nanomedikits or you cant equip them again and they not shown in your inventory too
looks like from description and some post happen because of biomedikit that you need to research to have access to your meds again untill then unequip them or use other medicine like Ericpar's HealBomb
https://steamcommunity.com/sharedfiles/filedetails/?id=1440030681

LeanWolf Jan 11 @ 12:46am
The issue with this mod is the "hostile dungeon master" situation, where the spawned creatures have a so much wide array of abilities, are soo op, or their sheer numbers are specifically made so that they can counter anything you try to throw at them, making them more of a grindy JRPG boss than something challenging; add to it the resistances and elemental damage and, well... Xcom players are masochist by nature, but this is too much, great concepts, but completely unbalanced even for lower difficulties. Beautiful mod, I will never play it again.

Serpentax Dec 23, 2021 @ 8:45am
@BowChikaBowWow if you get the choose your aliens mod with MCM, then you go into the config files and into the defaults.ini file, then there will be a section with all of the enemies that this mod adds, and you can disable them from spawning, leaving you with just the medkit and viper changes