Greenlight > Games > Alan Edwardes's Workshop
Greenlight is being retired. For more information on how to submit games to steam, refer to this blog post.
This item has been removed from the community because it violates Steam Community & Content Guidelines. It is only visible to you. If you believe your item has been removed by mistake, please contact Steam Support.
This item is incompatible with Greenlight. Please see the instructions page for reasons why this item might not work within Greenlight.
Current visibility: Hidden
This item will only be visible to you, admins, and anyone marked as a creator.
Current visibility: Friends-only
This item will only be visible in searches to you, your friends, and admins.
Estranged: Act I
Description Discussions8 Announcements4 Comments642 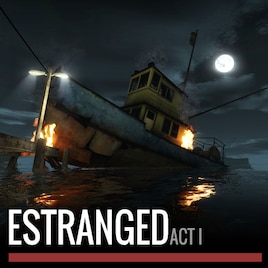 [E] FlashFire
Offline
See all 165 collections (some may be hidden)

View Estranged: Act I in the store

The development of (what would be) the first version of Estranged: Act I started in August 2011, just about two and a half years ago. It has come a long way since then, and I'm excited to announce that it is now complete!

Estranged: Act I will be released on the 16th of this month, with support for Windows, Mac, Linux, Virtual Reality and controllers. It will also include a level editor, with the full sources for all maps in the game.

Thank you for your support, and we hope you can check out Estranged: Act I on the 16th!

About
Estranged tells the story of a lone fisherman, whose ship is stranded on a mysterious island during a violent storm.

Explore the rich environments and meet the curious inhabitants of the island as you find a way back to the mainland. Face both danger and intrigue in this perilous adventure, where you will soon find that not everything is as normal as it seems.

Features
Original Gameplay and Story - The game features around an hour of story driven gameplay. It includes a completely original cast, with a carefully crafted script to bring the Estranged world to life.

Amazing Graphics - Estranged is built on the same engine Half-Life 2 runs, with some additional features. We have extended the dynamic lighting system to allow us to illuminate our levels in a realistic manner, and have included effects such as film grain and lens flare to help create the atmosphere for the game. There is also a feature for higher end systems called Phong, which allows us to show reflections on walls in-game similar to how they would appear in real life.

Original Soundtrack - The soundtrack was written especially for Estranged, and was designed alongside the game's levels. The music matches gameplay, and helps to bring together the atmosphere in Estranged to bring the story to life.

Play
You can play a beta of the game for Windows and Linux right now. Just head over to http://moddb.com/mods/estranged to download.

HBAO and Depth of Field
「﻿ＳＴＹＬＥ」


Have a nice day.

Estranged: Act I has been Greenlit and is now listed in the Steam store. For the latest information, purchase options, and discussions for Estranged: Act I, please see it on the Steam Store or in the Steam Community.
Visit Store Page
For more details Visit Community Hub
For latest discussions
If you really, really want to, you can continue to the Greenlight page. Information on this page may be out of date, since all the action has moved to the areas noted above.