Store Page
Don't Starve>  Workshop > MissSora22's Workshop
This item has been removed from the community because it violates Steam Community & Content Guidelines. It is only visible to you. If you believe your item has been removed by mistake, please contact Steam Support.
This item is incompatible with Don't Starve. Please see the instructions page for reasons why this item might not work within Don't Starve.
Current visibility: Hidden
This item will only be visible to you, admins, and anyone marked as a creator.
Current visibility: Friends-only
This item will only be visible in searches to you, your friends, and admins. 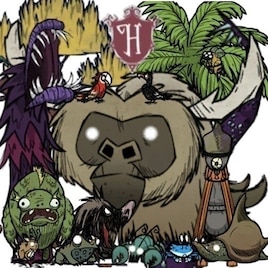 MissSora22
Offline
See all 15 collections created by MissSora22 and other people (some may be hidden)
You need DLC to use this item.

This item has been added to your Subscriptions. Some games will require you to relaunch them before the item will be downloaded.
In 1 collection by MissSora22
MissSora`s Mods

I always found it sad, that so many things from Don't Starve are not available in Shipwrecked and now Hamlet. So I made this little mod to bring some things from the Vanilla Game, RoG and SW to Hamlet. How does it work? Just install the mod and start a new Hamlet World.

This is the first version of the first mod I ever made. So please be aware that it will not be flawless. Also I'm actually quite bad at the game and die fast, so you guys will be my testers for what happens after day 15... I'm hoping for helpful feedback.

WARNING: THIS MOD IS BUILD FOR HAMLET WORLDS ONLY. PLEASE DISABLE IT IF YOU PLAY A VANILLA, ROG OR SW WORLD. THE MOD MIGHT NOT CRASH THE GAME BUT CAN MADE UNDESIRED CHANGES TO THESE WORLDS

First a big thank you to Ultroman from the Klei forum for his help and suggestions.

Here some details about what you will now see (Spoilers):

Thanks to Ultroman the cactus will now bloom in the Humid Season.

Dragonfly is now living on the BFB island.

Bee will now be angry in the lush season.

Jungletrees will now only drop seeds in the lush season.

Rabbit holes and Crab holes are now closed in the Humid Season.

Now you REALLY get most of the recipes from Vanilla, RoG and SW, either like you would in the other Worlds or you can buy them as bluprints in the shops. Aka I fixed my stupid mistake.

Update 1.3.0:
The Economic change has come to Hamlet, new products are now demanded by the pigs and new things are for sale.
But be careful, they will also buy for less and sell for more now.

Now you get most of the recipes from Vanilla, RoG and SW, either like you would in the other Worlds or you can buy them as bluprints in the shops.

Here some details about what you will now see (Spoilers):

The pigs will now buy the following items, too:

The Lily Pond Biome is bigger now and I added options to make it even more bigger so that boats are more important if you enable it.

Sinkhole to the Caves if enabled

If you build a Skyworthy, travel to the Survival World and than down into the caves there, you will come back out in Hamlet.

The Varg cannot call his backup hounds. But I thought better a half Varg experience than none.

And sorry for the English, I'm not a native speaker.

Have fun... and don't starve.
Popular Discussions View All (1)

That would be the best! I love this mod but to be honest, the best exploring experience I had in SW. It would be so awesome to have Hamlet biomes and Treasure hunting on islands along with the new things.

I know it may sound strange but there are 2 mods in DST (although it has the Return of Them update now), one with Shipwrecked and one with also Hamlet things implemented in them.
Could it be possible to ask the authors of those mods to use their mod for resource for your own mod for DS with Hamlet and Shipwrecked?

DaNumberOneHatKid Sep 4, 2019 @ 7:24pm
The Beefalo have returned. Wigifrid is happy. The Hounds have returned. The survivors build stronger bases. The frogs are back. Willow keeps her lighter close.

昆西OvO Jul 27, 2019 @ 3:48am
If possible, could you try to bring ROG and HAM items into the shipwreck? Because I like SW better than HAM

GamingBro23 Jul 15, 2019 @ 5:22am
This mod makes Hamlet 110% better!
Also could you make so that the Crates config can be set to lots. Plz. I like crates.
Crates are the best part about Shipwrecked and this mod.