Store Page
Arma 3>  Workshop > Riggs0's Workshop
This item has been removed from the community because it violates Steam Community & Content Guidelines. It is only visible to you. If you believe your item has been removed by mistake, please contact Steam Support.
This item is incompatible with Arma 3. Please see the instructions page for reasons why this item might not work within Arma 3.
Current visibility: Hidden
This item will only be visible to you, admins, and anyone marked as a creator.
Current visibility: Friends-only
This item will only be visible in searches to you, your friends, and admins. 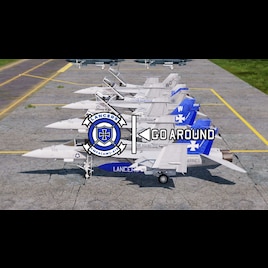 Riggs0
Offline
See all 3 collections (some may be hidden)

This item has been added to your Subscriptions. Some games will require you to relaunch them before the item will be downloaded.
Description
Go Around Studios Presents: VMFA(AW)-212 Lancers
This includes EVERYTHING!

Who are the Lancers and VMFA-212:
Marine Fighter Attack Squadron 212 was activated as Marine Fighting Squadron 212 (VMF-212), the "Hell Hounds", at Marine Corps Air Station Ewa, Hawaii on 1 March 1942. Deploying in May to the South Pacific in their Grumman F4F Wildcats, the squadron was stationed at Tontouta on the island of New Caledonia, and later moved up to the Quoin Hill Airfield on the island of Efate. VMF-212, with no nickname at the time, was one of the first squadrons sent to Far East at the outbreak of the war. They remained in Japan until Marines were able to capture Kimpo Airfield after the Battle of Inchon. The squadron finally touched down in Korea on 18 September 1950 and were flying their first Corsair F4U-5 strikes by 20 September. In April 1965, the squadron, now known as the "Lancers" sailed aboard the USS Oriskany becoming the first Marine jet squadron to be deployed aboard an aircraft carrier in combat. As part of Carrier Air Group 16 (CVW-16) they arrived off the coast of Vietnam and began operating from Yankee Station. In December 1990, the squadron deployed to Bahrain in support of Operation Desert Shield. From there, they flew air interdiction and close air support missions in support of coalition forces during Operation Desert Storm after 17 January 1991. On 13 August 1996 the Lancers took off for the final time from NAS Miramar en route to MCAS Iwakuni, Japan. After a successful six-month cycle the Lancers became a permanent resident of MCAS Iwakuni.The Lancers were the second Marine Corps squadron to deploy after the September 11 attacks, following their aerial refueler aircraft from VMGR-152, the Sumos. The squadron left MCAS Iwakuni on 12 September and after being refueled over Iwo Jima, began flying Combat Air Patrols over Guam in support of Operation Noble Eagle.
Here is where the Marine Corps said goodbye to the Lancers, they were deactivated and are scheduled to become a MV-22B Wing. In my efforts to recreate them, I decided to change them into All Weather Fighter Attack wing so they can fly when every and how ever they would like.

Note:
This includes ALL of the Lancer Utilities.

Want to commission me for other work:
Add me on Steam or Discord(on profile)! or Contact me through my website GoAroundStudios.com