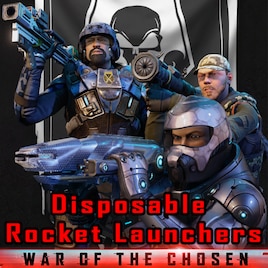 XCOM 2: War of the Chosen
Required items
This item requires all of the following other items
X2WOTCCommunityHighlander v1.22.7
Created by

Iridar
Offline
See all 1315 collections (some may be hidden)
You need DLC to use this item.

This item has been added to your Subscriptions. Some games will require you to relaunch them before the item will be downloaded.
Description
!!! OUTDATED !!!
This mod is outdated. You can still keep using this old version, if you want, it works perfectly fine.

But there is a newer, better version here here:

YOU CAN SWITCH TO THE NEW VERSION MID-CAMPAIGN

FEATURES
This mod adds three tiers of single-shot Disposable Rocket Launchers (DRLs). They offer a heavier alternative to Frag Grenades - they deal more damage and can be used at longer ranges, but they can miss the targeted area and scatter.

Rocket scatter scales with soldier's Aim, and it gets worse if you fire the DRL with only one action remaining.

Safe to add mid-campaign, but I don't recommend doing it during a tactical mission just in case.

You're allowed to carry only one Disposable Rocket Launcher per soldier.

KNOWN ISSUES
Sometimes some soldiers become unable to equip a DRL, showing the error message that the soldier already has a DRL equipped. If that happens, use this console command:
UnequipDisposableLaunchers
For best results, use this command twice in a row. It will unequip DRLs from all soldiers in your campaign. Probably shouldn't use this command while you have someone with a DRL on a Covert Action.

CONFIGURATION
The mod is highly configurable through:

..\steamapps\workshop\content\268500\1723334446\Config\XComDisposableLaunchers.ini
COMPATIBILITY
Should be compatible with almost anything.

CREDITS
The Magnetic and Beam launchers are ported from PlanetSide 2. They are owned by Daybreak Games Company, and will be removed at their request.

Thanks to E3245 for his koalified help with PS2 textures and the authentic AT4 model.
Thanks to NeIVIeSiS for making inventory icons.

Thanks to Beaglerush for his consultations on the mod balance and demo-ing the mod during his XCOM 2 streams, which you can watch here[www.twitch.tv].

Thanks to Pavonis Interactive for their rocket scatter code, and to Favid for bringing it over from LW2 to WOTC.

This mod was made possible by my wonderful supporters on Patreon. The theme of the mod was chosen by them with a vote, and their feedback helped shape the mod.

Please consider supporting me on patreon[www.patreon.com] so I can afford the time to make more awesome mods.
Popular Discussions View All (1)

uberjammer Oct 10 @ 9:59pm
Yes, this is included in Mod Jam, and yes it works with LWOTC. It's in the steam collection "Mod Jam+" as well as listed on the Mod Jam page, but...
...it's confused some people because this mod creates an error when it adds to a steam collection, so it's always listed in notes, rather than on a workshop list.

Iridar  [author] Aug 19 @ 1:42am
@Proxy
Sometimes better is being less overpowered. You can disable that behavior in MCM if you don't like it.

Iridar  [author] Jul 27 @ 1:15am
@RakkoHug~<3
You might need to run the console command mentioned in this mod's description.

RakkoHug~<3 Jul 27 @ 1:10am
Iridar, I am suffering from most profoundly peculiar bug.

Thank you very much

Whisky, Viagra, Paja y Bigotes Apr 29 @ 12:20am
Finally i can take down Sectopods the proper way. No more small arms fire bullshit (After some .ini tweaks)

Iridar  [author] Apr 18 @ 12:55pm
@The LDs
Since you actually bothered to type out a coherent question (as opposed to lazy muppets that just ask "LWOTC?"), I'll give you the courtesy of the answer:

However, Kiruka has a Mod Jam mod project going on that adds various compatibility patches for all kinds of mods for LWOTC, so perhaps you could check that out, see if that mod has a compatibility patch for Disposable Rocket Launchers.