Store Page
Tabletop Simulator >  Workshop > Tuff-Luck's Workshop
This item has been removed from the community because it violates Steam Community & Content Guidelines. It is only visible to you. If you believe your item has been removed by mistake, please contact Steam Support.
This item is incompatible with Tabletop Simulator. Please see the instructions page for reasons why this item might not work within Tabletop Simulator.
Current visibility: Hidden
This item will only be visible to you, admins, and anyone marked as a creator.
Current visibility: Friends-only
This item will only be visible in searches to you, your friends, and admins. 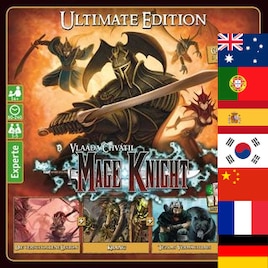 This item has been added to your Subscriptions. Some games will require you to relaunch them before the item will be downloaded.
Description
*This Mod will continue to gain new feature over time. Comment below and let me know what I should be focusing my attention on for the future, or just rate it to show your encouragement*

Mage Knight [wizkidsgames.com]
-----------------
This Mod is made from the Ultimate Edition of Mage Knight, which includes Lost Legion, Shades of Tezla, and the five bonus cards. It also contains the custom mods Atlantean Weather, Quest Cards, Rise of the Forgemaster, and an eighth Mage Knight (Ymirgh). All the scenarios from the rules are working along with seven custom scenarios (First Conquest, Ladyhawke , The Gauntlet, Ultimate Conquest, Fast Forward Conquest, Quest for the Golden Grail, and The Chaos Rift).

My design philosophy was to get you into a game quickly, and let you focus on your game. The scripts will take care of the game's setup for you and do most of the bookkeeping each turn & round. Everything is set up based on which scenario is chosen. With 21 working scenario’s (multiply by the optional variants) I hope there's something for everyone.
-----------------
I have created a front end which allows scenario's to be chosen and variants included. Advanced players, can tweak the scenario's default values also. After selecting two or more Mage Knights (Dummy counts as one of these), the 'Start' button will activate. The script will then go and setup up everything needed for the scenario.

This Mod runs its own smart turn System, managing players through the games stages. It sorts players based on the tactics chosen, and can resort them each round. It recognizes flipped turn markers and changes the turn order to match.

A movable UI in the bottom right gives updating info based on the games current state. It can interpret what is placed on your Play Mat and adjusts the gain values as needed, but you can adjust them with the “+” & “-” buttons if needed.

Play your cards to your play mat to plan out your turn. When you are happy you have done everything, press the “End Turn” button, and it will then clean the play area for you, adjusting the Fame and Reputation Tokens accordingly.

The UI then lists all the end turn things you should consider in the order you should do them. It's dynamic and only list player relevant tasks. Click the button to confirm you have acquired all your rewards, allowing your Mage Knight’s hand to refresh, and control to pass to the next Mage Knight.

The “Call End of Round X of X” button labels what round it is and how many rounds there are. It will remain inactive until a Player or Dummy's deed deck is empty. Calling end of the round will end that Mage Knight’s turn immediately and allow every other Mage Knight to take one last turn.

After the last turn, "End of Round" is processed as per the rules. It's pretty fast, but if you are interested, you can see the list of tasks done in the text box in the lower right. Actually, a lot of the tasks are logged here, in case you missed the on screen prompts.

During the Game, a lot of things are automated, too many to list here. I tried to make things intuitive to use, or work in multiple ways, so I recommend not being shy, and just experiment. If you interact with things as you do in a real game you'll be fine. The undo feature is safe to use as well, as the script data is saved for each undo point.

I would like to thank
Tragic - For his advice when I showed him my work, and his blessing to release it.
Zero-Integral - For his excellent models of the Mages & Volkare

My work is just an extension of the work done by the people who created Tragic's mod. Who knows where one person’s work ends and another's starts, so I will continue to list the thanks given by Tragic - Mr Stump, Lucky7, Raven, Benkyo , Jeronimous, If() and Cryptosha1.

DO NOT offer us money or any other form of gratuity. Just Likes and Favorites will do

Nothing beats playing the real thing. This game is the brain child of design god Vlaada Chvátil and published by the good folk at WizKids Games using amazing art from J.Lonnee. [wizkidsgames.com]
Popular Discussions View All (16)

[Feature request] Notifications about turns being skipped because of battles
Bernaar

How do I switch between competitive and coop modes?
KingInYellow

I have one question: How can i switch the language?

Tuff-Luck  [author] May 30 @ 8:11pm
I've been getting a lot of comments about the mirror source not working as expected, but I just don't see it on my machine. I also watch a lot of videos of people playing and I don't see them having any problems either. Still I ran through the code again and made some optimizations. I can't tell if it helped, but intellectually it is better flowing.

Tuff-Luck  [author] May 22 @ 7:44pm
Damn, so sorry. It’s been ages since the main Ui script has broken that badly. I’m extra surprised rewind time did not help fix the problem. Being a networked game maybe if the host had saved and recreated the server it might have come good. Plus I could get a copy of the save and see what went wrong. I’ll try and replicate what you said, but it often turns out to be some random object in the wrong place causing the problem. Even those are rare occurrences now a days.

HealingAura May 22 @ 12:24pm
A player chose tactic card #2 during the day, placed a card in the discard and returned it before clicking the #2 tactic card button. Then we used rewind and we had so many issues we couldn't complete the game: Menu on the right vanished, all buttons vanished, empty gray rectangle appeared at the enter of the screen. :(

Stelas May 20 @ 7:48pm
Oh, whoops! My bad. I've played the mod enough that turning them off has become second nature, so I didn't even think about it. Thanks for that!

Tuff-Luck  [author] May 19 @ 4:12pm
Ha ha, its already there. Have a read of the help boxes that come up when you start the game. Basically sit at the black seat in the middle of the table. It's the game master seat which can see everyone's hands. I've programmed all the buttons to be locked to the current colour and Black. So multi-hand is totally possible.

Stelas May 19 @ 6:03am
Bit of a feature request: it'd be nice to have the ability to play a solo game with multiple mage knights, one player running both characters. I don't know if this is feasible given the way in which you manage the movement of cards, but I figured I'd mention it because bouncing back and forth between seats is a little bit clunky.

Tuff-Luck  [author] May 17 @ 5:39pm
Sorry, I’ve left no method to increment the turn manually. It’s been pretty robust up till now, so I’d be curious to see a copy of your save game and see how it’s managed to break.
< >