Arma 3>  Workshop > Buzzil's Workshop
This item has been removed from the community because it violates Steam Community & Content Guidelines. It is only visible to you. If you believe your item has been removed by mistake, please contact Steam Support.
This item is incompatible with Arma 3. Please see the instructions page for reasons why this item might not work within Arma 3.
Current visibility: Hidden
This item will only be visible to you, admins, and anyone marked as a creator.
Current visibility: Friends-only
This item will only be visible in searches to you, your friends, and admins. 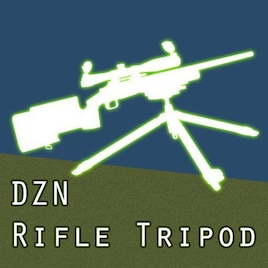 Buzzil
Offline
See all 683 collections (some may be hidden)

This item has been added to your Subscriptions. Some games will require you to relaunch them before the item will be downloaded.
Description
Adds rifle tripod attachement that holds weapon vertically (without tilting) and reduce weapon sway.

Notes:
- Weapon sway effect while on tripod may be set up at ((Settings -> Addon Options -> dzn Rifle Tripod))
- Any bipod items may be leveled using Alt+C keybind when "Enable anti-tilt for all bipods" option enabled
- You can whitelist bipods/weapons with integrated bipod using "Allow anti-tilt for" list option

radicaledward22 Mar 24 @ 10:35pm
is there a way to use de tripod in eden for compsitions?, and another idea, somtiems i use the remote designator as a rifle tripod, maby if you make de tripode a drone or somthing similar you could get tha same function like in ace , thanks for the mod

ACE Feb 23 @ 6:23pm
@Ace it is a rifle attachment like the bipod but much less headache inducing. The ace item is a deployable weapon rest.

@Buzzil Thanks so much for giving the bipods your tripod leveling capability!

Now if only I could find a solution for this horribly narrow field of fire the bipods give when mounted.

Ace Feb 6 @ 9:20am
ACE has something like this already. How does this work compared to the ACE version?

Does this create a turret with your gun bolted to it? Or is it just a surface you can bipod on as the ACE version is?

Buzzil  [author] Jan 15 @ 9:18am
Hi, please check the description on top of this page. There is a piece of code you need to execute to obtain item with different height. But, sadly, it's only decoration, you wan't be able to use it as functional tripod

New-Driver Jan 13 @ 7:20pm
Hello, how can I adjust the length of my tripod?
It's like the guy in the picture sitting with a sniper rifle

Maff Nov 19, 2020 @ 11:14am
Hi, I was wondering if you would be ok with us taking your the three tripod mods and slightly editing them(we wanna make them lighter) then uploading them to a custom unit mod since are also trying to lessen the amount of "Helper" mods by packing them all into 1 main mod? Of course credit would be given.

Buzzil  [author] Sep 22, 2020 @ 4:05am
Something wrong with your CBA_A3 download. Try to repair it (or open CBA's folder, remove all files insside addons folder, and then try to repair it via Arma 3 Launcher)