Store Page
Garry's Mod>  Workshop > Miss Vanilla's Workshop
This item has been removed from the community because it violates Steam Community & Content Guidelines. It is only visible to you. If you believe your item has been removed by mistake, please contact Steam Support.
This item is incompatible with Garry's Mod. Please see the instructions page for reasons why this item might not work within Garry's Mod.
Current visibility: Hidden
This item will only be visible to you, admins, and anyone marked as a creator.
Current visibility: Friends-only
This item will only be visible in searches to you, your friends, and admins. 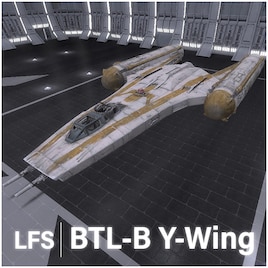 Miss Vanilla
Offline
See all 3928 collections (some may be hidden)

> THIS ADDON REQUIRES THE LFS BASE TO FUNCTION <
> Make sure to support me by rating this addon! <

Info:
" The BTL-B Y-wing was a model of Y-wing starfighter used by the Galactic Republic during the Clone Wars. It was both a starfighter and a bomber, and it was an early predecessor to the BTL-A4 Y-wing assault starfighter/bomber flown by the Alliance to Restore the Republic decades later in the Galactic Civil War. "
- Wookiepedia

Thanks to ahnok
for the suggestion!

Q: I am getting script errors!
A: Please post the error you have in the comments. (Most likely you don't have the LFS base or you have a conflicting addon.)

Other:
Check out my other addons

If you have any suggestions, bugs or opinions, then comment them down below!
< >
60 Comments

Driver May 24 @ 1:01pm
Good to know Vanilla hopefully it will be much easier to fly and not stick to the ground

블랙수박 Dec 22, 2019 @ 12:15am
Even with this manager tool, the cockpit is overlaid, which makes it difficult to distinguish itself from the original model.
Turret is dislocated, not in place, as others have pointed out.
Solving this point, the A-wing will be a little more perfect.
< >