Store Page
Left 4 Dead 2 >  Workshop > Russell's Workshop
This item has been removed from the community because it violates Steam Community & Content Guidelines. It is only visible to you. If you believe your item has been removed by mistake, please contact Steam Support.
This item is incompatible with Left 4 Dead 2. Please see the instructions page for reasons why this item might not work within Left 4 Dead 2.
Current visibility: Hidden
This item will only be visible to you, admins, and anyone marked as a creator.
Current visibility: Friends-only
This item will only be visible in searches to you, your friends, and admins. 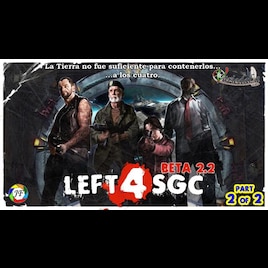 This item has been added to your Subscriptions. Some games will require you to relaunch them before the item will be downloaded.
In 1 collection by Russell
Left 4 SGC Beta v2.2 (Stargate Campaign)


IMPORTANT NOTE: If Left 4 SGC is not getting many updates in recent times, it is because I am concentrating working on expanding and improving the contents of my own game FOTOMUSEO 3D here on Steam.
https://www.youtube.com/watch?v=pfcz7bavLp4

I've been working on this "6 LONG maps campaign" for years. Unfortunately not all the time. Anyway, i hope you like this 2.2 BETA version of the OFFICIAL campaign LEFT 4 SGC.

The campaign story says:
"After THE SACRIFICE of Bil... Zoey, Louis and Francis sailed to make new life on a beatiful island.

But the infection reached there too. After this events, they found an strange and special defibrillator with an strange logo (SGC) and mysterious powers on it. It can revive and restore dead bodies without distinction of the time were dead. And they decided try using it with Bill's corpse. Now, the team is already full again.

Days later; after reach to a secured and abandoned house; they discover one new mission thanks to an annoying guy on a radio. Scape out the infection in another planet using STARGATE named misterious object.

Copyright 2012-TODAY [Variedalia]. This article is not authorized to be copied, modified and/or published on Steam or its Workshop, except under the Steam account with the name Variedalia and its creator Russell.
< >
17 Comments

Russell  [author] Feb 3, 2021 @ 2:16pm
Draeconix, I'm not sure what place are you talking about, but I think is the place of the third LIGHT BRIDGE at the beginning of the 2º map SGC COMMAND with Glados...

You must SHOT the Cristal BOX in front of you with the Companion Cube inside (if you don't have fire weapon, you can use the pistol near the corpse in the ground. After shooting the cristal box, the companion Cube will fall on the button and the third and last Light Bridge will be activated to through it.
< >