Store Page
rFactor 2 >  Workshop > DaREALMastaD's Workshop
This item has been removed from the community because it violates Steam Community & Content Guidelines. It is only visible to you. If you believe your item has been removed by mistake, please contact Steam Support.
This item is incompatible with rFactor 2. Please see the instructions page for reasons why this item might not work within rFactor 2.
Current visibility: Hidden
This item will only be visible to you, admins, and anyone marked as a creator.
Current visibility: Friends-only
This item will only be visible in searches to you, your friends, and admins. 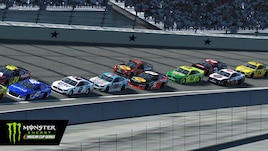 DaREALMastaD
Offline
See all 50 collections (some may be hidden)

This item has been added to your Subscriptions. Some games will require you to relaunch them before the item will be downloaded.
Description
Version 1.04 Updates
- Adjusted region map for Ford's darker appearance so it's no longer as dark
- Adjusted roll cage region map for Toyota and Ford so it doesn't appear chrome like
- Slight tweak to the 550 HP Engine file
- Updated upgrade.ini file so Speedways and Superspeedways configurations use the 550 HP and the Road Course and Short Track configurations use the 750 HP Engine.
- Fixed Dash light so the details are also lite up on Toyota, Ford and Dodge instead of just the RPM gauge
- Added modified ISI window net to fix transparency issue
- Added slightly modified ISI stock car front re-enforcement window bars to fix transparency issue

First thing I would like to say ONCE AGAIN is a major thank you to the original creator Douglas Allen and Cosmin Ioaneșiu for continued modifications. The majority of this conversion from the NR2003 MENCup 2019 is a result from all the efforts of Douglas and Cosmin's great work. I would also like to credit ISI/s397 for their work of the stockcar driver and most of the physics. I take no credit for anything more than being able to have the models in a working condition within rFactor 2 and the digital dash gauge built from scratch. I did not partake in any skin/livery creations in this mod either, if you like or admire the creation of skins/liveries, please thank or reach out to the original creators. If you believe you were not credited in this post or wish to not be a part of this mod, reach out to me and I will promptly remove or edit for proper accreditation. This package will the 1st release with hopefully a few other releases later on to fix any issues that may arise. I also have some items I would like to come back to and improve.

People who helped with progression rF2 MOD:
Can be found at studio-397 forums, thanks for helping when you guys were able to.
bigdaddy24 (Providing Aero package, providing assistance in team creation and .dds conversion, testing and providing feedback)
Machine (Providing tire model from previous implementations) - Thanks and appreciate it.

Feel free to stop over at Splash N Go's facebook to download their latest version of the NR2003 if you also play NR2003 and give them much appreciate as they deserve it. Also as a note, if you wish to use a skins/livery that you have found for the NR2003 MOD from Splash N Go, you just have to convert it to .dds and use it as an alternate skin, car models are fully compatible from the NR2003 MOD for this MOD. The driver models however are not as this MOD uses the rFactor 2 driver model. Leave any comments and I will try to reply as soon/much as I can.
< >
56 Comments

Machine Feb 9 @ 3:09pm
This mod uses a modded version of the 2015 physics from what I understand.