Store Page
NiGHTS into Dreams... > Guides > Virtua Sanus's Guides
This item has been removed from the community because it violates Steam Community & Content Guidelines. It is only visible to you. If you believe your item has been removed by mistake, please contact Steam Support.
This item is incompatible with NiGHTS into Dreams.... Please see the instructions page for reasons why this item might not work within NiGHTS into Dreams....
Current visibility: Hidden
This item will only be visible to you, admins, and anyone marked as a creator.
Current visibility: Friends-only
This item will only be visible in searches to you, your friends, and admins.

NiGHTS into Dreams: Hidden Character Costumes and Special Events Guide
By Virtua Sanus
Learn how to find and easily access all extra date-specific costumes, title screens and easter eggs for the HD version of NiGHTS into Dreams on PC, Xbox 360 and PlayStation 3. All information in this guide is also relevant to the obscure PlayStation 2 version only released in Japan. 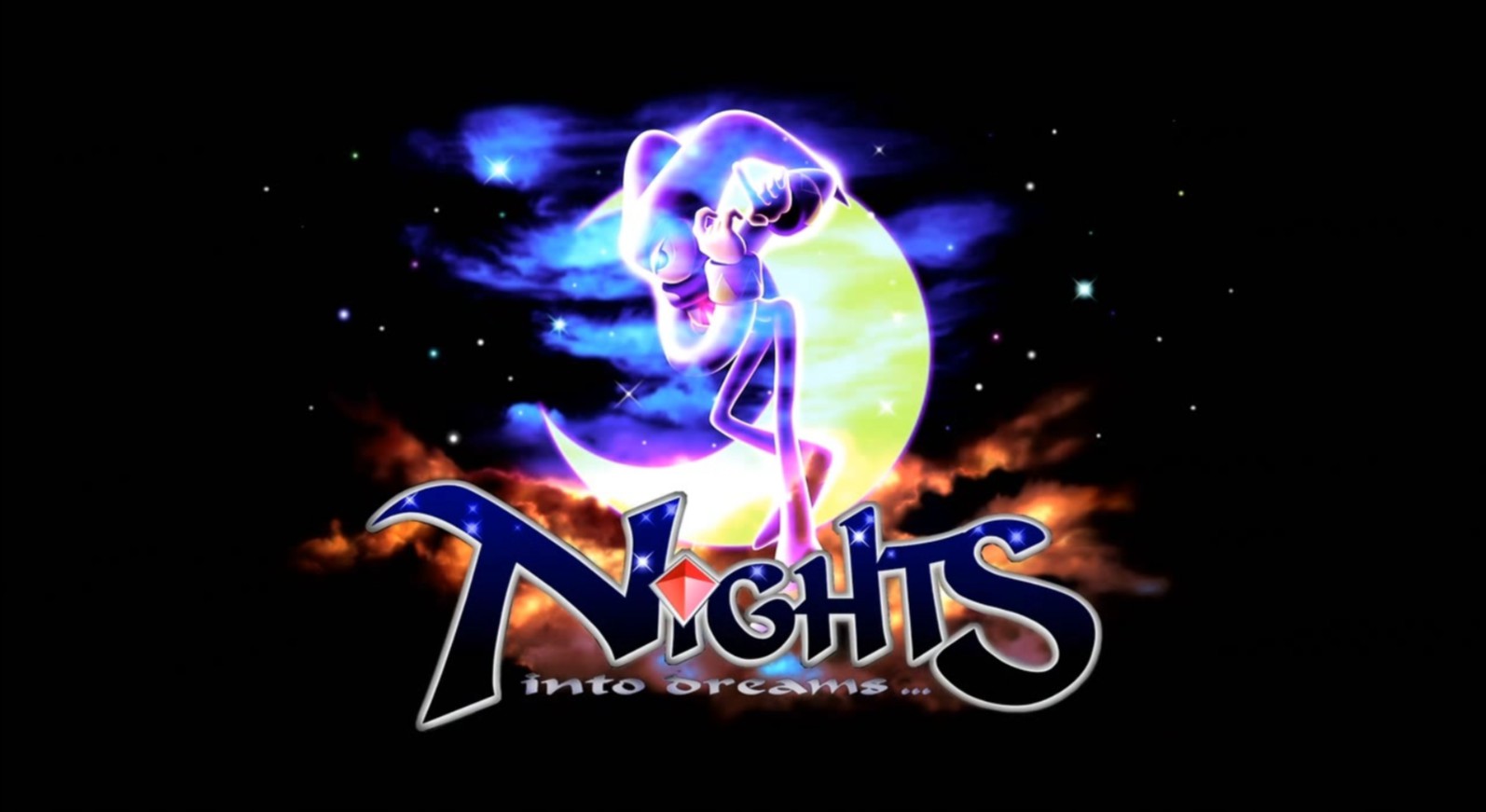 Although NiGHTS into Dreams was never an arcade release, it's strongest values are all designed in a comparable manner. The designers intended that players would keep bettering themselves through continual play, but decided against hiding away the majority of the extra content to those who cannot master the numerous intricacies NiGHTS has to offer. Their expectation was that the player will continue to enjoy the game several months or years after it originally released, just simply because the experience itself is enjoyable, not because they wanted players to master the game.

Below I have included all of the hidden events that occur in the HD release of NiGHTS into Dreams, how to access them, and what is missing from the SEGA Saturn version of Christmas NiGHTS. The A-Life system for raising Pians and altering the game's soundtrack will not be detailed in this guide.

Important: None of these easter eggs are accessible through SEGA Saturn Dreams mode. Anything in Christmas Dreams mode requires that the base game is completed first. Ranks, times and scores do not matter.
Date-Specific Character Costumes and Events
January 1st

If the computer's internal clock is set to New Years Day till the end of January the title screen will be filled with a completely new layout for the background, a new pose for NiGHTS, text welcoming in the new year, and music that is not typically there. 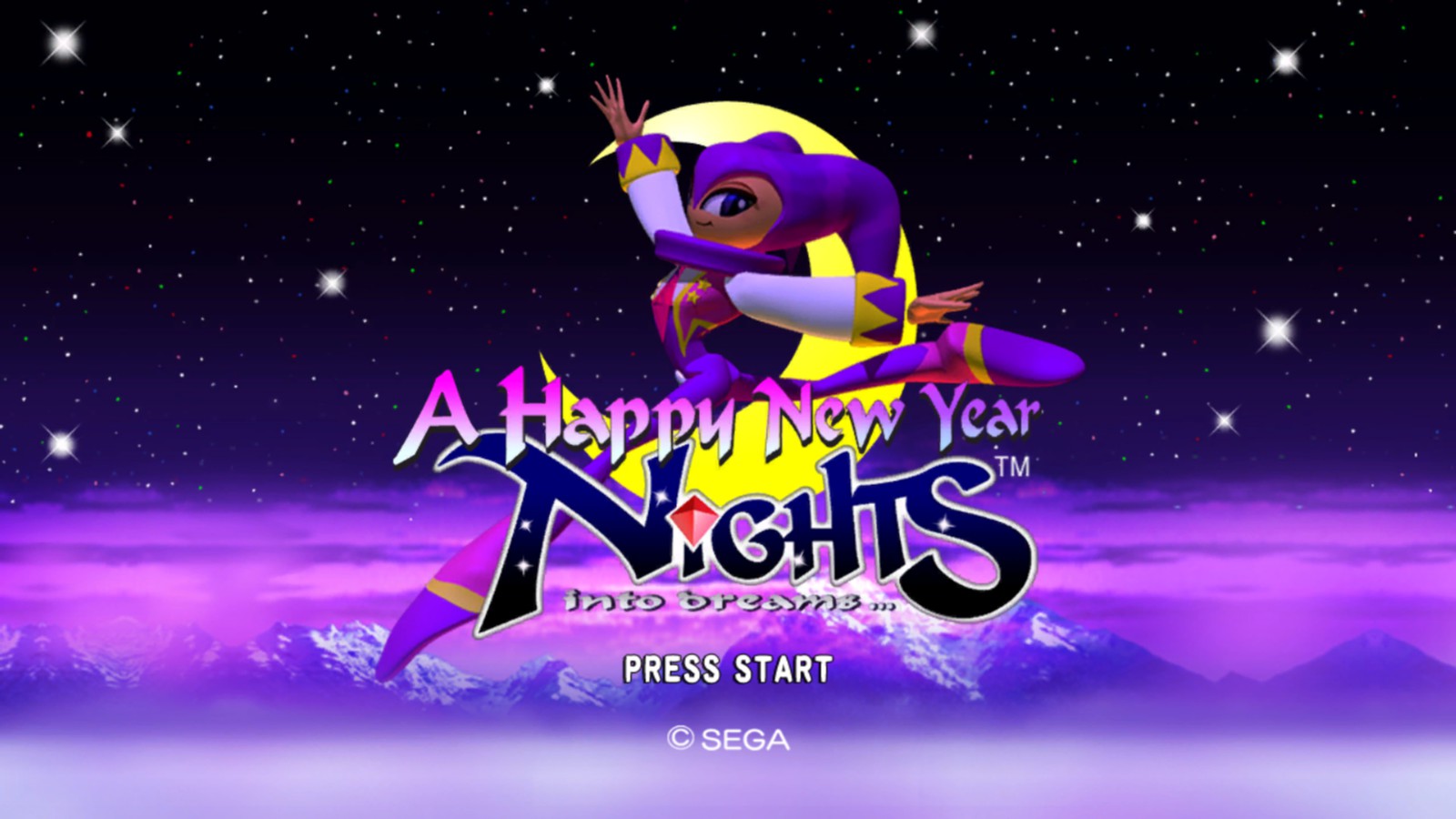 Selecting either level in Christmas Dreams mode from the main menu during January will change the costumes of both Elliot Edwards and Claris Sinclair into somewhat party-themed attire from their typical Santa Claus-themed outfits. 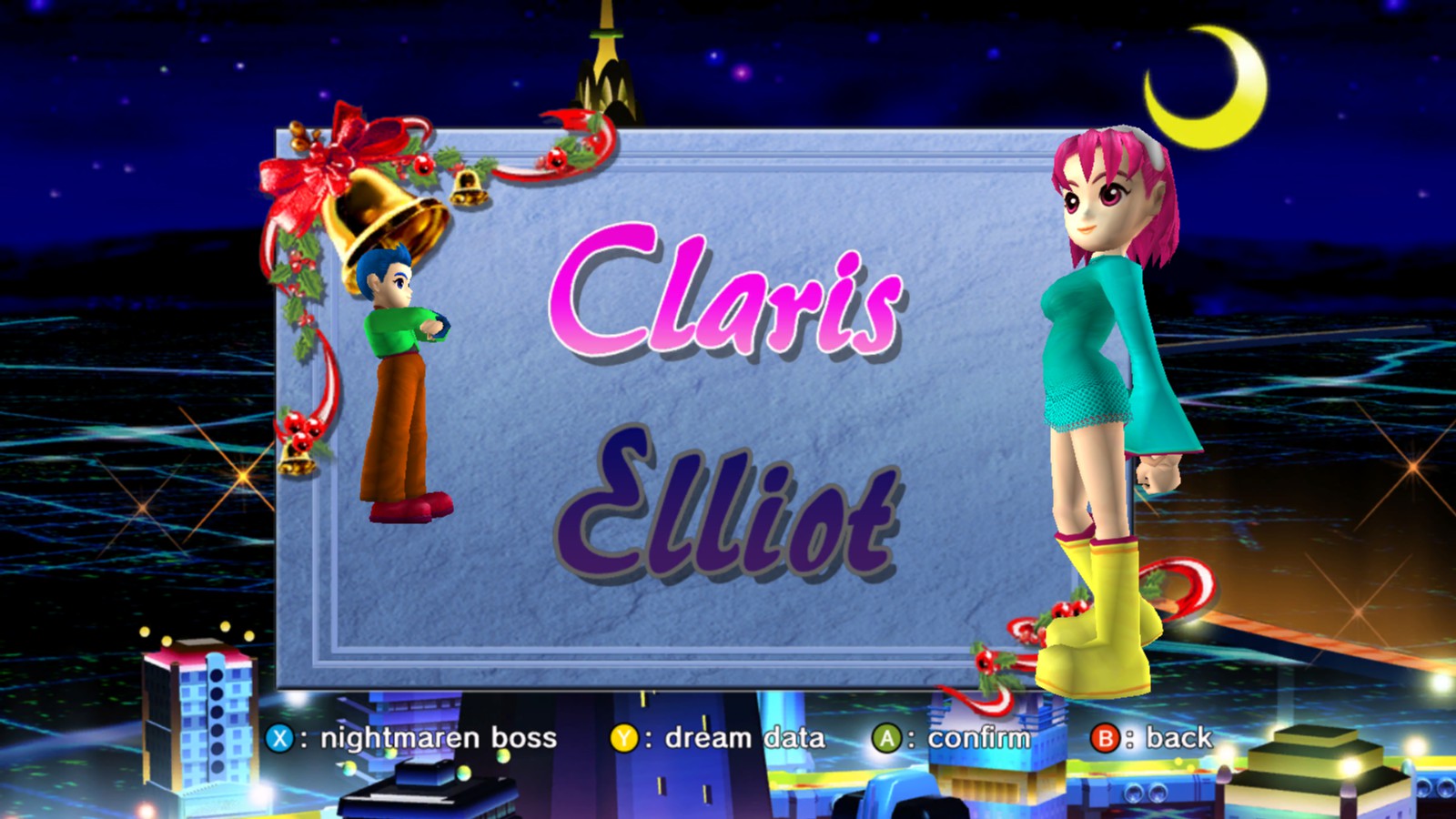 Any date during November or February will also have it's own unique Winter-themed title screen. 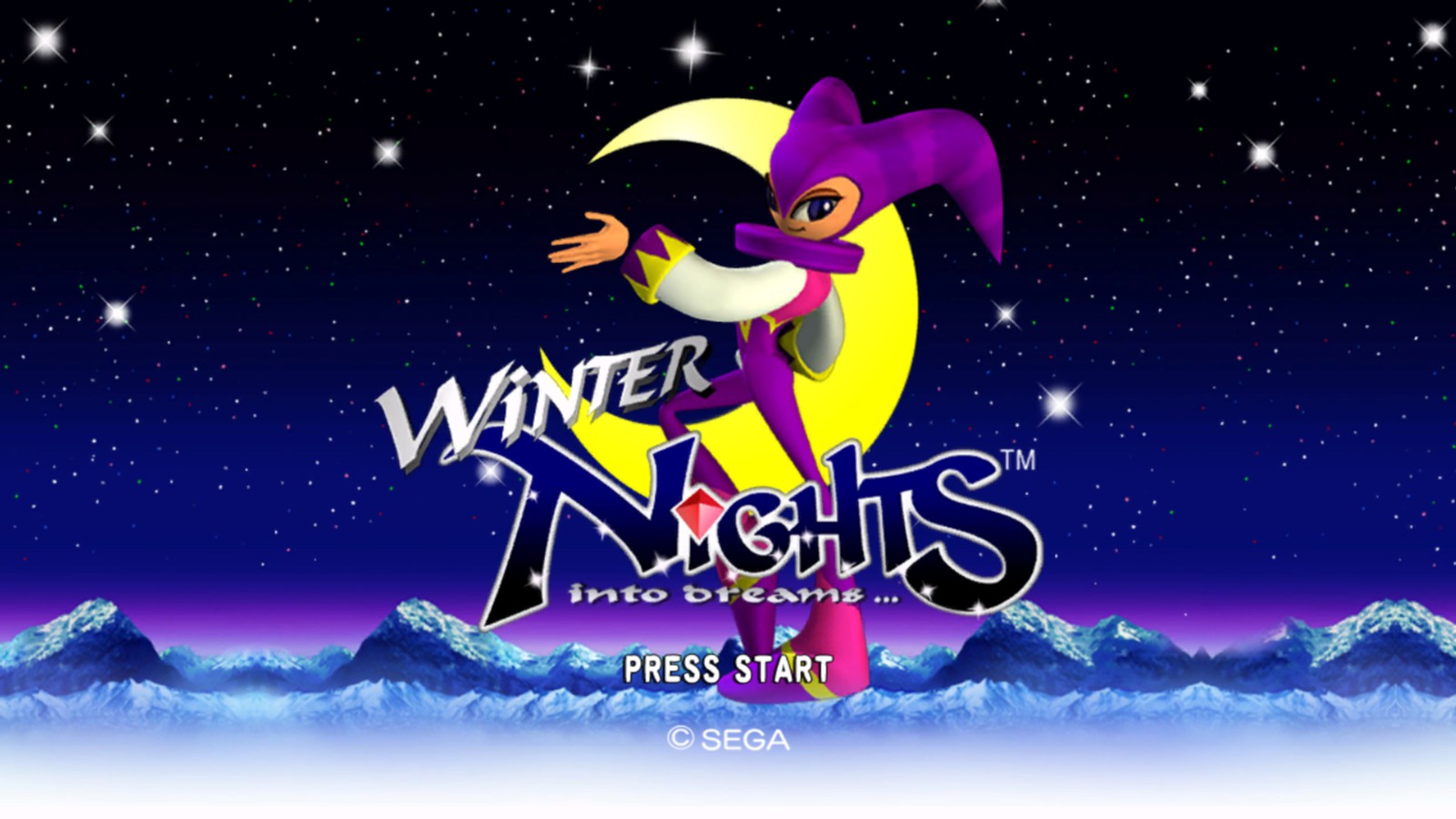 If the computer's internal clock is set to February 14th both Claris and Elliot's costumes will be changed to appropriately warm-looking outfits for late Winter in the Christmas Dreams mode. 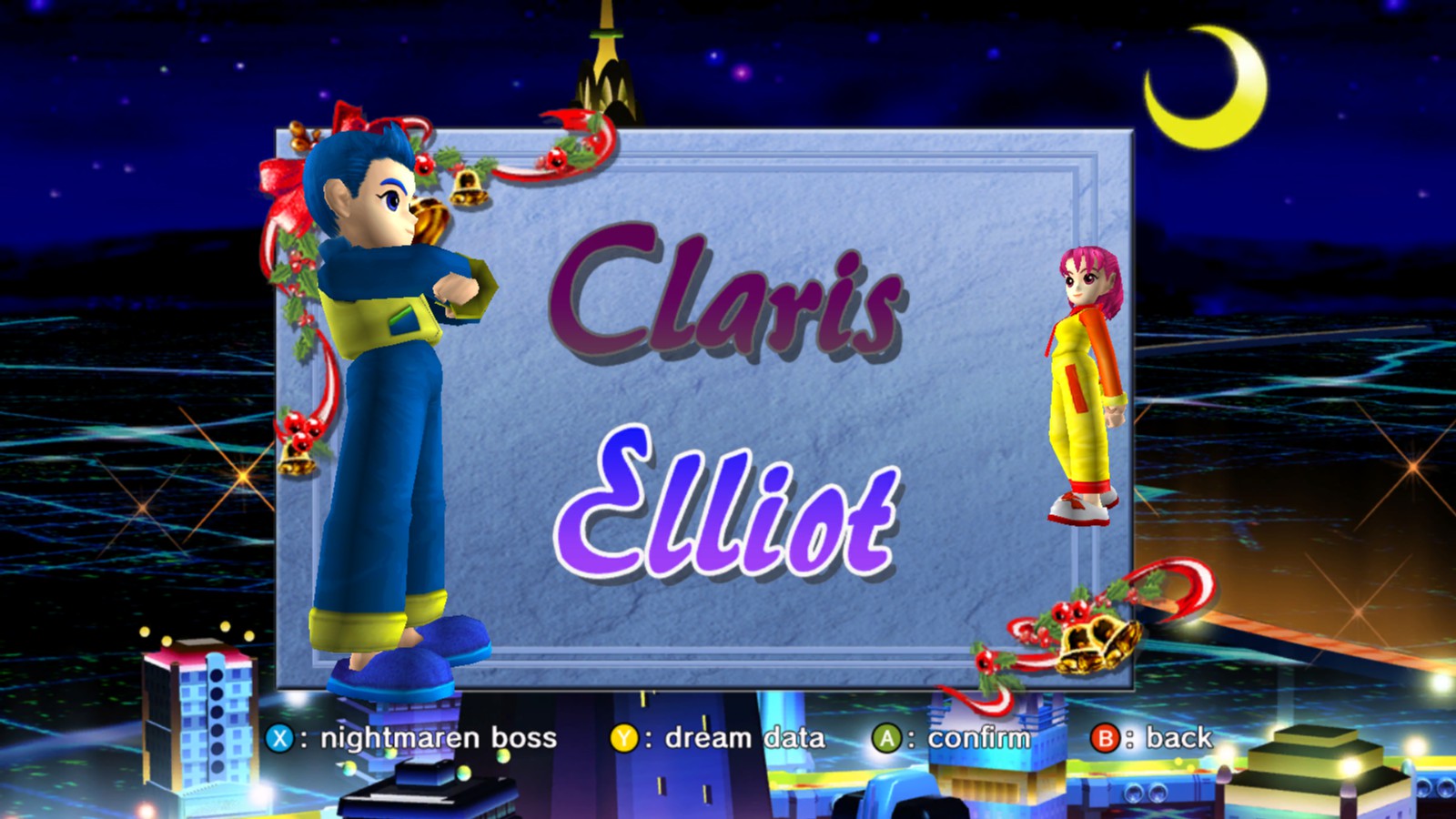 Playing the Christmas Dreams mode on this date will also alter the falling snow into falling hearts, just for Valentine's Day. 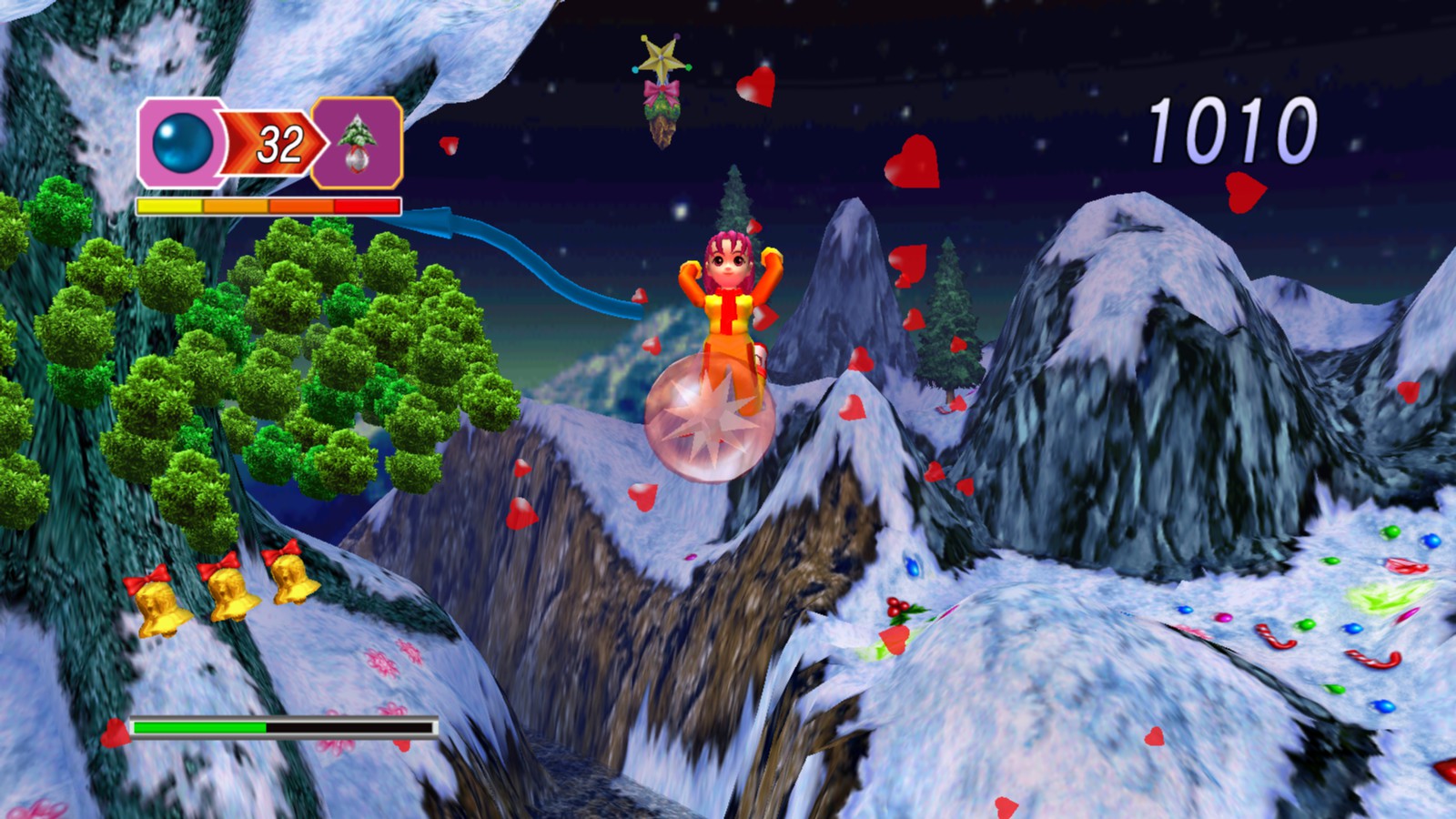 If the computer's internal clock is set to April Fools Day, the only change will be with Claris' Spring Valley level switching NiGHTS into Reala as the playable character. If the randomized boss mode is activated through the options menus there is also a chance that the player can continue using Reala during the battle between it and NiGHTS. 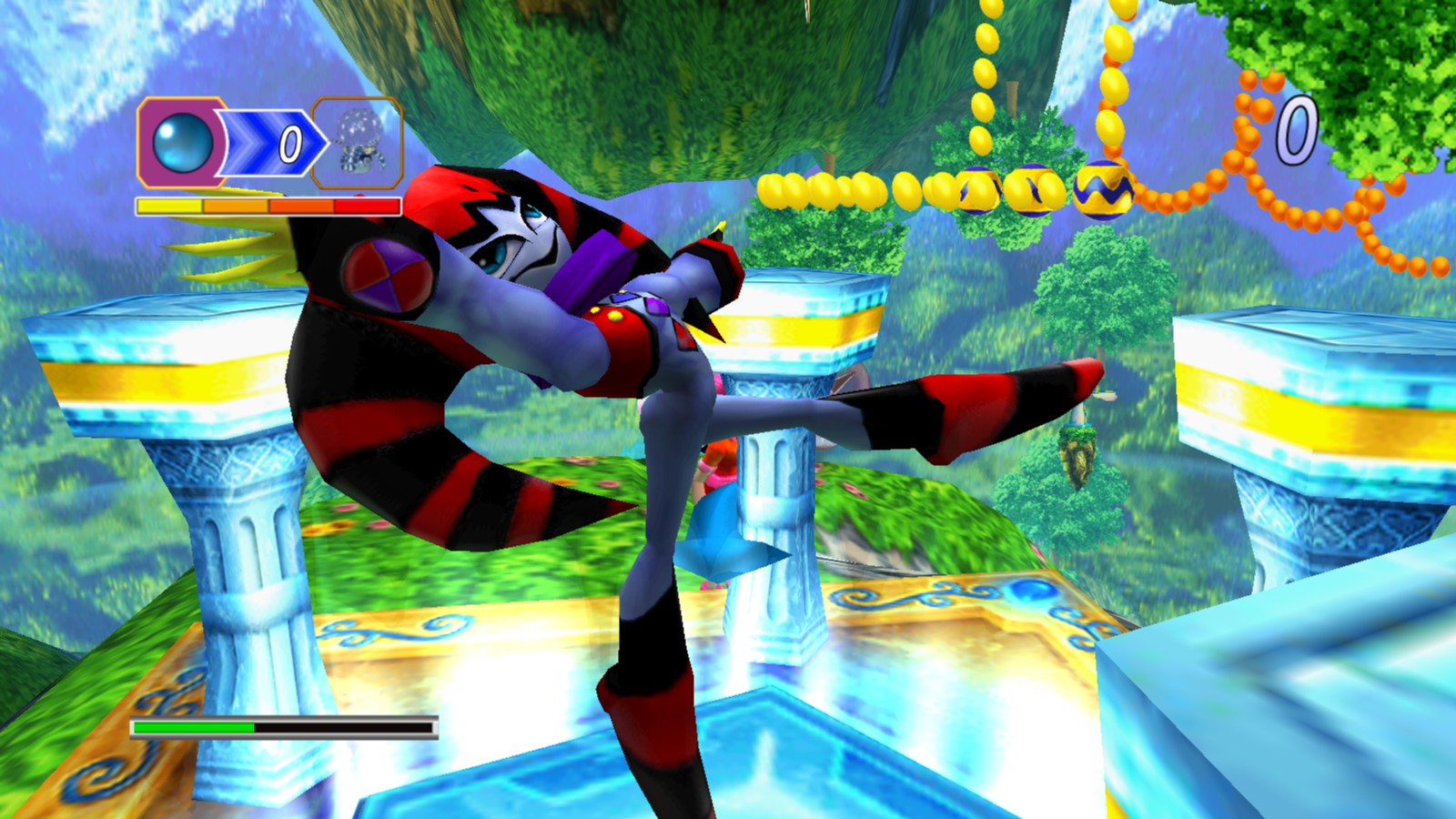 Starting on this date, selecting Elliot's Splash Garden level will have Claris replacing him as the playable character, along with a new bikini to celebrate the Summer. 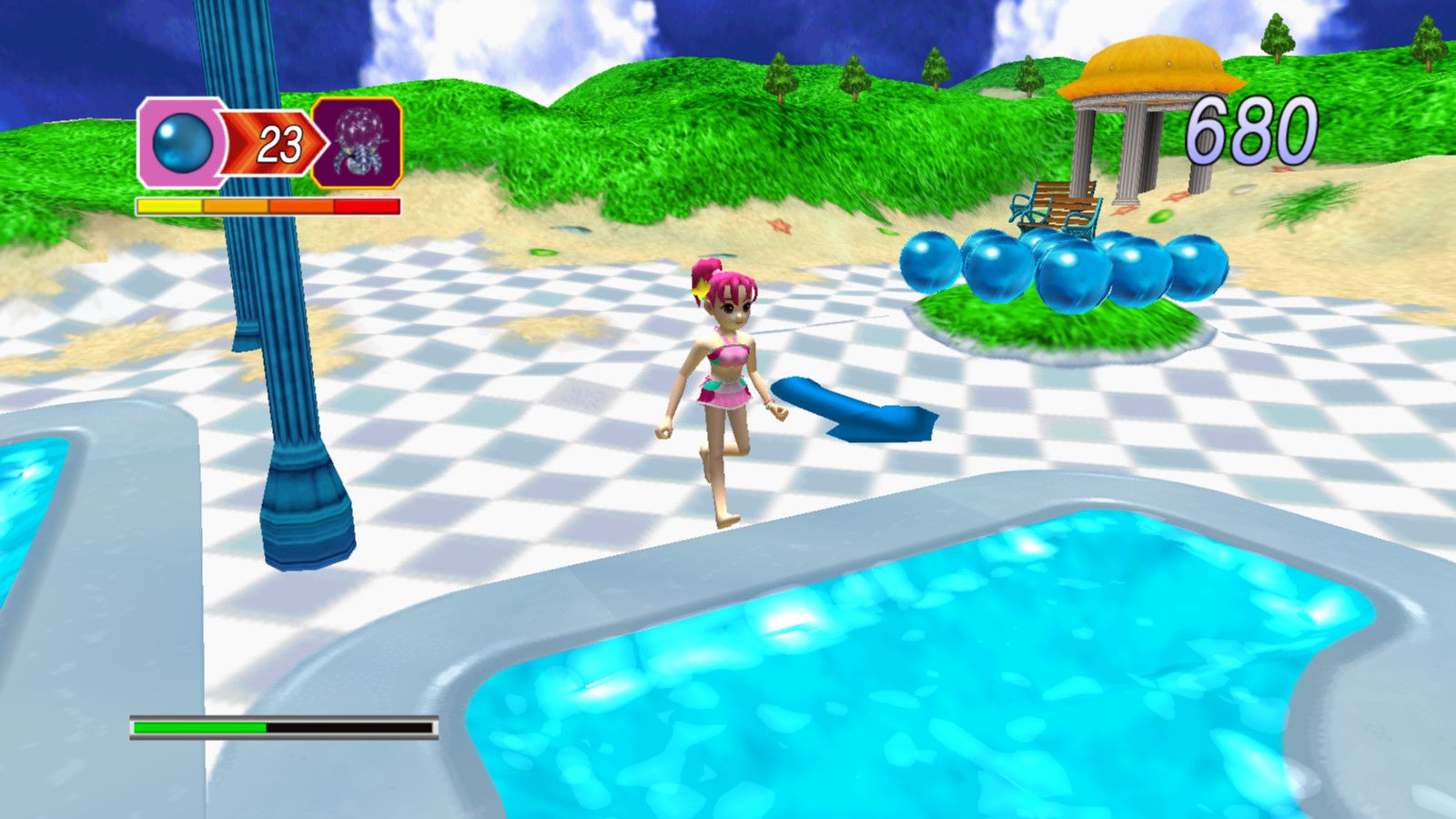 Similar to the previous costume, selecting the Splash Garden level on this date will now have Elliot in his own bathing suit. 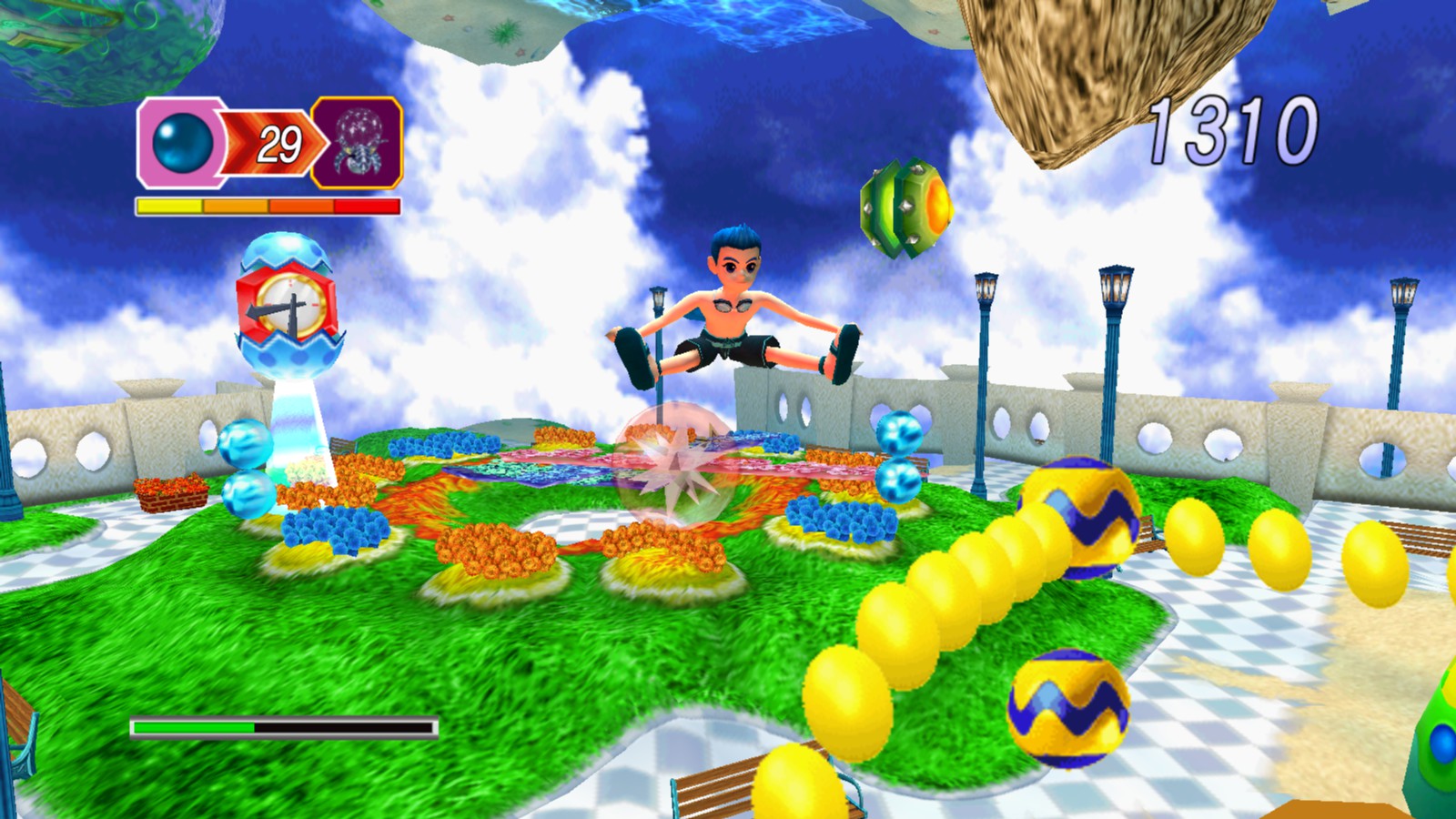 If the computer's internal clock is set to any day within October Claris' Mystic Forest level will have a new playable 'Ghost NiGHTS' costume variant that has a strange blue glow. Similar to the change with Reala for April 1st, this change does not alter gameplay in any way.

Also altered during this timeframe in the Mystic Forest level is Claris' design, which is based on childish, but cute witches from Japan. This can be accessed by the player on every day in October, except for Halloween day. 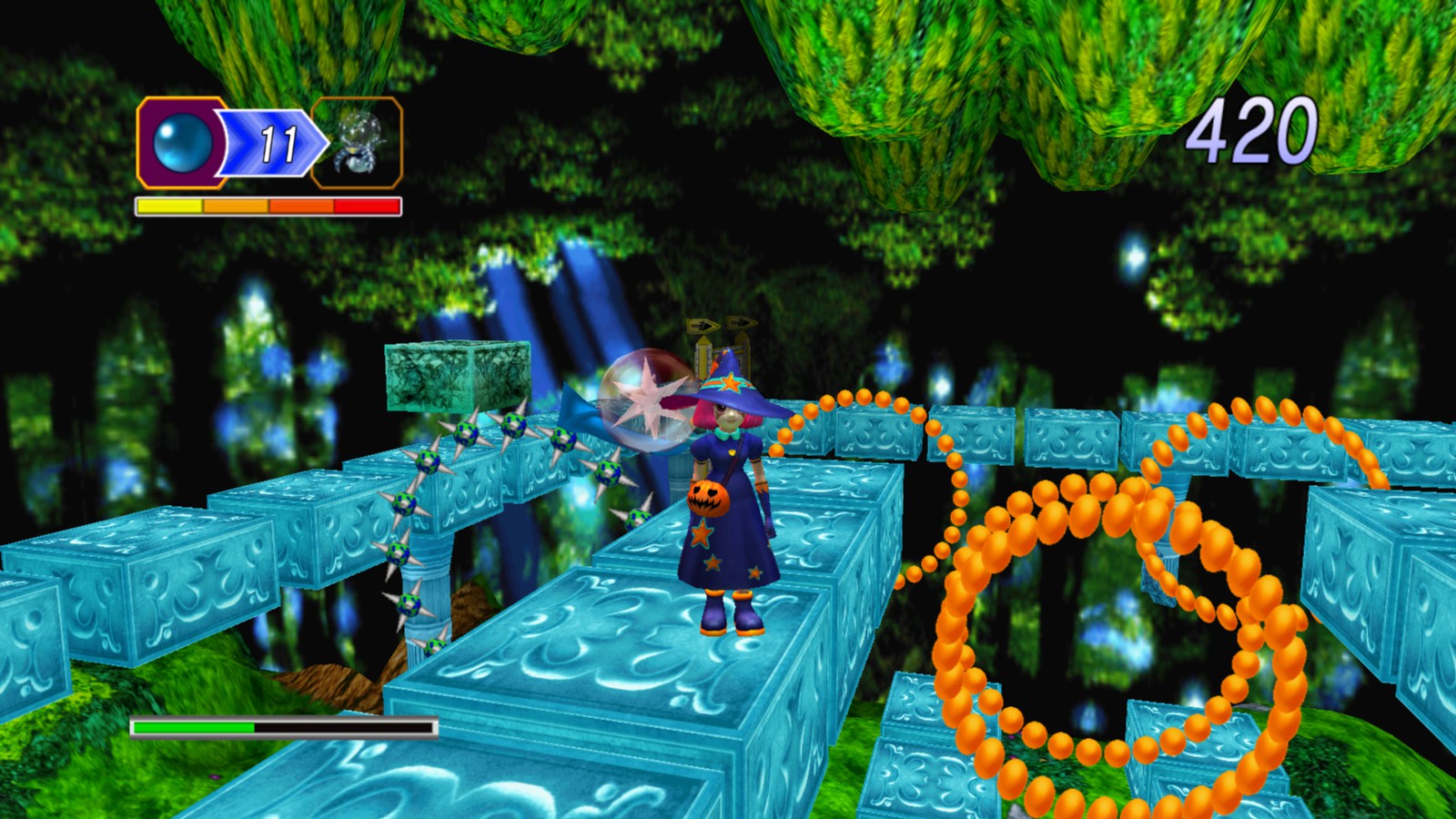 On Halloween day specifically, Elliot replaces Claris' in her Mystic Forest level in an outfit inspired by the vampire Count Dracula. 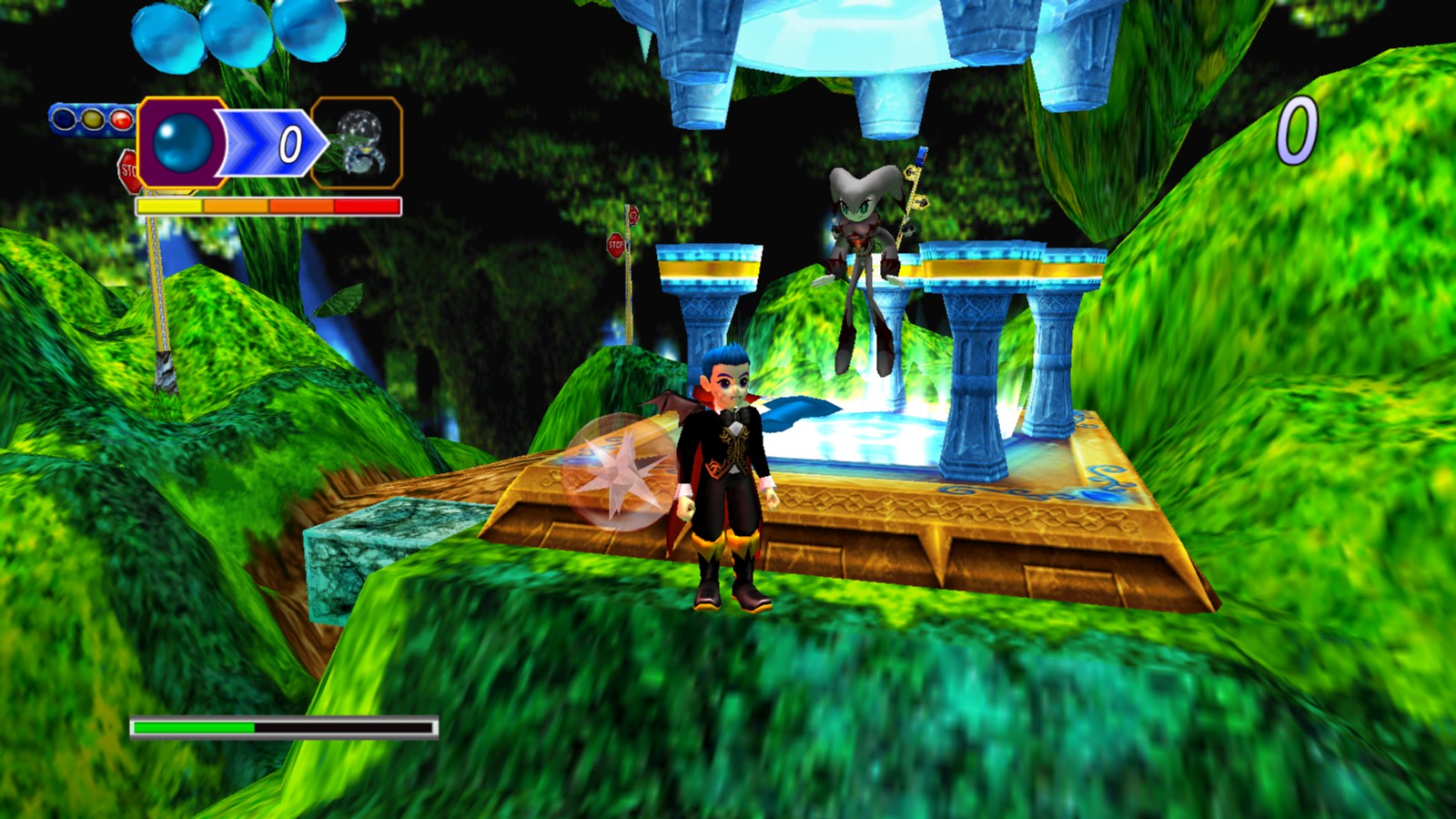 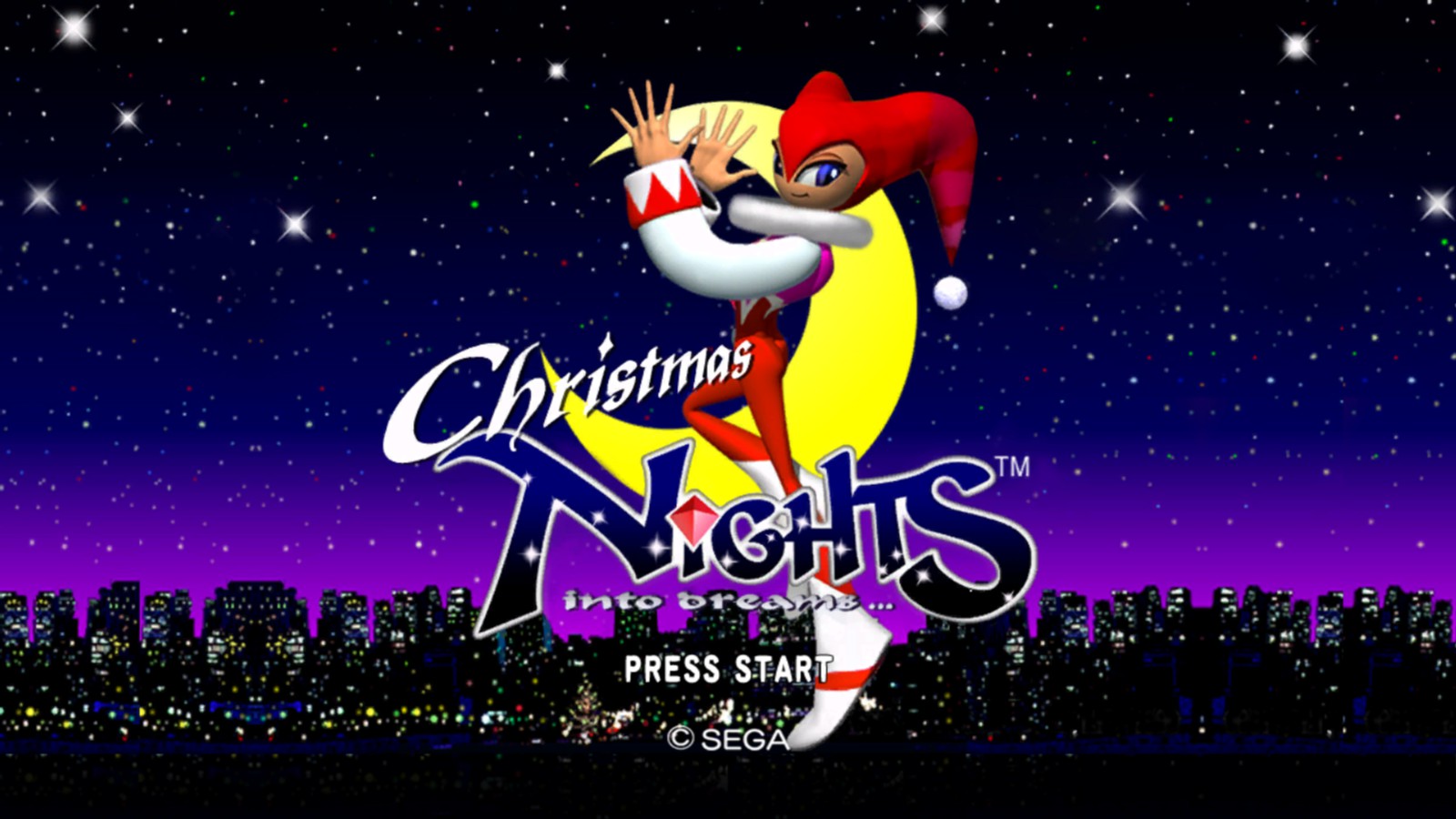 Missing SEGA Saturn Content
Although this is an excellent port of a true classic, some content is missing from the original Christmas NiGHTS for unknown reasons.

Playing Christmas NiGHTS at certain times of day between November and February would change certain things, like the background or what the snow looks like. This included:


I have heard for several years that Santa Claus appears flying by on Christmas Day, but have never been able to personally discover this across any versions of the game.

The menu screen was also greatly different and had content unlocking in a much different order.

Sonic the Hedgehog into Dreams 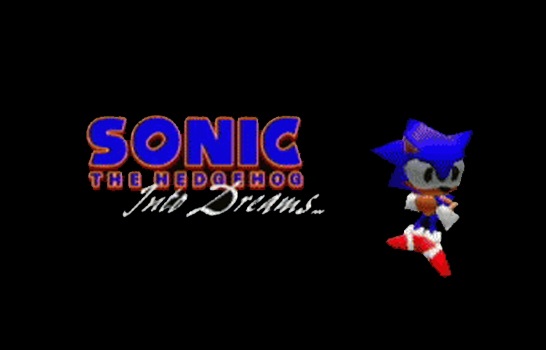 Designed as a unique experiment of sorts to see how Sonic the Hedgehog could potentially move in a full 3D space, Sonic the Hedgehog into Dreams is missing completely from each remastered version of NiGHTS. Elements of it were at one point a basis of the design for the cancelled Sonic X-Treme game on SEGA Saturn.

It was not especially well done as it is simply Claris' Spring Valley level without NiGHTS to fly through. Sonic played exactly like a slightly faster version of Claris and Elliot with a higher jump. Dr Robotnik provides comical replacement of the boss Puffy, as well as a remixed song from the European and Japanese versions of Sonic CD.
Conclusion
Thank you for reading my guide for this incredible game. I hope it gives you a higher level of appreciation for the game and helps you forget that Journey of Dreams ever happened.

Please inform me if there is anything that I may have missed or labled incorrectly. 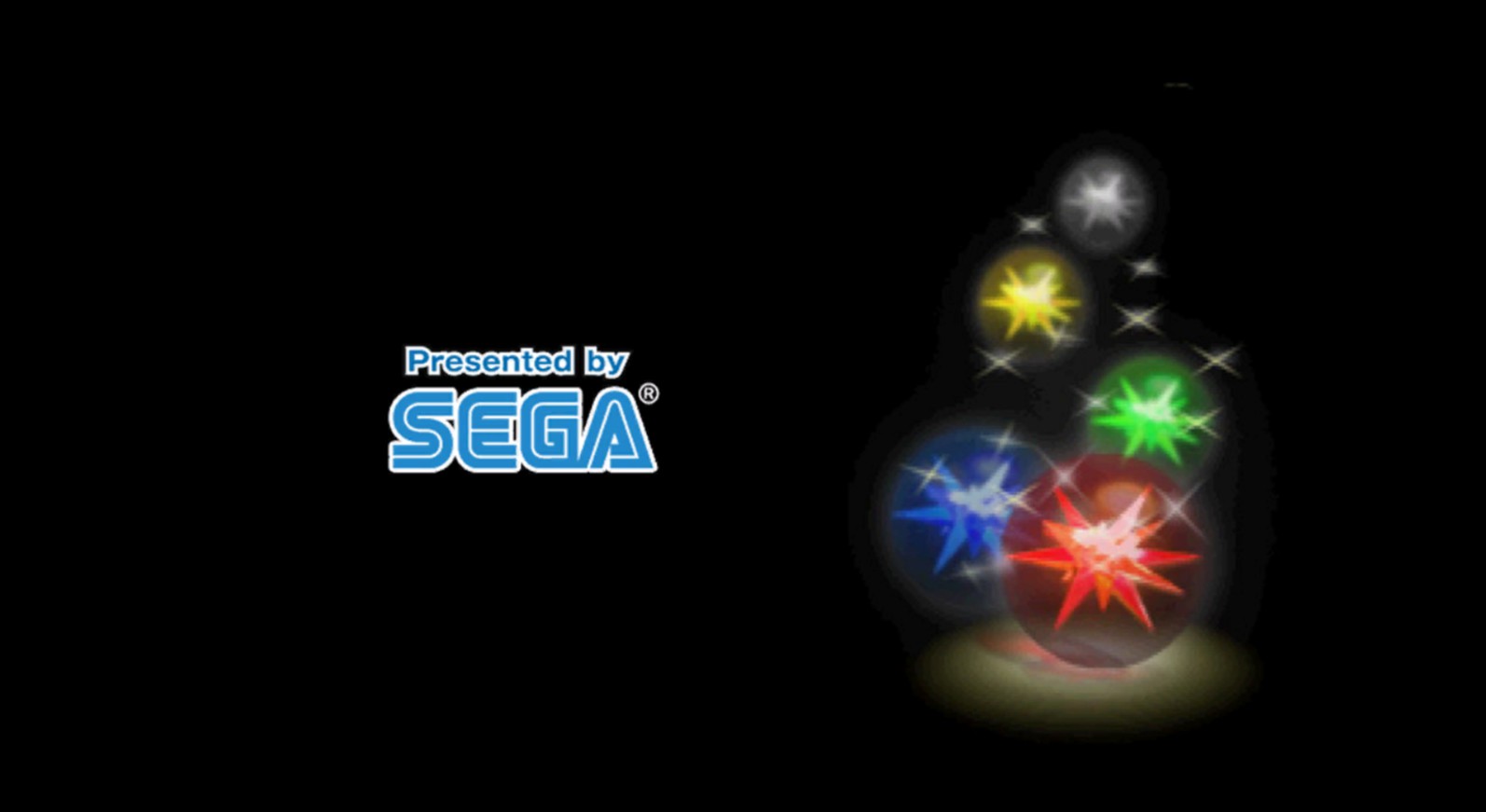 NiGHTS is owned by SEGA and was originally created by Sonic Team comprised of many of the core individuals that made many of the original Sonic the Hedgehog games, along with Ristar and portions of Phantasy Star. This release is developed by SEGA Shanghai and lead by Makoto Uchida, best known as the creator of Golden Axe.
< >
40 Comments

Daniel Oct 20, 2020 @ 3:45pm
Thanks for this guide. I have seen Santa flying by in both the original Saturn version and in the Steam port. It's a shame that there is content missing from the Saturn version of Christmas NiGHTS.

Lord Roo May 2, 2020 @ 6:06pm
Picaccino, I had NiGHTS Journey of Dreams on the Wii. You really aren't missing much. My kids grew up playing NiGHTS into Dreams with me and I was very hopeful for JOD, but they immediately destroyed the atmosphere with a lengthy explanation of things you simply found out playing NID, and worst of all, turned the androgynous spirits NiGHTS and Raela into female and male respectively. This change for some reason REALLY pissed me off, it just felt wrong for these dream-pixie characters to suddenly be gendered and have sexual tension between them. And the gameplay that was so revolutionary on the Saturn just didn't have the magic any more. It felt bland and generic, not the wonderland Nightopia was in NID. It ended up being one of the least played of my Wii disks and I ended up trading it in a few months later to get partial credit for Trauma Team. Now THERE'S a game that takes advantage of all the Wii can do!

picaccino Feb 4, 2019 @ 4:03am
The Christmas NiGHTS game was just a PROMOTIONAL DISC, just one level, not the full game. But contained many hidden secrets that original game didn't.. it's a real shame that is not completely implemented as some kind of bonus into the original game in remastered versions.. It is still one of my the most beloved games of my childhood.
I wish for Journey of Dreams to be remastered for PC too, I never played it because of the absence of Nintendo Wii..
< >