Store Page
Tabletop Simulator>  Workshop > SideRoomGames's Workshop
This item has been removed from the community because it violates Steam Community & Content Guidelines. It is only visible to you. If you believe your item has been removed by mistake, please contact Steam Support.
This item is incompatible with Tabletop Simulator. Please see the instructions page for reasons why this item might not work within Tabletop Simulator.
Current visibility: Hidden
This item will only be visible to you, admins, and anyone marked as a creator.
Current visibility: Friends-only
This item will only be visible in searches to you, your friends, and admins. 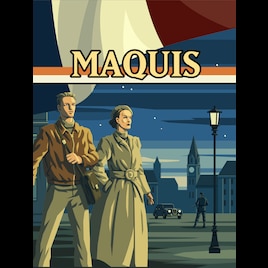 SideRoomGames
Offline
See the collection (may be hidden)

This item has been added to your Subscriptions. Some games will require you to relaunch them before the item will be downloaded.
Description
You are a member of the Resistance, a small band of freedom fighters attempting to dismantle the Nazi Occupation of France during World War II. The Axis-controlled government has installed a paramilitary militia called Milice, tasked with policing the populace and fighting the Resistance. Should the Resistance prove to be formidable, the government will not hesitate to call in the German Military to stamp out dissent.

You have 15 Days to complete 2 Missions before the Occupation discovers you. If you successfully complete them, the Resistance has won. However, if the town’s Morale drops to zero, or all 15 Days run out, the Occupation succeeds and takes over the town, crushing the Resistance. Engage the Nazi Occupation of France in une petite guerre to throw off the yoke of oppression and free your homeland!

Maquis is a solitaire worker-placement game with variable goals and a play time of approximately twenty minutes. The player places his resistance agents on spaces around town to achieve his goals - blowing up trains, publishing underground newspapers - but at the same time Milice collaborators and Wehrmacht soldiers patrol the area. Agents who can't make it back to the safe house at the end of the day are arrested, and never seen again.

Tyrant Apr 13, 2019 @ 8:07am
You made this workshop submission well in advance of making it public. That means this mod was never seen on the first page of 'Most recent'.

For exposure, I recommend deleting and reuploading your workshop submission.
< >