Store Page
Space Engineers >  Workshop > Nikolas March's Workshop
This item has been removed from the community because it violates Steam Community & Content Guidelines. It is only visible to you. If you believe your item has been removed by mistake, please contact Steam Support.
This item is incompatible with Space Engineers. Please see the instructions page for reasons why this item might not work within Space Engineers.
Current visibility: Hidden
This item will only be visible to you, admins, and anyone marked as a creator.
Current visibility: Friends-only
This item will only be visible in searches to you, your friends, and admins. 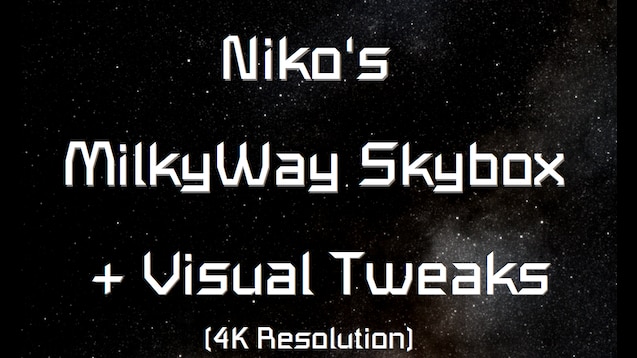 Nikolas March
Offline
See all 66 collections (some may be hidden)

This item has been added to your Subscriptions. Some games will require you to relaunch them before the item will be downloaded.
Description
This is Darth BioMech's (not mine) insane resolution 4K Milkyway Skybox, with my own lighting alterations, and some other tweaks.

Visual tweaks: Chromatic Aberration (fullscreen blur disabled) and Vignette reduced to their minimal visual levels, Bloom has been reduced, increased, reduced again, altered here there and everywhere haha. The skybox itself makes the nights on planets darker than in vanilla, not 100% sure why, but i like it, even though i tried unsuccessfully to brighten it up just a fraction, the WhitePoint light has been reduced so asteroids arent as blinding when up close, reflected sunlight is only 'overexposed' when the sun has a more good angle (+/- 15%) to you, to further reduce being blinded.
The screen gunk is also gone, ya know, the visor dirt that is still there when your visor is up, thanx to Digi, thanx also go to Xero for help with the various bloom and other shader settings in this mod, and Kienata for some Sun Love :)

We need many versions of skybox mods to account for different peoples tastes, though it would be nice if these graphical settings were in the game's GRAPHICS options and not in a place that they need to be controlled by a MOD!

This is designed to the way that I like it, and i will probably upload a few other skybox versions of it :)
The only thing i dont like, is the way that the sun looks when you look directly at it, im still altering this as i learn something

Want your game to look even better, no matter what skybox you are using? Then use this mod here
http://steamcommunity.com/sharedfiles/filedetails/?id=1296003427
Whatever save-game/server is running the mod above, it will temporarily alter the Model level of detail settings to fix what should have been fixed long ago with the very bad model LODing.