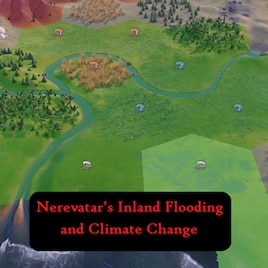 Nerevatar
Offline
See all 167 collections (some may be hidden)

This item has been added to your Subscriptions. Some games will require you to relaunch them before the item will be downloaded.
Description
Version 1.3 - See change log to the right of the pictures
Introduction
Happy that Climate Change barely matters, and is only ever so slightly noticeable for a coastal city? Well this mod is not for you then!

With this mod Climate Change flooding can be devastating for your civilization and all other civilizations on the planet. Entire kingdoms can potentially flood and be submerged! Are you ready to face the challenge of Climate Change? Can you build a civilization that will stand the test of time, and floods?

Note: This mod does not affect Primordial map script unless the workaround in the change log is used.

Features
This mod will allow all map scripts (that don't already modify this) to generate inland flooding! The following types of flooding has been added:


Check out the screenshots to get an idea of the possibilities! The settler lense is activated to show the flooding indicator, which is the reason for the coloring of the tiles.

This mod also makes some supporting changes to Climate Change to make this happen, namely:

Feedback
Please leave any feedback in the comments section. I'm very interested in hearing what you think, and any suggestions / ideas!

And please rate if you like it ;-) It will help more people experience inland flooding!

Incompatible mods
I can't test every mod, but I read all comments, and if you report something not working I will look into it and add it to this this. So far the following has been reported and tested as not compatible:

I also recommend checking out my other mods
Better World Congress : https://steamcommunity.com/sharedfiles/filedetails/?id=2429588635 Improves the World Congress by reworking most Resolutions. Generally, if you pick the right side (A vs B) you will get some part of the effect, while the actually winner will get an even more powerful effect. Upping the stakes also helps to make WC feel more interesting and impactful.

Seven Seas : https://steamcommunity.com/sharedfiles/filedetails/?id=1780010944 increases the amount of water on the Seven Seas map, to avoid each of the "seas" to simply be small lakes which only have 1-2 civs on it's shore.
< >
120 Comments

Kurisu Jul 6 @ 11:50am
Is there a way to make tile floods raze flooded cities?

Nerevatar  [author] Jun 18 @ 12:15am
If you have a floodable river (as in the tile can be submerged) you can also build the flood barrier. Try to check ownership of the tile, since it might belong to an unexpected city.

This behavior is hardcoded so it can't be changed.

Kurisu Jun 16 @ 12:19am
I have noticed when playing with this mod you are unable to build flood barriers when you have no coastal flooding tiles, meaning if you are inland with a floodable river, you are screwed. I would love if there was a middle ground between this mod and vanilla where it flooded not just the coast tiles but not too far.

Secondly: The reason I don't plan on buying it is a matter of principle since I believe it is such a low effort mode, and I don't want to support that. Vote with your wallet and all that. Having you gift it to me would defeat that principle. Sorry for being a party pooper.

Nerevatar  [author] Mar 30 @ 12:29pm
That would be a very cool late-game super-weapon! Taking a quick look at the Apocalypse mode files it would probably be possible to make something like this re-using some Soothsayer logic. But since I don't own Apocalypse mode and don't plan on buying it I won't be able to create it, sorry.

Calibrated Mar 29 @ 11:22pm
ooooo weather controller devise!! can you imagine creating hurricanes to "nuke" your enemies? I can.

mandibuzz lightyear Mar 25 @ 7:45pm
that's fair! maybe we should all badger firaxis to implement that themselves lol
< >