Store Page
Conan Exiles >  Workshop > Midnight's Workshop
This item has been removed from the community because it violates Steam Community & Content Guidelines. It is only visible to you. If you believe your item has been removed by mistake, please contact Steam Support.
This item is incompatible with Conan Exiles. Please see the instructions page for reasons why this item might not work within Conan Exiles.
Current visibility: Hidden
This item will only be visible to you, admins, and anyone marked as a creator.
Current visibility: Friends-only
This item will only be visible in searches to you, your friends, and admins. 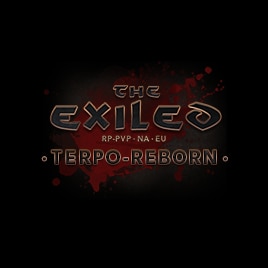 This item has been added to your Subscriptions. Some games will require you to relaunch them before the item will be downloaded.
In 1 collection by Midnight
The Exiled RP - mods collections 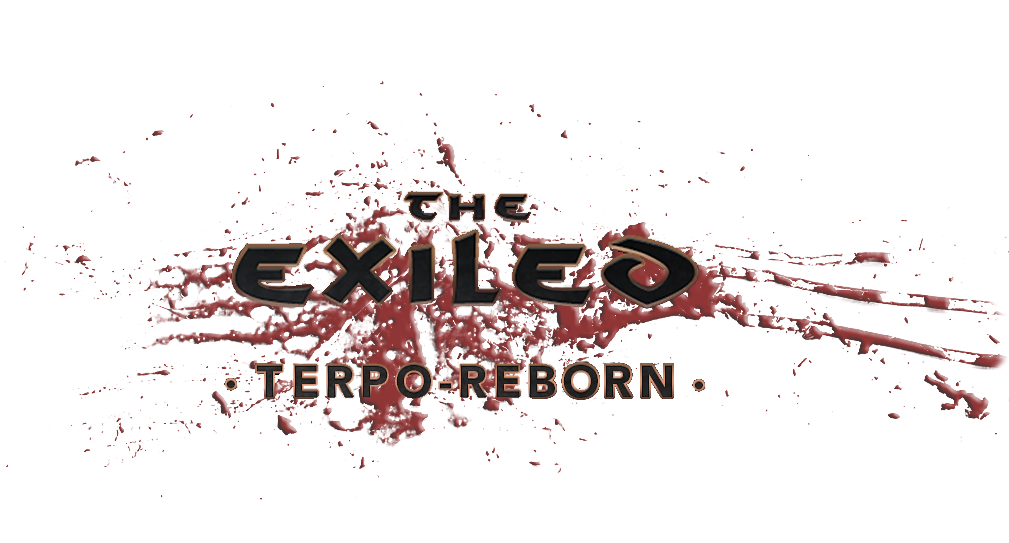 I want to preface this description by saying that TERPO-Reborn is first and foremost the original server mod for the The Exiled-RP PvP server and that the main goal of the mod is to conveniently package several quality-of-life features for our server into a single mod. Please keep that in mind while going through the following list of all those features and decide for yourself if it's still of interest for your server.

Alternate Character Slot
Important: This part of the mod will not work in single player games and unless an additional component is installed by the server admin. See Admin Information below for more information on this!

This allows players to have up to nine characters per account on a single server. The total number of slots as well as its distribution among normal players and admins can be adjusted by the server administration team. 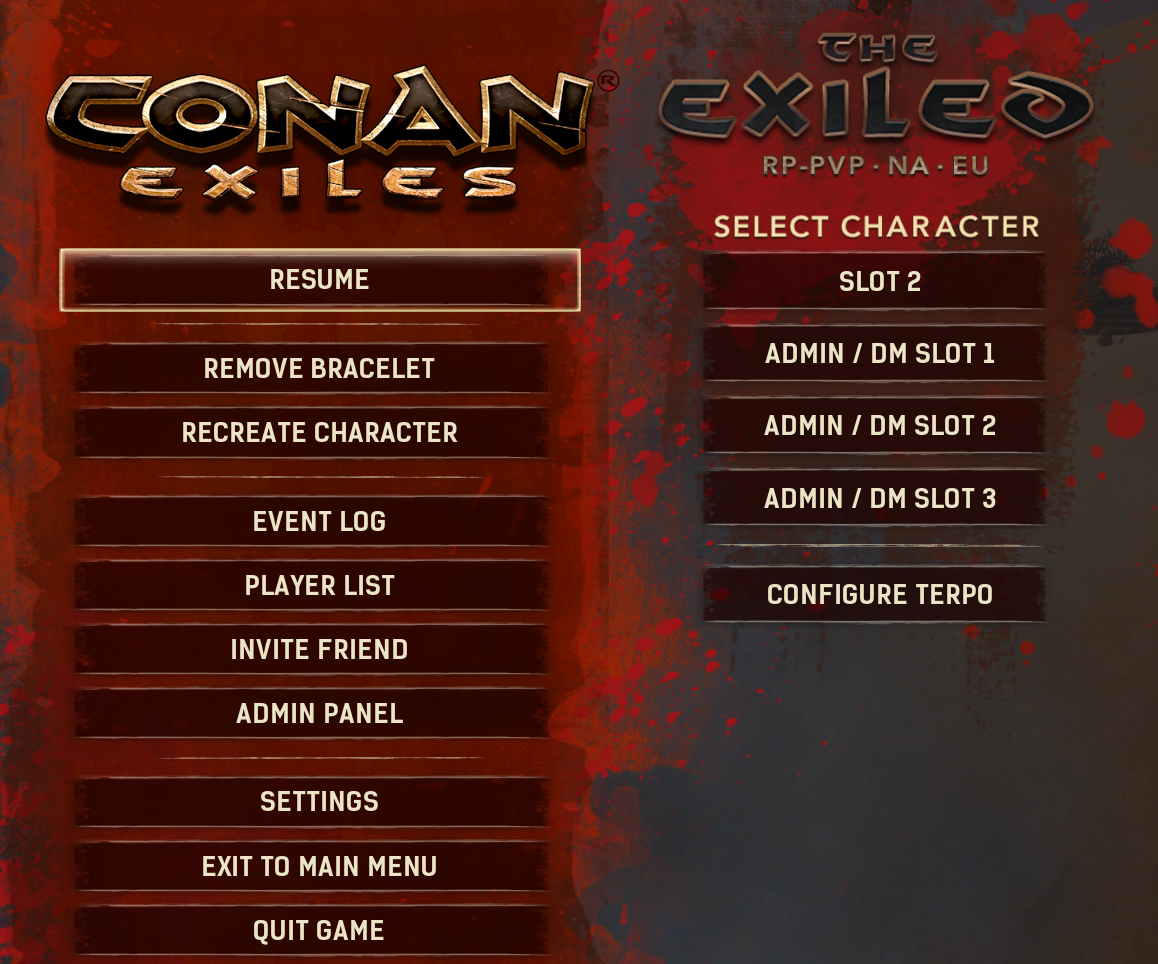 The config menu as well as the slots can be accessed via in-game [Esc] key menu and clicking on one of the right hand buttons. The slot buttons will log the player out to the main menu just like the normal exit button would have done. However at the next login the player will login on that character slot. 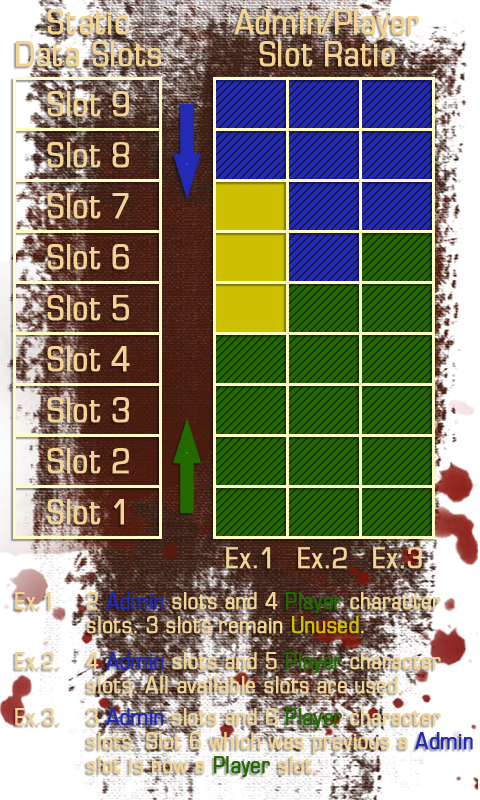 The above image illustrates how characters are stored in those slots and how changing the number of player character and admin slots affects them. It is important to understand that changing those settings will not create or remove characters but merely changes who can access them!

Notice: Due to the nature of those slots and how the game was designed, certain other game or mod features may not work as expected (e.g. Pippi ranks, the /sethome and /home commands apply to the account, not to the character).

Solely Cosmetic Functionality of Warpaints
This feature removes the statistical bonuses for warpaints, thus allowing them to be optional in the customization of a character. Instead, the points have been reallocated to a character's base Attribute points. Characters stand to gain thirty additional Attribute points throughout the leveling process (up to level 60), increasing the base 390 Attribute points to 420.

These points are not awarded retroactively and may have to be set manually if the mod is not installed on a fresh server.

Additional Stat Bonus to Flawless Weaponry
This feature adds greater value to flawless, epic weapons, thus making them more interesting alternatives to legendary weapons. The mod grants most of them +3 in an appropriate stat. This will likely still leave them worse than most legendaries but closes the gap between both types of weaponry.

Hiding Additional Feats and Recipes
TERPO-Reborn hides the Cartographer feat, thus preventing players from crafting a map room. This allows the map room to only be spawned by server administration. However, players who already have the feat will not have it removed from them by the mod.
In addition, the following feats are hidden using the same mechanism of Cartographer:

This feature is geared towards the needs of the mod's home server and can safely be ignored by server admins that do not use any of the listed mods.

Additional Items
The TERPO-Reborn mod adds a hide rug decor item ("Bed - Hide") that can be used as a bed to bind yourself to. It also adds a few inventory items designed that are spawnable by administrators and only meant to be used as currency, quest items, keys for egress doors, etc. ("Guilder", "Large, Undead Finger", "Temple of the Four Winds Key" and "Crown of the Ancestor")

Dragon Bone Arrow Recipe Fix
This feature increases the Dragon Bone Arrow crafting to a stack of ten arrows as opposed to the prior output of a single arrow to be consistent with vanilla arrow production.

Rcon Commands
All TERPO Rcon commands start with the leading keyword "TERPO" followed by the actual command (e.g. TERPO getTime). Commands currently available are:
More commands that will allow manual tracking and maintaining of the player slots are currently being tested and might be added in future updates.

In order for this mod to work server admins need to install an SQL trigger to the game.db file of the server.
This trigger causes the database to react to TERPO-Reborn entries that are created when the user selects the desired character slot. This is what allows the selection of the additional character slot to make you login on that slot. If the trigger is not installed, nothing will occur when the alternative character slot buttons are selected by a player.

The trigger script can be downloaded here[drive.google.com]

Compatibility
Any mod that changes the levels or how many stat points players gain per level, as well as anything modifying the weapons directly affected by the mod (as per feature list above), will have to be loaded after TERPO-Reborn to ensure it's running fine. 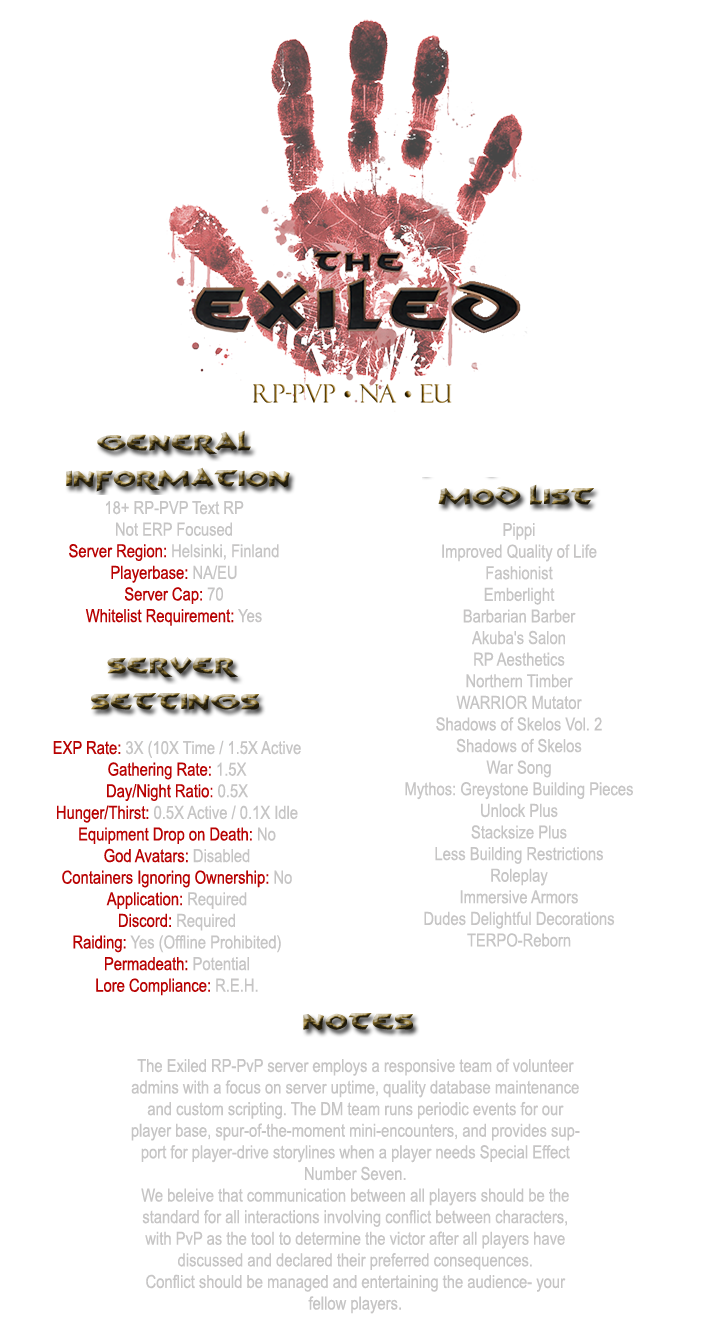 Midnight  [author] Nov 10, 2021 @ 12:41pm
Hi @WalkingSteph. I don't think what you suggest is possible. At least not the way I block feats and recipes right now. However I would like to eventually make a revised edition of my mod that should be easier to install and maintain. If and when I get to do that, I'd probably make two mods and have one only include the character slots feature.

WalkingSteph Nov 9, 2021 @ 10:14am
Hi Midnight, the character slots are a very cool feature. i hope to get them running on my dedicated server.
I can understand that you don't want to maintain an additional stand alone mod. But i have a suggestion:
Is it possible to make the list of blocked feats editable via admin menu? That would save you some updates and other users would not be locked to your settings on her servers.

Dreamwell May 13, 2020 @ 4:52pm
Haha, I do play on Exiled RP. It's just a bit too rubber-bandy for me for some reason, so I indulge on other servers as well.
It'd be cool if you made it interesting for other parties! It's a useful feature.

Midnight  [author] May 13, 2020 @ 11:53am
@Dreamwell No there isn't and I don't plan on making one. The mod is first and foremost supposed to be a servermod for The Exiled RP. Also as mentioned in the description, the character switch only works with an additional component that's not downloaded and installed alongside the mod.
However, since people keep asking me about this, I may update make a few changes in the near future that could potentially make it interesting for other parties.

Dreamwell May 13, 2020 @ 2:50am
The character switch feature - is there a standalone mod for it somewhere? For when you don't want everything else. :)

Kímåní Mar 17, 2019 @ 10:35pm
@Midnight I have indeed noticed that. Now since I am planning to join your server once I got a decent background story ready for my char, perhaps we can discuss this some more in the future?