Store Page
RimWorld >  Workshop > AUTOMATIC's Workshop
This item has been removed from the community because it violates Steam Community & Content Guidelines. It is only visible to you. If you believe your item has been removed by mistake, please contact Steam Support.
This item is incompatible with RimWorld. Please see the instructions page for reasons why this item might not work within RimWorld.
Current visibility: Hidden
This item will only be visible to you, admins, and anyone marked as a creator.
Current visibility: Friends-only
This item will only be visible in searches to you, your friends, and admins. 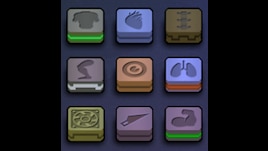 AUTOMATIC
Online
See all 24512 collections (some may be hidden)

This item has been added to your Subscriptions. Some games will require you to relaunch them before the item will be downloaded.
Description
ABOUT
Changes the graphic for body part boxes and adds icons depending on what's inside.

MOD COMPATIBILITY
In addition to vanilla, Bionic icons has built-in icons for the following mods:

Any mods that use same textures for body part boxes as vanilla are also supported, for example:


Any other mods will most likely keep their own icons.

But are there any hard incompatibilities?!?!

MODDER INSTRUCTIONS
If you want to use functionality from this mod in yours, you can do this using just XML - compatibility patches for above mods are written in XML, using two new defs: BionicIconsTextureDef (defines which icons we shall be replacing) and BionicIconsIconDef (defines what icon to use as a replacement).

UPDATES
24-Jun-2022
- changed internal texture generation to hopefully not break other mods with "Illegal characters in path" exception.
- updated box graphics to not have horrible ugly white outline when downscaled.

AUTOMATIC  [author] Jun 23 @ 7:54pm
Steve4448, LuneFox:
I was not able to reproduce those errors on my machine, but I made some changes that should likely make the problem go away.

Steve4448 Jun 11 @ 8:42pm
I found a problem that causes the "Organ cultivation vat" to not work from the mod "Yet another prosthetic expansion mod - Core" (no options visible when selected, causes lag).

I've traced it down and was able to cause the problem to happen with only these two mods enabled (and required libraries). Here is the log: https://gist.github.com/HugsLibRecordKeeper/0180a2ca14858f206f004a96540146eb

Hopefully you can look into this when you get the time, thank you for your useful mod!

LuneFox Apr 28 @ 1:28am
caught an error when using character edit try to add item at bodypart filter or search item at all filter mode

Slye_Fox Feb 13 @ 5:59am
Any chance of a 'Eccentric Tech - Cosmetic Modifications' compatibility patch?

Ace Feb 2 @ 1:55am
Hello, is it compatible with superb prosthetic?

mrclumps8973 Nov 22, 2021 @ 10:11pm
For whatever reason in 1.2 this mod seems to have stopped working. No matter what I do or how many times I restore files or reinstall the mod the textures refuse to load