Store Page
Kenshi>  Workshop > turbogum's Workshop
This item has been removed from the community because it violates Steam Community & Content Guidelines. It is only visible to you. If you believe your item has been removed by mistake, please contact Steam Support.
This item is incompatible with Kenshi. Please see the instructions page for reasons why this item might not work within Kenshi.
Current visibility: Hidden
This item will only be visible to you, admins, and anyone marked as a creator.
Current visibility: Friends-only
This item will only be visible in searches to you, your friends, and admins. 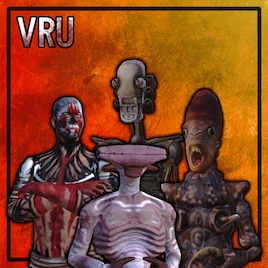 turbogum
Offline
See all 109 collections (some may be hidden)

This item has been added to your Subscriptions. Some games will require you to relaunch them before the item will be downloaded.
Description
Work on the mod / update suspended for indefinite amount of time.
Since I've lost all of the mod files when my old PC died, I'm not sure if I'll be able to finish the mod
BIG UPDATE INCOMING
I'm currently working on a pretty big update which will add appropriate fight or flee responses to almost all vanilla NPCs, meaning that you will no longer be safe as a Fishman or Southern Hiver among Greenlanders. To compensate for the (lore-friendly) overall hostility, I'm adding alternative game starts for each of the naturally unfriendly races, making them start in their faction's major locations with 100 relation points (ally status) towards them. I'll be also adding simple traders for the races / starting zones that lack them, so that you'll have a place to sell your junk at in the beginning. There's one exception though: I'm not going to add game start for Cannibals, since lots of people including myself are using the Reactive World mod which splits them into many opposing tribes, which makes things much more complicated.

Summary
Vanilla Races Unlocked is a really small and simple mod that unlocks all of the pre-existing humanoid races and sub-races for character creation menu, making them fully playable.

Take in mind that these races are not some "copies" designed with player in mind, in the base game they're used almost exclusively by NPCs (technically Southern Hive Worker Drone, Soldierbot and P4 Unit can be recruited, but not created), which means that none of their health statistics, immunities or racial bonuses have been adjusted, you're getting exactly the same values as the NPCs use, with all the perks and cons that come from that absolute lack of balance.

All of the unlocked races and sub-races have new or extended (in case of Hivers and Skeleton models) descriptions that I tried to keep as lore-friendly as possible, going a little further into the Skeleton design category though, basically implying that they've been designed with different purposes. The descriptions themselves are rather short and hopefully informative as they include mentions of racial immunities to weather effects or their lack of.

If you encounter any issues while playing as one of the unlocked races or sub-races, or you have a GOOD idea on how I could improve the mod, then feel free to comment below.
< >
33 Comments

I did it on purpose, because according to lore cannibals are descendants of humans that devolved into flesh eating savages due to "environmental toxins, the effects of lab experiments, or simply severe famine".

I figured out it'd look cleaner and make more sense to set them as a sub-species of humans rather than a completely separate race.

SoggyLoafOfBread May 16, 2019 @ 1:55pm
seems you made a mistake and put cannibals in the human subspecies

last time i checked cannibals weren't human at all

GhostSeeker May 2, 2019 @ 4:51pm
It's great to hear, that mod is not completely abandoned. Yeah, i know how boring it can be, since i was modding some other games myself, good luck with that :). Looking forward to try out updated mod.

Don't get me wrong, it's not that hard to pull off the relations, since I've got a bunch of finished dialogue packages for various races, so all I have to do now is to dump them into NPC dialogue packs. Problem is that I have to do this one by one so it's a quite long and honestly boring process. Then I'll also have to quickly add the game starts and traders to each hostile faction that doesn't have them.

I'd feel bad about abandoning the mod, so I'll most likely finish it, but I don't really know when, sorry.

GhostSeeker May 2, 2019 @ 3:56pm
So, you're still working on update or was idea abandoned? It would be really cool to roleplay fishman or southern hiver with thier own start.

turbogum  [author] Mar 20, 2019 @ 4:12am
@كاذب زنجي
I might actually do that while working on the bigger update, although I recently put the mod on hold, since I was busy with other things.

As for Fogmen, Fishmen and Cannibals, I'd say that it's best to use them in a combination with cannibalism mod, especially since in the next update most (not all) NPCs / factions will be hostile towards them, so your early-mid game food gathering will be pretty limited.
I'll also add special game starts for them, so that you can start out either as a single member of their species or a group of five inside of one of their major locations while being fully allied with their respective factions. The only exception will be Cannibals, since Reactive World mod makes it "a bit" more complicated, and lots of people use it.

-AWP- peepee man Mar 18, 2019 @ 10:14pm
hunger should be adjusted for deadhive like it is normal hivers, since the game refills their hunger and doesn't expect them to be recruited, they have 1.0 hunger rate, which is abysmal for what they bring to the table. please fix, if you don't, I understand since you said you wouldn't edit stats, but this feels dire

turbogum  [author] Mar 13, 2019 @ 2:32pm
Well, it wouldn't really make sense lore-wise, and it would conflict with the new version that I'm working on (basically the recruits would get beaten up immediately after spawning by other NPCs). I might add some recruitable Fishmen, Fogmen and Southern Hivers to their major locations, but that would also require you to start the game with one of the racial starts that I'm going to add in the next update.
< >