Store Page
Garry's Mod>  Workshop > Blast da' Lizard's Workshop
This item has been removed from the community because it violates Steam Community & Content Guidelines. It is only visible to you. If you believe your item has been removed by mistake, please contact Steam Support.
This item is incompatible with Garry's Mod. Please see the instructions page for reasons why this item might not work within Garry's Mod.
Current visibility: Hidden
This item will only be visible to you, admins, and anyone marked as a creator.
Current visibility: Friends-only
This item will only be visible in searches to you, your friends, and admins. 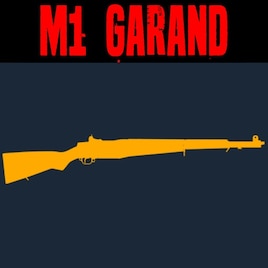 This item has been added to your Subscriptions. Some games will require you to relaunch them before the item will be downloaded.
In 1 collection by Blast da' Lizard
Blast's Addon Collection

31 items
Description
The M1 Garand is a .30 caliber semi-automatic rifle that was the standard U.S. service rifle during World War II and the Korean War and also saw limited service during the Vietnam War. Most M1 rifles were issued to U.S. forces, though many hundreds of thousands were also provided as foreign aid to American allies. The Garand is still used by drill teams and military honor guards. It is also widely used by civilians for hunting, target shooting, and as a military collectible. The M1 rifle is fed by an "en bloc" clip which holds eight rounds of .30-06 Springfield ammunition. When the last cartridge is fired, the rifle ejects the clip and locks the bolt open. The M1 is now ready to reload. Once the clip is inserted, the bolt snaps forward on its own as soon as thumb pressure is released from the top round of the clip, chambering a round and leaving it ready to fire. Although it is not absolutely necessary, the preferred method is to place the back of the right hand against the operating rod handle and press the clip home with the right thumb; this releases the bolt, but the hand restrains the bolt from slamming closed on the operator's thumb (resulting in "M1/Garand thumb"); the hand is then quickly withdrawn, the operating rod moves forward and the bolt closes with sufficient force to go fully to battery. Thus, after the clip has been pressed into position in the magazine, the operating rod handle should be released, allowing the bolt to snap forward under pressure from the operating rod spring. The operating rod handle may be smacked with the palm to ensure the bolt is closed. Several accessories were used with the Garand rifle. Several different styles of bayonets fit the rifle: the M1905 and M1942, both with 16-inch (406 mm) blades; the Model 1905E1 with shortened 10-inch (254 mm) blade; the M1 with 10-inch (254 mm) blade; and the M5 bayonet with 6.75-inch (171 mm) blade. The one available for this mod is the M1905.
This mod is only available in TFA Base.

If you want to give suggestions, put them in my weapon suggestion section.
< >
78 Comments

chassvhoward Feb 2 @ 1:46pm
there should be a sawed off m1 grand

Yes I know. No It doesn't have them.

Press the button that you've bound for suit zoom.
< >