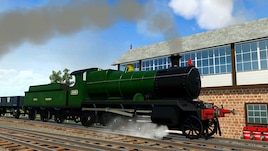 JK
Offline
See all 83 collections (some may be hidden)

This item has been added to your Subscriptions. Some games will require you to relaunch them before the item will be downloaded.
Description
3 versions. Available 1911-1966.

The GWR 4300 class were 2-6-0 engines, known as Moguls (from the American name for the wheel arrangement). Designed for passengers and freight, they used the existing wheel base of the 3100 class tank engines and other standards parts. They proved to be a very sucessful mixed traffic design. 342 were built between 1911 and 1932, of which 2 have been preserved.

In 1932 Collett built a final batch of twenty 4300 class engines, these were notable for their larger cabs with side windows.

JK  [author] Mar 6, 2019 @ 11:25am
@pauliei - I recently added some new variants to the V22 van mod. I think it'll mostly be small updates existing mods next. Nothing big being started imminently. Thanks.