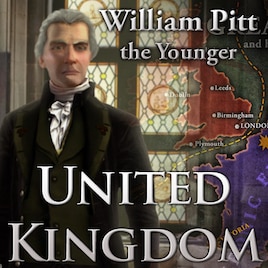 DarthKyofu
Online
See all 26 collections (some may be hidden)

This item has been added to your Subscriptions. Some games will require you to relaunch them before the item will be downloaded.
Description
Adds Pitt the Younger, Prime Minister of the United Kingdom for much of the Napoleonic Wars, to the game!

Pitt
UA: Atlas of our Reeling Globe
Receive interest on your Treasury every turn. Purchasing a Naval Unit contributes Production towards the next one of its kind.

UU: Flagship
Replaces the Frigate (Ship of the Line with EE). Receives an increasing Attack Bonus against Units and Cities as it moves further away from the Capital, and a stronger Defence bonus the closer it is to the Capital. Has a chance to capture neutral Units that it begins its turn adjacent to. +2 Movement to Admirals starting turn with it.

No custom music bc idc enough to bloat the file size

Eh this one's pretty good, I'm pretty sure I've spelt receive wrong in various places but w/e. Impressment effect on UU is basically useless but is also qt so is totally worth the adjacent plot iteration.

I don't need to say it requires BNW, right?

Well regardless since a surprising number of people don't have them all still, mod has only been tested with all DLC, inc. civ packs, and can therefore only be guaranteed to work under said conditions.
< >
13 Comments

And this the developers should have implemented instead of giving AI 'free gold'. (But I guess it takes a creative mind to come up with this idea.) For a human player, however, this makes the game far too easy.

Daeva Feb 11, 2019 @ 6:12pm
Clever way of phrasing "gain Gold by having Gold" (Which would be a funny UA in its own right if one meant Gold as money and the other resource).

Chrisy15  [author] Feb 11, 2019 @ 1:13pm
There is a button that says Subscribe. You click it. If the mod doesn't then show up on the Mods screen, you use the dropbox download, drag that .civ5mod file into your Documents/My Games/Civ 5/MODS folder, and extract it using WinRAR or 7-Zip.