Greenlight > Games > From The Depths's Workshop
Greenlight is being retired. For more information on how to submit games to steam, refer to this blog post.
This item has been removed from the community because it violates Steam Community & Content Guidelines. It is only visible to you. If you believe your item has been removed by mistake, please contact Steam Support.
This item is incompatible with Greenlight. Please see the instructions page for reasons why this item might not work within Greenlight.
Current visibility: Hidden
This item will only be visible to you, admins, and anyone marked as a creator.
Current visibility: Friends-only
This item will only be visible in searches to you, your friends, and admins.
From The Depths
Description Discussions9 Announcements5 Comments481 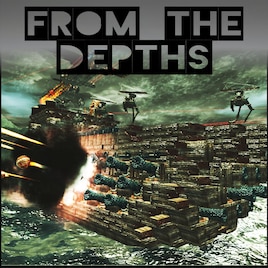 View From The Depths in the store

From The Depths has made it's way to steam and launches today!
Check out the store page here

Thanks for all your support along the way and I cannot wait to see what you think of the game!

It's been an age since we posted news on Steam as we spend as much time as possible knee deep with the community implementing suggestions, fixes and new content over on the forums [www.fromthedepthsgame.com] ! It's been four or five months in fact since we posted news here and so much has happened!

Customisable gun emplacements
Firstly we have a brand new mechanic for building customisable cannons / gun emplacements. You can place the firing piece, connect as many meter long barrel segements as you like (four types of barrel are currently available) then build a larger superstructure onto which you can place autoloaders and auxiliary tools like fall of shot predictors. Into the auto loaders you can choose to place explosive or armour piercing or standard rounds. There are also components that increase the gauge of the weapon, allowing for up to a 1.5 meter diameter shell to be fired! This system allows everything from an anti aircraft machine gun to the largest of howitzer artilery pieces to be created- and more cannon componets are planned including fragmentation warheads, with air burst support, multi barrel firing pieces and a range of components for creating different types of laser weapon.

Customisable missiles (and torpedoes, mines, depth charges)
You can now connect multiple launch pads to a single missile firing computer and by placing variable length gantries on the launch pads create missiles from 1 meter in length to 30 meters in length. With each meter of length comes two customisable missile components. There are currently 19 of these implemented, some examples are : fragmentation warhead, explosive warhead, thruster, fuel tank, sonar seeker, fins, laser proximity fuse, safety fuse, propeller, ballast tank, regulator, magnet, laser beam rider receiver, laser designator receiver, infra-red seeker and augmented proportional navigation guidance module. There is no restriction on what you can build: you can have a missile that fires out of a plane, uses an IR seeker to aim at a boat, cuts the engine after a second, falls into the water, activates a sonar seeker and propeller, gets within range of the boat, uses the magnet to help ensure a hit, and detonates a mixture of explosive and fragmentation warheads via the use of a proximity fuse. About 50% of the components allow for a customisation, such as the delay before starting a thruster or the blast angle of the fragments of a fragmentation warhead.

Customisable engines
We got bored of seeing walls of engines stacked up.. so we ripped them out and made customisable engines. Place the engine block then connect as many crank shafts as you like. Then place cylinders on the crank shafts, carburettors and exhausts on the cylinders, super chargers, fuel injectors and tanks on the carburettors! It's a really fun mini game to try and get the most power output and fuel efficiency out of the smallest most compact and cheap engine!

Customisable AI
We used to have a single AI block that would take control of a ship. This wasn't fun as you couldn't control it and you shooting the ship did no damage to the AI unless you hit this specific block. This urged us on to make on of From The Depths finest features : Customisable AI.
Start with a mainframe. Place the equivalent of PCI slots around it. Insert into those different behaviours and algorithm enhancements on "cards". Some examples of the cards you can use are: "Target Prioritisation", "Aim Point Location" or the ability to fly a plane using "Aerial AI" or drive a ship using "Naval AI".
Now for the eyes and ears! Use a chain of physical connector components or a wireless receiver and transmitter combo to build external laser detectors, laser trackers and radar blocks. These guys pick up the enemy targets and pass them to the mainframe. Any available trackers will track detected targets and estimate their speed for you allowing for precise use of your projectile weapons.
Now for the hands... use connectors or wireless to connect the mainframe to local weapon controllers. Place these under turrets, missiles or customisable cannons and they will shoot at which ever targets the mainframe have on record.
This setup (which we add to often) allows the player to totally customise how much control the AI has over a vehicle- it also allows damage to the vehicle to impair particular AI function, which is really fun!
Control blocks
You can now place control blocks- you can set their input (such as altitude, damage, player interaction, a laser tripwire, etc) and their effect. You can use these to launch hot air balloons if you fall in the water or start spinning melee weapons around on shredding arms when you approach another vehicle. Loads of options and a lot of fun!

Alpha launch
The alpha was released to the early donators on January the first 2014. It was extremely well received and for the last six weeks no less than 20 updates have been put out with new content, new game mechanics, bug fixes etc. The community have been amazing and built stuff we never imagined possible! Here are some examples, and you can find many more here:

And an album here
ALBUM
Here is a nice video an alpha player put together showcasing a submarine with a massive amount of AI control, engaging some really nasty enemies.

And of course there is our lovely new official trailer!

Green light
We were green lit a few days after the alpha was released! Thanks so much for your support! Whilst we prepare the game for Steam release you can join us in the alpha testing at our website [www.fromthedepthsgame.com] for only $10 (or as much as you can afford!)
Read More
Description
Release date: Early 2014
In From The Depths you can build and take first-person command of battleships, planes, submarines, space ships, hot air balloons and more. The game is currently in open-alpha and contains a wide range of single player content including:

Links
Follow the links in the links section or go to:
The central hub of From The Depths is the Forum![fromthedepthsgame.com]
Facebook page for the highlights [www.facebook.com]
twitter


From The Depths is now in alpha looking for testers and feedback. Whilst the game is made compatible for its Steam launch you can secure a copy here! [www.fromthedepthsgame.com]

Thank you for all your votes and helping to get the game Green Lit!

From The Depths  [author] Aug 1, 2014 @ 8:10am
Good news CPTSulu you don't have to wait much longer. From The Depths will be released on Steam early access on the 8th of August 2014 (one week today!). The community HUB and store page are now live if you'd like to take a look around!

Some of like :
- Multiplayer lobby system added- but you cannot yet launch the game.
- Character sheet (level, items, skills etc) is persistent across all game modes
- AI tutorial added
- Debris consisting of a single block is now more efficiently created and managed.
< >

From The Depths has been Greenlit and is now listed in the Steam store. For the latest information, purchase options, and discussions for From The Depths, please see it on the Steam Store or in the Steam Community.
Visit Store Page
For more details Visit Community Hub
For latest discussions
If you really, really want to, you can continue to the Greenlight page. Information on this page may be out of date, since all the action has moved to the areas noted above.