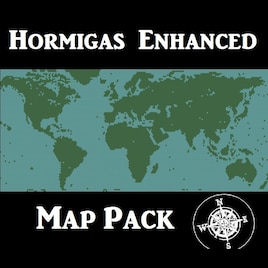 Shield Hero V
Offline
See all 272 collections (some may be hidden)
You need DLC to use this item.

This item has been added to your Subscriptions. Some games will require you to relaunch them before the item will be downloaded.
Description
With Gedemon's awesome help and quite a bit of XML editing and testing, I was finally able to exceed the 22 Civ limit of PtWE and at the same time provide a setup menu for all 4 of my maps.

This mod allows you to select gameplay elements like barbarians, victory conditions, speed and difficulty as well as other options like the Civs that you want in the game. For PtWE, click "Add AI Player" for up to 43 Civs.

Note: You don't need to have any of my other maps installed. The pack inherently contains them. So, if you own BNW and all other game expansions and DLCs, this is the recommended way to go.

TSL maps included in this pack:

What you will need:

At least 4 GB RAM, 64-bit Windows and a quadcore CPU for PtWE.

REQUIRED:
YnAEMP dll for 43 Civs
This mod requires the 43 Civ dll for YnAEMP which must be activated during the game setup!
http://steamcommunity.com/sharedfiles/filedetails/?id=159305629

Other mods that I recommend for a better experience:

All mods are available here on Steam Workshop.

Blank leader screens:
Above a selection of 22 Civs, the leader screens will be blank and without 3D animations. I recommend the YnAEMP DLL Leader fix for BNW to replace blank screens with static 2D screens.

City states:
Due to the randomization at game start the city states that appear in the game and their number may vary, despite your selected slider value!

IMPORTANT: There are only a few city states on the Europe maps at the moment! I hope I can fix this in the future...

Workshop problems
If the mod doesn't show up in your list, delete the game cache in username\documents\\My Games\Sid Meier's Civilization 5\cache and restart the game.
Popular Discussions View All (6)

asar_sema Nov 8 @ 3:54am
great mod, one of the best maps, however is it possible to have a random start rather than civs only being able to spawn at their fixed locations?

SmuGMuggeR Mar 22, 2020 @ 6:15am
I used to have the runtime issue a lot and gave up on this mod, but i got it again recently on a normal save and found that if i go through mods and load them first, THEN load my save, i bypassed the error. Excited to try the mod again, its really disappointing to get so far just to not be able to load a save but im gonna give it another shot, ill let ya know

Captain-Erwin Nov 6, 2019 @ 4:43pm
anytime I am trying to load a savegame, I get a runtime error and game crashes. I´ve seen that other players have the same issue, so any help to fix that would be much appreciated!

ruler_ruler_hi4_seeker_4_seeker Nov 5, 2019 @ 12:54am
Ladies, gentlemen, and others, the 43 civs dll is not compatible with other dll mods! If you have other dll mods installed and activated, you must first de-activate them for 43 civs dll to work.

That aside, I was wondering, how would one go about increasing the number of playable civs on the Atlantic Discovery map? I know that it only allows 22 civs, currently, but is there a way to change that?