Greenlight > Games > Behold Studios's Workshop
Greenlight is being retired. For more information on how to submit games to steam, refer to this blog post.
This item has been removed from the community because it violates Steam Community & Content Guidelines. It is only visible to you. If you believe your item has been removed by mistake, please contact Steam Support.
This item is incompatible with Greenlight. Please see the instructions page for reasons why this item might not work within Greenlight.
Current visibility: Hidden
This item will only be visible to you, admins, and anyone marked as a creator.
Current visibility: Friends-only
This item will only be visible in searches to you, your friends, and admins.
Chroma Squad
Description Discussions9 Announcements20 Comments563 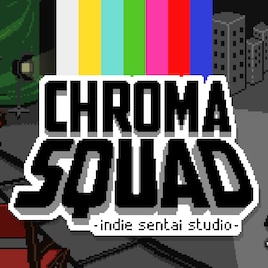 View Chroma Squad in the store

Welcome to our first major Beta! For the first time you will be able to play the entire game, start to finish!

Keep in mind that this is still incomplete and VERY buggy. If you choose to experience the entire game right now, you will have an inferior experience than you would on release day - but you will help us make a much better game for everyone!


BIG KNOWN ISSUES
----------------
- Armor Customization has a few wrong icon-to-sprite relationships;
- Boss Fights unbalanced and unpolished, will change greatly;
- All companion characters lack balance and skills;
- Kaiju bosses are currently only activating one of their skills;
- Economy requires further balancing, especially Season 4-6;
- Several Director Instructions are currently broken;
- A few skills don't work as intended;
- Camera behaving badly at some dialogue sections (you might want to click in the scene to skip a dialogue that is currently missing if that's the case);
- Only one of the different endings in the game has a cutscene;
- Combat HUD lacks a lot of information, especially status effects;
- Last Episode (Season 6) is incomplete and buggy;
- Special suprises after the ending are missing;


So that's right, we are a month away from the release and there you are, before the weekend, for everyone. You might expect bugs which is pretty much normal but we have plenty of time to fix them. Not every bug we had in the previous list was actually fixed but we needed to rush for a few things.

I really hope you enjoy the game and story. <3

The newest beta version for Chroma Squad is already out!

- New season 03 available (7 more episodes). That means almost 60% of the game content.
- We have already completed all remaining content of the game, but it's still private (and still needs to be heavy tested).
1 - Don't stream, don't screenshot, don't record.
2 - Please, do not share any image from Season 03 and beyond publically.
3 - We don't want to ruin the story experience for the ones who can't play yet.
4 - The full content will be available for the most dedicated testers in the end of March.

With this updated we take our first step towards what we call "Combat 2.0", with significant changes to the feel and pacing of our fights. Our goal is to take Chroma Squad even closer to its Tokusatsu inspiration by making combat faster, flashier and with increasing numbers of enemies. We are also focusing on the long game and making sure that, as you fight your way through Seasons 4, 5 and beyond, you will feel your characters becoming more powerful.

Here are the major changes:

- The "Defense" attribute has been removed from the game;
- The "SP" or "Special" system has been removed from the game;
- All skill use, including Weapons, is now bound by Cooldowns only;
- A new attribute called "Skill Regen" has been added to Roles and Items. Stacking more points into it allows you to use your Skills more often;
- Nearly all attacks in the game knocks characters back at least 1 tile;
- Major changes to all skills. Most utility/support skills such as "Mend Friend" and "Find Weakness" are now free actions;
- Completely revised damage scale and monster attributes - monsters will no longer scale on each Season to match hero power;
- Bosses no longer have multiple life bars;
- Mecha Fight received a bit of love with lots of new skills and new balance for the Kaiju monsters;
- A lot of bug fixes
- And probably a lot of bugs to be found by you!

So, what is Sentai? Our game is based on 90's Tokusatsu TV series, like "Power Rangers", "Flashman", "Changeman" or... "Captain Planet And The Planeteers". Yep, any group of 3 or 5, each with different powers, whose union makes a special weapon appear to defeat their enemies. In this case, Captain Planet himself. =)

In Chroma Squad you'll see tons of references, including riders Tokusatsu, solo heroes, and every bit of our geeks 80 and 90's culture. So, get ready for a experience full of color!

The main story of our game is about a group of stuntmen that decide to make their own sentai TV studio. You become their manager, hiring actors, purchasing awesome cameras, and making everything explode with your special effects. But their adventure becomes so exciting, that they start thinking that everything is actually real.

The game is currently on Kickstarter, and the expected launch date is the end of the 2015.
Here's a quick list of what you can do in the game:

Sae Loveart Apr 7, 2015 @ 1:40pm
A sharp strategy game with beautiful pixel art. I love the premise and its sense of humour.

Chroma Squad has been Greenlit and is now listed in the Steam store. For the latest information, purchase options, and discussions for Chroma Squad, please see it on the Steam Store or in the Steam Community.
Visit Store Page
For more details Visit Community Hub
For latest discussions
If you really, really want to, you can continue to the Greenlight page. Information on this page may be out of date, since all the action has moved to the areas noted above.